Dormition of Theotokos: The ‘Easter’ of Summer

Source: Greek Reporter
Natalya Mihailova | 16 August 2015
Greeks consider the Dormition of Theotokos on August 15 to be the “Easter” of summer and celebrate it with great splendor throughout the country. 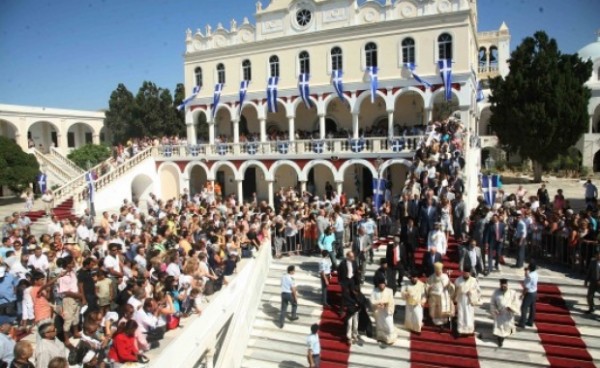 In Imathia, Central Macedonia, faithful from Greece and abroad visit the Panagia Sumela Monastery, a historic church located near the village of Kastania. The church was built in 1951 by Pontian refugees, in memory of the historic namesake monastery, located on Mount Mela, near Trabzon in Pontus. The monastery hosts the miraculous icon of the Virgin Mary, which was created by Apostle Luke.

The Holy icon procession is followed by numerous cultural art events, where Pontian music groups from Macedonia entertain the crowd with traditional tunes.

Religious and cultural celebrations are also held in a church dedicated to the Dormition of Mary in Palaiopyrgos, Ioannina. The Greek village’s cultural association organizes a day-long festival, where people gather at the church courtyard and share a meal.

The faithful recreate an old tradition where they name one citizen the “doli pasha.” This person needs to raise a glass of wine to every single person that is present in the courtyard and then drink three sips. Then everyone takes turns to make wishes. The tradition was created a long time ago to dissolve any misunderstandings between the village residents.

In the northern Greek island of Thassos, people share a meal consisting of potatoes, rice, beef and stew outside the Greek Orthodox church in Panagia of Thassos, a Greek village named after the Virgin Mary. After the icon procession, all the faithful gather in the church courtyard to celebrate with food, wine, music and dances.

The pilgrimage to Panagia of Tinos is probably the largest religious pilgrimage of Hellenism. Tinos, is a Greek island closely associated with the Virgin Mary, and thousands of believers flock to the island every year to venerate the miraculous image of Virgin Mary and say their vows. The Virgin Mary epitaph procession is similar to the Epitaph procession on Holy Friday. The festivities last until August 23 and, along with celebrations for the Virgin Mary, the islanders also commemorate the anniversary of the torpedoing of warship Elli that was sank by Italians near the coast of Tinos, on August 15, 1940.

Believers also gather on the Greek island of Paros, where Panagia Ekanontapyliani -one of the most impressive and well-preserved churches in the Aegean- is located. On August 15, people from Greece and abroad gather in Parikia to venerate the image of Panagia Ekatontapyliani (created in the 17th century) and take part in the festivities. At the same time, in the port of Naoussa, dozens of boats approach the pier, carrying lit torches.

Finally, in Kefalonia, the faithful gather in the courtyard of the Panagia Fidousa Holy Monastery in Markopoulo, to see the small snakes that appear every year on August 15 in the belfry and the church committee collects them in the Holy Temple’s yard. According to tradition, the snakes bring good luck to the island. If they do not appear, it is a bad omen. For example, they did not appear in 1953 when Kefalonia was hit by a large earthquake.