Source: No Other Foundation
It is easy to loudly declare one’s loyalty to the local parish family, and one’s humble submission to the Church’s hierarchy. A sudden crisis reveals exactly what those protestations of loyalty, humility, and perseverance are worth.
Archpriest Lawrence Farley | 04 October 2020 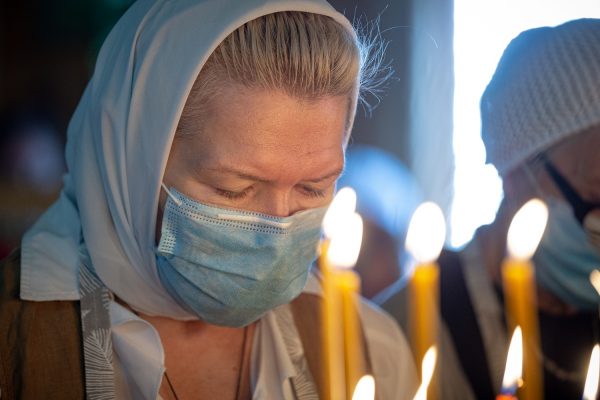 Recently I was talking with a dear Christian friend of mine about the challenges presented by the Covid pandemic and he opined that the pandemic is winnowing all the churches. I couldn’t help but agree.

For city-slickers like myself who might not know about the process of “winnowing”: in the agricultural world of past centuries, wheat needed to be winnowed after it was harvested before it was of any use. In those days (such as the days of the Old and New Testament) wheat was harvested by cutting down the stalks. Those stalks lay in the field and were gathered up by hand. Within the heads of those stalks, the wheat which could be used for making bread was mixed with the chaff which was useless for making bread, and so the wheat need to be separated from the chaff.

This was accomplished by a process known as “threshing”. In Biblical days, this meant dragging a large weight over the stalks (usually with the help of a large animal, such as an ox), crushing the heads of the grain and thereby separating the wheat from the chaff. Then the farmer completed the process by winnowing. That is, he took a large fan-like shovel or fork, gathered up large shovel-fulls of the mixed wheat and chaff, and threw it into the air from the threshing floor. The chaff, being lighter, would be carried away by the wind, while the wheat, being heavier, would fall back to the ground. At the end of the process of winnowing, the threshing floor would contain only the wheat, the chaff having been blown away. Everyone in the old days was intimately acquainted with this process, which is why St. John the Baptizer could use it in describing the work of the Messiah. John said that the Messiah’s winnowing fan was in His hand, so that the process of winnowing—i.e. separating the wheat from the chaff in Israel, the good from the bad, the penitent from the proud—was about to begin (Matthew 4:12). One should therefore repent, he implied, lest one be blown away by the wind and miss the restoration that the Messiah would bring.

Our current pandemic, like all crises ancient and modern, winnows all that it touches, revealing what is within our hearts. A crisis of persecution does this equally well: in the mid-third century, for example, the Church had experienced a period of peace and tranquility for many years. It became prosperous and lax. All of its members said, of course, that they were totally committed to Christ and were willing to die for Him. Then in 250 the Emperor Decius began a savage persecution of the Church empire-wide, and those confessions of loyalty were put to the test. At the end of the day, about half the people in the Church lapsed and apostasized, offering sacrifice to the gods in order to save their lives. They were, as it turned out, not ready to die for Christ after all. The Decian persecution winnowed the Church, separating the committed wheat from the nominal chaff.

Our current pandemic is doing the same sort of thing. It is easy to loudly declare one’s loyalty to the local parish family, and one’s humble submission to the Church’s hierarchy. A sudden crisis reveals exactly what those protestations of loyalty, humility, and perseverance are worth. I remember one person sharing with me that as the Covid pandemic progressed, about a quarter of his parish seem to vanish and was nowhere to be seen. Another priest shared the story of a parishioner leaving the Communion line and screaming in protest over the way that Holy Communion was being administered by the priest. What does this mean? It means that the Church is being winnowed.

More importantly, what does all this mean for those who are left? It means that the current pandemic is a refining fire as well as a winnowing fan.

In Biblical days, all precious metals were subject to the refiner’s fire. Gold, for example, was placed in the hot fire of the refiner’s furnace to melt away all the impurities, removing the dross and leaving only pure, refined gold. That, I suggest, is what the current pandemic is accomplishing in those of us who remain.

It is horrible, of course. No one enjoys the heat of a refiner’s fire. To be hot enough to melt away impurities, a fire needs to be hot enough to make the gold truly uncomfortable. A furnace rather less heated might be more comfortable and easier to endure, but it would be useless for the purpose of smelting away impurities. There is nothing for it: if we are to be refined gold at the end, we need to endure the fire of the furnace. St. Peter knew this, and he compared the persecution that his new converts were experiencing to the refiner’s fire: “In this [hope of final reward] you rejoice, though now for a little while you may have to suffer various trials, so that the genuineness of your faith, more precious than gold which though perishable is tested by fire, may redound to praise and glory and honour at the revelation of Jesus Christ” (1 Peter 1:6-7). Persecution acts as a refiner’s fire. So does the current pandemic.

Much of the heat comes from the fact that we do not know when the pandemic will end and when we can return to ecclesiastical normal. If only we had a date, and knew when the light at the end of the tunnel would arrive! That would make it so much easier. But in fact we don’t know the date. All we know is that each wretched and fiery weekend brings us closer to the end, and is one less Liturgy we will have to serve under these wartime conditions. Or, to paraphrase St. Paul, “Salvation [or the end of the crisis] is nearer to us now than when we first believed [or when the pandemic began]” (Romans 13:11).

The good news is that refined gold is better than unrefined gold, and brings a greater reward from the Lord of the contest. God has evidently allowed this pandemic, so the only way out is through, and the only thing that ultimately matters is how we will respond to the fire.

While we remain in the furnace we should pray, be patient with everyone around us (especially with those we disagree with about the pandemic), go to Liturgy as we are able, and use this as an opportunity to rededicate ourselves to our parish family and the clergy that lead it. If we do this then we will emerge from the fire refined, stronger and better than we were before. It is likely that we shall need such unity and strength in the future, for the persecution and fire that the Antichrist will bring with him will be much hotter.

This pandemic, like all crises throughout history, will have an end. We must not look at the pandemic, but through it and past it, with our eyes on the horizon. For the Lord is coming, and the reward that He will give us for our perseverance will be eternal.