The Feast of Pentecost Celebrated at the Patriarchate of Jerusalem 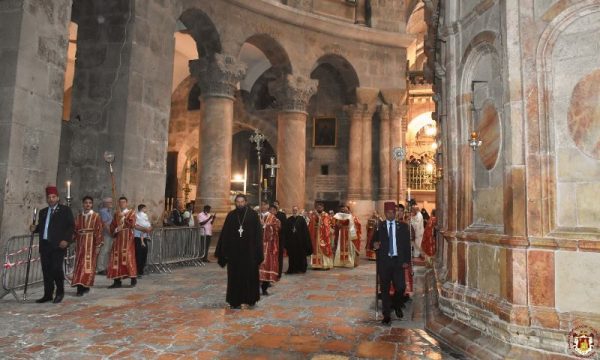 On Sunday, 20 June 2021, the Patriarchate of Jerusalem celebrated the feast of the Holy Pentecost.

On this feast, the Church commemorates in thanksgiving and doxology to God, that on the fiftieth day after His Resurrection, and ten days after His Ascension to the heavens, our Lord Jesus Christ sent the Holy Spirit through the Father to His Disciples, who were gathered at the Upper Room of the Holy Zion. The Holy Spirit appeared like “a violent breath” in the form of tongues of fire. The Holy Spirit strengthened and enlightened them and made them narrate in tongues the marvels of God to the gathered crowd. Apostle Peter preached to them and on that day “three thousand souls” were added to the Church (Acts 2:41).

The Patriarchate of Jerusalem celebrated this feast with Vespers on Saturday afternoon at the Church of the Holy Sepulchre and with the Divine Liturgy on Sunday morning at the Holy Tomb, led by His Holiness Patriarch of Jerusalem Theophilos. Co-celebrants to His Beatitude were their Eminences; Metropolitan Isychios of Kapitolias, and the Archbishops; Theophanes of Gerassa, Aristarchos of Constantina, and Theodosios of Sebastia, along with Hagiotaphite Hieromonks, with first in rank Elder Kamarasis Archimandrite Nectarios and Deacons. The chanting was delivered by Hierodeacon Simeon on the right and Mr Vasilios Gotsopoulos on the left, as the Service was attended by the Consul General of Greece in Jerusalem and many faithful Christians who received the strength of the All-holy Spirit.

After the Divine Liturgy, the Vespers of the Monday of the Holy Spirit was observed, and the prayers of the kneeling Service of Pentecost were read, while all people were down on their knees.

After the Services, bells tolling, the Patriarchal Entourage returned at the Patriarchate Reception Hall, where His Beatitude wished everyone the enlightenment of the Holy and Ceremonial Spirit.