The Forgotten Genocide, a film on the Syriac genocide at Damascus Opera House

Source: Syrian Radio & TV
Natalya Mihailova | 27 August 2015
Marking the centennial of the Ottoman genocide against the Syriacs, Dar Al Assad for Culture and Arts (Damascus Opera House) showcased on Wednesday a documentary film featuring photos and scenes of the mass slaughter of the Assyrian (Syriac) people at the hands of the Ottoman troops between 1914 and 1920. 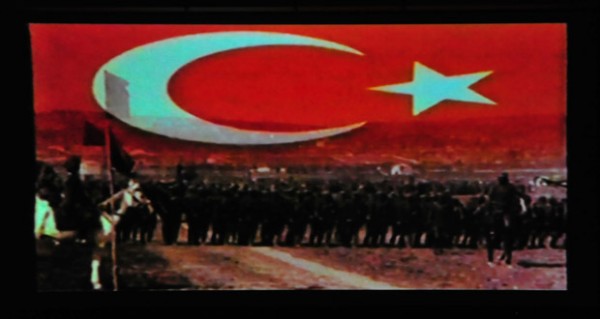 The genocide in question took place in 1915 after WWI, when troops under the command of the Ottoman Empire waged a series of operations targeting Syriac civilians and other groups, claiming thousands of innocent lives and displacing thousands more. This genocide was known as “Sayfo.”

The thirty -minute film put in show photos and documentary video clips from the archive dating back to the period that coincided with the forgotten crimes of the Syriac genocide which claimed the lives of more than 500,000 Syriacs upon a decision by the Ottoman authorities.

The Ottoman authorities, as the film manifested, destroyed all the Syriac cities and villages in some unimaginable way, assassinated all the Syriac and Armenian soldiers serving in the Turkish army on charges of working against the interest of the Turkish state, chased the Syriacs wherever they were and maltreated the women and children.

Patriarch Mor Ignatius said in a statement to source that the film is a response to the systematic destruction of the archeological and art sites in Syria, mainly the destruction of the ancient temple of Baalshamin and the brutal murder of Khaled al-Asaad, retired chief archaeologist of Palmyra, perpetrated by the Islamic State in Iraq and Syria (ISIS) terrorist organization.

He asserted that the Syrian people persist on commemorating the centennial of the genocide because what is going on now in Syria is a continuation of that genocide.

The patriarch pointed out that the sides standing by terrorism, that Syria is suffering from nowadays, are the same sides that committed the genocide against the Syriacs and Armenians.