Source: DECR
Natalya Mihailova | 13 June 2016
The Holy Synod of the Georgian Orthodox Church met for a regular session on June 10, 2016. It was chaired by Catholicos-Patriarch of All Georgia Iliya II. 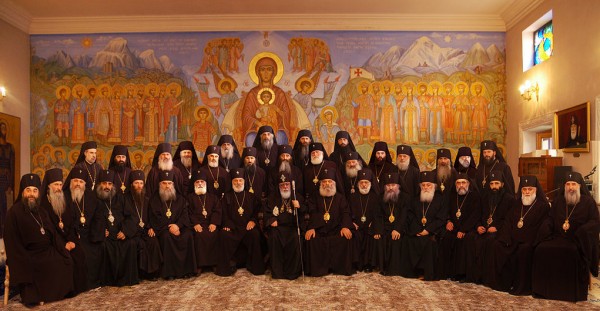 Metropolitan Andrew of Gori and Ateni, representative of the Georgian Church in the Secretariat made a report. He said in particular, “the goal of the convocation of the future Council is to demonstrate Orthodox unity before the world community and to express the common position of the Orthodox Church on the burning problems of today”. However, this goal cannot be achieved for several reasons: the Eucharistic communion between the Churches of Antioch and Jerusalem has not been restored; in addition to the Church of Antioch, the Churches of Bulgaria and Serbia refused to participate in the Council; several documents including “Relations of the Orthodox Church with the rest of the Christian World” contain dogmatic, canonical and terminological inaccuracies and require a serious review; the Church of Antioch did not sign the 2016 Resolution of the Primates of Churches whereby it was decided to convene a Pan-Orthodox Council and she did not sign the Council’s Working Procedure either due to the fact that this document cannot be considered approved; the established Secretariat of the Council has proved to be nonfunctional since it has not been given the right to make decisions, etc.

After that a discussion took place. As is noted in the official report, “In spite of different opinions, the basic position was manifested in that it is possible to solve the existing problems through active work. Therefore, we together with other Churches also ask to pospone the Council until the general unity is achieved”.

As a result of the session, the Holy Synod unanimously resolved that the delegation of the Georgian Church will not take part in the Pan-Orthodox Council to take place on the Island of Crete.