The Girl that I Marry 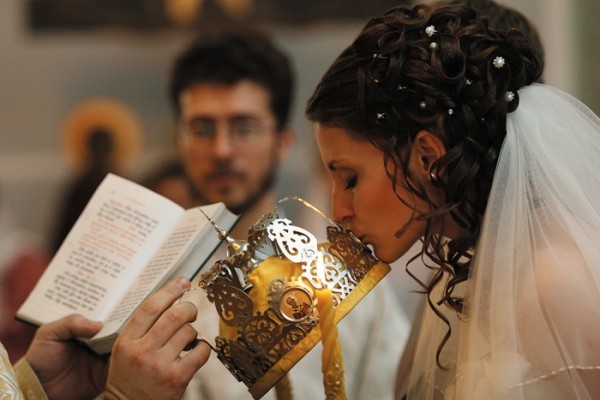 “Magnify the Lord with me and let us exalt His name together” (Psalm 34:3)

In pre-revolutionary Russia, when a seminarian proposed to the girl he hoped to marry and to have as his life’s companion, consort or“Matushka,” he would send her a note with the above words from the Bible. See what it suggests? You and I with God to guide us will go through life having a common purpose. Yes, marriage is about love, but it includes the Source of love, the greatest Teacher of affection between a man and a woman, because He gives meaning to life itself. Let them expand their understanding of God’s mighty deeds in creation in ways that Adam and Eve would not achieve. To magnify the Lord is to increase our own souls and broaden our perspective of His mighty works. To exalt the Lord is to sing praises to His name not only by our voices, but also by our deeds. How we live amplifies His glory beyond the chanting of our prayers.

Certainly one can do that on his own; however, the prayer to “Our Father” is enhanced when two or more utter the phrase “hallowed be Thy name.” It includes the entire Church not only globally but also along with those who have gone before us to their rest. Yet in the parish and the community the joint effort to augment the awareness of God’s presence in the lives of others is a glorious way to “exalt His name together.”

The beautiful phrase is not only for priests’ families. Every married couple can make it their motto. When two people choose to be wed in the Orthodox Church, they are committing themselves to welcome the Holy Trinity in their lives. Being crowned with honor and glory is assuming responsibility for a realm that includes home and offspring. It presumes engagement with obstacles that come about from time to time that thwart and challenge the royal couple. Your wife is always your best friend. She must never be treated as an object, or in the degrading phrase our fallen culture uses: arm candy. The reason OJ Simpson went from national football hero to persona non grata in the nation was not only because he got away with murder, but because he was unable to let Nicole be herself. She was for him a possession, not a person.

And the wife must bear in mind: Your husband is also your neighbor, in the image Jesus used to explain the definition in the parable of the Good Samaritan. This culture so intent on avoiding sacrifice and pain will do little to restore harmony in the home—but the third Partner will never fail. They are blessed by Jesus Christ, He who was at their wedding as He was in Cana of Galilee, He who hears every prayer and responds to every heartfelt plea.

But it’s imperative that the man and wife grow together in mutual respect and support. They are like mountain climbers tied to each other. They both must struggle ever onward and upward. When one fails to keep up his end, the other will fall with him.

Even when they both share the tasks, to exalt the Lord together means that they grow beyond selfishness. I’ve had so many cases where they appreciated the counseling, congratulated choir and me for a glorious wedding, then dropped out of Church commitment, even if they had formally been active members. In a way, they extend the honeymoon to shut all others out. When that pattern of self-indulgence becomes the norm, they are cut off from the life of the Church and exist only in the secular society. If the Lord and His Church no longer have a place in their homes and lives, what can they expect from their children?

Being of One Mind: What It…

One of the themes that resounds throughout St. Paul’s epistles is the…

They rescued children on the highway, helped an ambulance and sheltered strangers.

Most viewed articles
Healing the Inner Pharisee157
Our Unity in Christ100
Patriarch Theophilos III of Jerusalem: Our Common Commitment is to Gather for Prayer and Fellowship72
Metropolitan Hilarion: Christians in the Middle East and Other Countries Need Both Our Support and Prayer56
How Ural Residents Survived a Blizzard42
Being of One Mind: What It Is and Isn’t29
Most popular authors
Archpriest Stephen Freeman157
Pravmir.com team128
Abbot Tryphon100
Irina Sycheva42
Archpriest Michael Gillis29