The Good Unbelief of Thomas 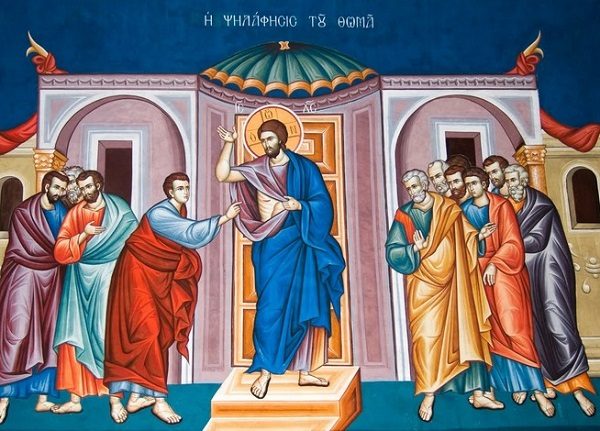 In one of its hymns, our Church calls the unbelief of Thomas “good”. Understandably one would wonder – is there good and bad unbelief? There seems to be, because humans are not purely good or evil. In one who has a clean conscience, good heart and humble thought, everything is clear. In one infected with the virus of unbelief, all is dark and troubled. If only we had the good unbelief of the Apostle Thomas!

We would say that doubt, hesitation and little faith, are normal to a man who seeks God with the mind.

The Apostles of Christ begged Him to add faith to their existing faith. Unbelief, however, is a serious spiritual illness. Faith is beyond reason and unbelief is unreasonable. Unbelief is often dense, comes from frivolity and shallowness of thought, and from a volatile life and confused consciousness.

The case of Thomas, who was absent at the onset of the appearance of the Risen Christ to His disciples, is typical. It is a fact that Thomas doubted, and did not disbelieve, but asked for evidence to confirm his faith.

Well known for his enthusiasm in other moments, Thomas is not a skeptic who is isolated and disadvantaged. He dares, he searches, he investigates, he inquires. He asks for the truth, to have direct contact with it. Christ did not have problem offering it to him. He came back to meet him. He comes back to everyone of us.

The faith of many Christians sometimes is lukewarm, colder than unbelief. We have faith as an armor and good outfit to beat others with, but not to take the beating; to be appreciated, admired and be watched. We do not dare to look ever deeper into the beliefs of our faith, we do not in any way want to challenge it, and perhaps expose it. Strong faith gives spiritual health, balance, sturdiness, empowerment, hope and trust in God. Sometimes, let’s not be afraid to admit it, our faith has much evidence of secret ego-pathologies and morbid sentimentality. It reaches even to the point of a mistaken belief in an antisocial skepticism, which offers a pretty bad example to others. Seeking God while being this way, is to backtrack.

Thomas surely was not of bad faith, nor did he believe easily. He was careful, outspoken, genuine, solid, honest and true. It was who he was. His good unbelief made Christ come to him. Christ offered Himself to him for his sincerity. He did not rebuke him, who asked to see Him, to touch Him. But eventually He blessed those who will not see and yet believe.

Unbelief is of course a free choice of each of us. Unbelief says that they base themselves only on what they see and grasp and understand with logic. This is coercion and tiresome easiness. Faith, we would say, comes with difficulty, hazard, risk and daring. This is why He blessed those who believe without tangible evidence. The strongest evidence is the confirmation of our hearts. The hard-to-believe Thomas is our brother, he is weak, but definitely sympathetic.

On Mount Athos this day we all have an all-night vigil, because on such a day we were liberated from the Turkish yoke. As we have learned, the world during the Paschal holidays was more than ever in the churches. This means that faith is not extinguished. But it can become deeper and warmer. Thomas is not for the unbelievers, but for the skeptical, for those with little faith, and finally for the faithful. May his good unbelief trouble us to fertilize us.

Most viewed articles
Metropolitan Hilarion Speaks on Whether It Is Possible for ROC to Reunite with Old-Believers276
Did God Really Order a Genocide?191
The Temple of Woke: Are Universities Basically New ‘Religious’ Training Centers?159
Businessman Buys a 19th Century Church and Returns It to the Faithful100
Turning Trials Into Hope80
Russian and Arabian Clergymen Celebrate the Memory of Prophet Elijah in Israel72
Patriarch Kirill Mourns over the Death of a Prominent Shepherd, Protopresbyter Leonid Kishkovsky66
Patriarch Daniel: All socio-medical care is of Christian origin54
The Guilt of the Modern Era1
Most popular authors
Pravmir.com team516
Archpriest Lawrence Farley193
Eric Hyde159
Fr. James Guirguis80
Aurelian Iftimiu55
Metropolitan Nikolaos (Hatzinikolaou)1