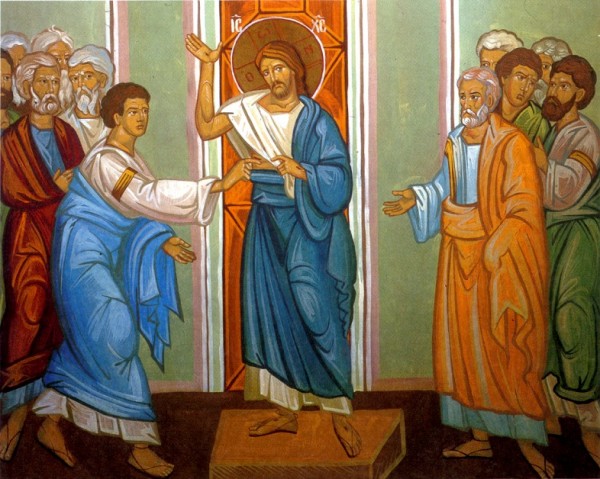 In the Acts of the Apostles, we read that many signs and wonders were wrought among the people at the hands of the apostles.

So many miracles took place in those days, that people who had sick relatives brought them out into the streets, in the hope that the shadow of the Apostle Peter would fall on their sick ones – and they would be healed.

Saint John Chrysostom says all those miracles were like heaven coming down to earth.

There were in fact so many of them that the Bible itself does not contain the vast majority of the Lord’s miracles – the Gospel of John only includes seven of them. But the ones it does contain are included there “so that we may believe that Jesus is the Christ, and that believing (we) might have life in His Name”.

The Apostles witnessed a whole lot more miracles than the seven we read about in Saint John’s Gospel. So you would think that when they received news that the Lord had risen from the dead, they would have believed it.

But they were sceptical. They didn’t trust the Myrrh-bearing Women who went to the tomb and saw the Lord. It wasn’t until the Lord Himself came and stood among them – passing through a locked door, no less – that they believed.

Saint Cyril of Alexandria says that at that moment, when Christ came that night, He also fulfilled His promise that wherever He was present with those who believe in Him, He would give them His peace – which makes you wonder if Christians really have His presence with them today, when His peace is absent in the hearts of so many of us, so much of the time.

But one of those apostles did not believe. He was not there in that locked room. He was absent. He was late.

After all that. After all he had seen in those three years, travelling with Christ, hearing Him preach.

The Apostle Thomas had been there for the Sermon on the Mount.

He had seen the paralytic raised up.

He had seen the eyes of the man born blind recreated – from nothing.

He had even seen Lazarus – dead, four days – called out of the tomb, raised from the dead to foreshadow Christ’s own resurrection.

But Saint Thomas would not believe.

He had witnessed everything – more than any Christian in two thousand years could dream of. Yet he would not believe. Instead, he stated his conditions, and his preferences.

We live in a world that has everything we could dream of, in terms of hearing about Christ.

Every person in our country could (if they chose to) have a copy of the Bible, and everyone has been given lessons, teaching them how to read it.

We have the lives of all the well-known saints, in print, and available online, free of charge.

We have thousands of spiritual books – all in English – as well as tens of thousands of Orthodox Christian videos to teach us about Christ and His Church. Almost all of us have time to watch or read them, every day.

And the people in the world around us have these opportunities, too – not to witness all the miracles of Christ, but to read and listen to thousands of things that point the way to Christ.

But what do we so often do?

Just like the Apostle Thomas, we state our conditions, and our preferences.

I will read – when I have time.

I will read – something that is better suited to me.

I will pray – something that is not too long, or too boring.

Before Thomas arrived at that upper room, the Lord said to His disciples, “As my Father sent me, so I send you,”. Saint Cyril of Alexandria says, this is our mission: to follow the will of God the Father, just like the Son did.

Not our own will. Not on our own conditions. Not our own preferences.

Of course, this is the exact opposite of what the world will teach us, and it is going to take tremendous work if we are going to think differently.

God has given us so much – even now, in the midst of a crisis with our churches closed.

What are we going to do with it?

The good news for the Apostle Thomas was this: he was looking for the Lord. He was seeking the Lord – and the Lord showed Himself to Saint Thomas.

The same is true for us:

The Lord will always respond to our efforts to find Him, and to know Him. He will give in response to us much more than our little efforts toward Him.

But He will not force us.

Like the Apostles, He has already surrounded us with the miracles of His grace.

He has already brought heaven down to earth.

Now, we must raise our eyes to meet Him.