The Gospel and the Trojan Horse

Source: Mysterion: the Meeting of Now and Ever
Priest Richard Rene | 06 October 2015 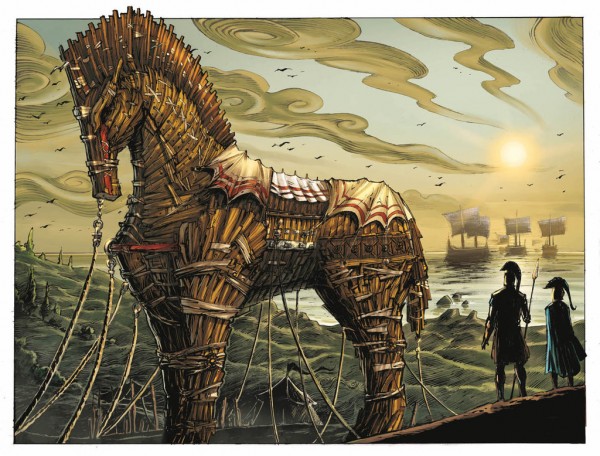 A typical newcomer to the Eastern Orthodox Church cannot help but come to the conclusion that Orthodoxy is a culture with a vengeance.

Participating in the Orthodox way of life inevitably means adopting the very specific and conspicuous set of beliefs and practices that characterize this community. In the first place, becoming Orthodox means embracing the whole ‘gesture, motion and display’ of incensing, icon veneration, vestments, chanting, processions, bowing and crossing oneself. Outside of the liturgy, Orthodox Christians are expected to fast from all animal products at regular intervals, attend special services during the week, and practice a daily and prescribed rule of prayer.

In the majority of Orthodox Christian communities, the cultural expectations are additionally bound up with ethnicity—to be Orthodox means to be Greek or Russian or Romanian or some other culture where Orthodoxy is a ‘native’ religion. In many Orthodox churches—especially those where new converts or old world ideals predominate—the culture of Orthodoxy may may even extend itself into clothing and personal appearance: beards on men, headscarves on women during the liturgy are two of the most prominent examples.

While the Orthodox Church does not insist that all of the above practices are equally essential to one’s salvation, there is a sense that the culture of Orthodoxy—those conspicuous practices that can seem so strange upon first encounter—is integral to the fullest possible experience of God in the person of Jesus Christ. Indeed, the Orthodox Church would insist that its particular form of ‘gesture, motion and display’ is precisely what makes its understanding of Christianity fuller than those of other Christian communities. Many Orthodox Christians would take St. Vincent of Lerins’ words—’the rule of faith is the rule of prayer’—as a basic axiom. The form of our prayer is absolutely inseparable from what we believe—the essence of our faith.

Only in the past half century has this assumption been tested as never before. With the flowering of historical scholarship in the West around the culture of Eastern Orthodoxy—the origins of its beliefs and practices—Orthodox believers have come face to face with an uncomfortable truth: that our culture has evolved over the centuries. Liturgy, icons, vestments, even rules of fasting and prayer have all developed and changed to the point that they bear little resemblance—at least superficially—to the practices of the first century Christians.

Added to this, Orthodox adherents must now contend with a postmodern sensibility that insistently asks us how we can claim to be the ‘One True Faith’ when our Church culture evolved within very specific contexts. How can we declare that we represent the ‘one true Church,’ when we are evidently just one of many spiritual cultures?

While we may argue these challenges, we cannot merely dismiss them outright. They do, after all, raise at least one important question: if our ‘rule of prayer’ is indeed inseperable from our ‘rule of faith’—Jesus Christ—how do we reconcile the dynamic, changing nature of the former with the latter who is the same yesterday and today and forever (Heb. 13:8)? What is the relationship between the historical, specific, formal dimensions of Orthodoxy and its eternal, unchanging essence whose ultimate purpose is to fill all in all (Eph. 1:23)?

To answer, let us consider the image of the seige of Troy. The Greeks, led by Menalaos in pursuit of his abducted wife Helen, spent ten years trying to conquer the Trojan city, but were unable to breach its walls. Finally, the attackers built a wooden horse inside of which they concealed a force of men. They then pretended to sail away in defeat and the Trojans pulled the horse into their city as a trophy of their victory. When night fell, the Greeks emerged from the horse and opened the gates to the rest of the army, which had sailed back under cover of darkness. They invaded and destroyed the city, bringing the decade-long war to an end.

The image of Troy and the Trojan horse offers us an image with which we can grapple with the relationship between faith and Church culture. Before the Incarnation, God was also conducting a kind of siege whose gateway was the human heart. He could not actually break in, however, until He appeared in a form that we could recognize as our own: within the framework of family and tribe, language and religion, subject to history, change and growth, and death. As the Greeks concealed themselves in the horse that they might conquer Troy and rescue Helen, so too God concealed Himself in a first century Jewish male who spoke Aramaic and never ventured beyond the boundaries of Roman-occupied Palestine—so that He might conquer the powers of this world and rescue His beloved creation, abducted and imprisoned in sin and death.

In his Dogmatic Treatises, Gregory of Nyssa makes the same argument by comparing God to a fisherman trying to ‘catch’ His creation:

“In order to secure that the ransom in our behalf might be easily accepted by him who required it, the Deity was hidden under the veil of our nature, that so, as with ravenous fish, the hook of the Deity might be gulped down along with the bait of flesh, and thus, life being introduced into the house of death, and light shining in darkness, that which is diametrically opposed to light and life might vanish.”

This divine strategem was not limited merely to the span of Jesus’ thirty or so years in first century Palestine. Through the Holy Spirit, His Body continues to live in history and invade every successive age with divinity by the same means as He did in the period of His Incarnation. Just as He entered our world concealed in the ‘Trojan horse’ of Jesus’ humanity—with all of its specific cultural and historical characteristics of Judaism in late antiquity—so too He now continues to breach our defenses through the Church’s conspicuous culture, which is the flesh of His humanity, His Incarnation continuing in various ages and nations of the earth.

Thus the Church continues to exist in a cultural form, precisely because God ultimately reveals Himself as an enculturated human being. And just as this cultural being subjected Himself to the cultural processes of change—being born, growing in wisdom, dying—while never ceasing to be the same eternal Jesus—so too does the Church’s way of life undergo the developments that scholars have recognized, while never relinquishing its essential identity as the Body that bears to us the God who is ever-existing and eternally the same.

When the Church attempts to reinvent itself continually as ‘contemporary’ and ‘relevant,’ it also deprives itself of those historical and cultural traits and habits that make it quintessentially human. As such, it divests itself of the power to proclaim the God who is incarnate in history and culture. A Church so impoverished may testify to a Jesus who is fully divine, but cannot introduce a fully human Jesus into the world. As a result, the Trojan horse remains locked outside the gates of our life, the divinity it bears forever alien to our experience.

On the same basis, we who have embraced the Orthodox way cannot be content with merely allowing the Trojan horse to enter. We cannot allow ourselves to become fixated on this gift as an end in itself, a religious monument to be preserved. We must remember continually that our Church culture is indeed a Trojan horse of humanity within which the divine invasion of our present moment is concealed. While our ‘rule of prayer’ may be inseperable from our ‘rule of faith,’ the two should never be confused, any more than Christ’s two natures, which exist ‘without separation, without division,’ but also ‘without confusion’ and ‘without change.’

Unlike the citizens of Troy, therefore, we have a choice. We can keep our Trojan horse locked, stifling its invasive and transformative power in the present moment, or we can discern within its beautiful form the even more beautiful form of our Beloved Invader. For only when we see so clearly can we cry out with the poet John Donne: “That I may rise, and stand, o’erthrow me, and bend Your force, to break, blow, burn, and make me new.” 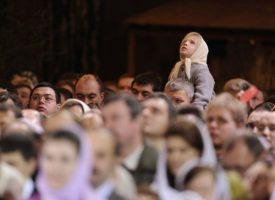 Ethnicity Does Not Come Before the…
Archpriest Gabriel Rochelle

So this man pulls up to church just as I did the other day. He got…