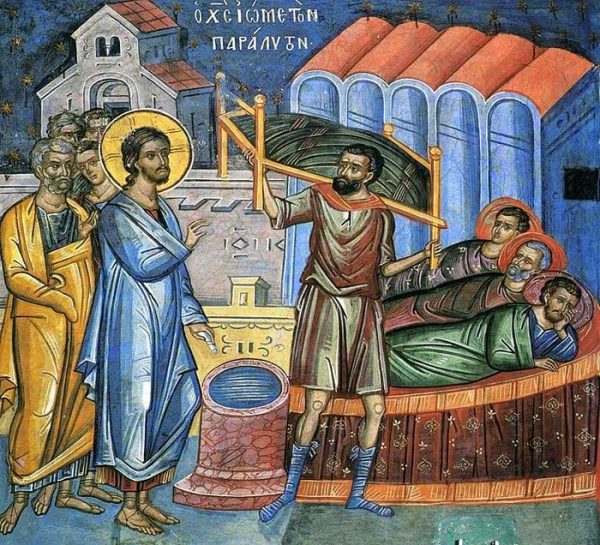 A notable archaeological site in the old city of Jerusalem is the pool of Bethesda. Pilgrims and tourists visit the excavated remains of the pool, which are located next to the Church of St. Anne in the Muslim quarter. It was at this pool that Jesus long ago healed the paralytic of today’s Gospel reading (John 5:1-15).

This paralytic had suffered thirty-eight years. Who knows how many times he tried to be the first to enter into the pool for a cure. The water in the pool gurgled now and then as pressure built up from below, just as it happens today in many places in the world. A local tradition had grown that the water carried healing powers.

The Gospel tells us of a host of sick people, “invalids, blind, lame, paralyzed” (John 5:3), who gathered at the pool, each hoping to be healed. It was believed that after the bubbling of the water, whoever could rush first into the pool would be cured. (Many years later a well-meaning copier of manuscripts added the explanation that it was an angel of God who from time to time stirred the water, an addition which is not part of the text original to the Gospel of St. John).

People were healed at Bethesda. Their numbers and their persistence at the pool could not otherwise be explained. They were healed by reason of their faith that God’s power worked the miracle, and not by reason that the natural bubbling of the water itself had curative power. This interpretation helps us to appreciate the power of faith working, even when clear knowledge is inadequate, and also to empathize with the local people’s mis-construal of a natural phenomenon.

Most importantly the above interpretation eliminates an otherwise exceedingly disturbing implication, namely that a caring Creator by His own will could design such a tragic contest between people with physical challenges. It is not possible that a loving Father as taught to us by Christ could, by His own initiative and purpose, be the cause of a pathetic struggle between sick people shoving, fighting, and perhaps even cursing one another, as they desperately tried to be the first to enter the water for a healing. Such an idea is unthinkable and wholly unworthy of the nature of a loving and caring God.

Because of human weakness, ignorance and free will, many cruel and tragic things happen in the world. God allows them to happen as severe tests of faith and moral endurance, and with the hope that humanity is chastened by them. But in no way does God cause such events by His own will, purpose and initiative.

Bethesda means “house of mercy.” And it was a place and a day of mercy for the paralytic as Jesus came into Jerusalem. Jesus did not just glance at the host of ailing people and move on quickly, but He stopped and took time to converse and connect with a specific person. It is a striking example of an expression of love and of human solidarity to treat people with kindness, and to relate to them as human beings without fear or hesitation, no matter the circumstances and conditions. Mercy in the Bible connotes loving kindness, a most effectual gift of bonding with each other, especially those with physical challenges.

St. John Chrysostom asks: why did Jesus come to this particular man to talk with him and heal him? The answer? Perseverance. He came to this man, blessed him, and healed him for his persistence at Bethesda all those years, struggling and hoping for a cure, without result until Christ had come. St. John praises the astonishing persistence of the man and he admonishes Christians not to give up easily but to be zealous in their own prayers and struggles in the life of faith.

Jesus asked the paralytic: “Do you want to be healed?” The man did not answer with a strong yes. But he had not lost hope either. Although he wanted to be healed, he had nobody to help him. Others always went before him into the pool. Apparently no relative or friend was there to help the man at the right time. In our hymns and prayers we call Christ “the Hope of the hopeless and the Helper of the helpless.” The Lord proved to be the hope and the help of this lonely man. He said, “Rise, take up your pallet, and walk!” At once the man stood up, now healed, and walked away able and whole.

In His ministry Jesus asked similar questions of others. He wanted to draw them out. He intended to stimulate their desire to seek the healing of body and soul. We know that when someone is sick, an important factor in getting well again is the desire. A positive will, a strong desire, a willingness to take responsibility for achieving a desired outcome are crucial in all areas of life.

So it is also with God and with us. God’s love always seeks to bring us the light of grace and truth, the gifts of forgiveness and healing, through nature, the Scriptures, the Church, other people and through particular events in our lives. God always is the pursuing lover who wants to rescue us from humdrum existence, to bring us closer to Him, to transform us from within, and to raise us up to spiritually confident and productively active lives.

However, nothing can happen unless we respond, unless our souls stir within with faith and strive after God’s gifts and blessings. Jesus always probed below the surface to find faith, to stimulate desire, to actualize a positive response. He asked: “Do you want to be healed?” “Do you believe that I am able to heal you?” “Seek and you shall find!” “Knock and it will be opened to you!” “Those who have ears to hear, let them hear!”

Albert Einstein once said that there are two categories of people. Some people are so engrossed in the routine of daily life that they see no spark of miracle anywhere. Others are discerning and alert to see miracles all around them. God is a mystery. Creation is a mystery. Life is a mystery. We do not demand miracles. Faith helps us to see them. Faith prays and hopes for special miracles, leaving the results to the wisdom and timing of God.