Because many people think that Christ's Church somehow "died out," or, as even many Protestants believe, that it apostasized during the first century after Christ (as if such a thing were really possible considering Christ's promise to be with His Church "even unto the end of the ages" (Matt. 25:20), I would like to share with you a glimpse of the early Church as seen in the lives and writings of Holy Fathers, from the time of the Apostles until about 200 A.D. roughly three generations.
Hieroschemamonk Ambrose (formerly Fr. Alexey) Young | 22 August 2008

My Dear Friend:
You have asked a good question: “Who are these Holy Fathers you Orthodox Christians are always speaking of, and why are they so important to you? Isn’t is enough to just have the Bible?” 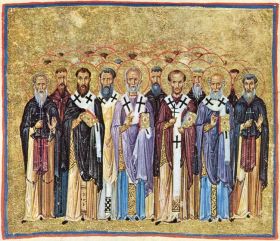 First I must tell you that not only are Holy Fathers important to Orthodox Christians today, but they have been important to Christians from the very beginning; during the great age of Church Councils (the fourth through the eighth centuries) the proclamation of those Councils began with these significant words: “Following the Holy Fathers…” I think you’ll find that these Holy Fathers are important to you, too, even though you are not Orthodox, because anyone who loves Christ naturally also loves those who knew and experienced Him intimately, revealing Him to others.

And so, a Holy Father is, first, a member of the Orthodox Church and a saint–that is, a baptized believer, known for the holiness and great virtue of his life, who is now in heaven with Christ. Secondly, a Holy Father is one who teaches the Faith and is an explainer of Holy Scripture. He gives witness to it by both his life and writings, enlightened by the grace of the Holy Spirit. Also, a Holy Father is not self-appointed; he is chosen by God and revealed to the consciousness of the whole Body of Christ as one who has spoken truthfully about divine things. Finally, his words must reflect the teachings of Holy Scripture and the Apostles; he may not teach things contrary to what has always been believed and taught in the Church; he must faithfully hand down what he has received.

Because many people think that Christ’s Church somehow “died out,” or, as even many Protestants believe, that it apostasized during the first century after Christ (as if such a thing were really possible considering Christ’s promise to be with His Church “even unto the end of the ages” (Matt. 25:20), I would like to share with you a glimpse of the early Church as seen in the lives and writings of Holy Fathers, from the time of the Apostles until about 200 A.D. roughly three generations.

You can easily verify that what you are about to read is not something I’ve made up; this information can be found in well documented form in any larger library. In fact, I ask you not to take my word for it. Investigate for yourself; take the trouble to be informed about something that affects your very salvation.

In his Epistle to the Philippians, St. Paul mentions a “true yoke-fellow” and “fellow-laborer” named “Clement” (Phil.4:3). You might be surprised to learn that history also knows this man; one of his letters is preserved in manuscript form in the British Museum! He is know as St. Clement the Roman. He was martyred in 97 or 98, shortly after the end of Emperor Domitian’s persecution of the Christian Church. His letter is a wonderful witness concerning the existence of Apostolic Succession in the early Church:
“The Apostles received the Gospel for us from the Lord Jesus Christ; Jesus Christ was sent forth from God. So then Christ is from God and the Apostles are from Christ. Both therefore came of the will of God in an appointed order. Having therefore received a charge…they went forth with the glad tidings …. Then, preaching everywhere in country and town, they appointed their first-fruits, when they had proved them by the Spirit, to be bishops and deacons unto all those that should believe …. They appointed these persons and then also provided a continuance, that when these should fall asleep, other approved men should succeed to their ministration.”
Concerning the need to be obedient to the successors to the Apostles he says: “But if certain persons should be disobedient unto the words spoken by Him through us, let them understand that they will entangle themselves in no small transgression and danger.”

Finally I mention St. Irenaeus of Lyons, who died in 202 A.D. He had been a disciple of St. Polycarp, who in turn was a disciple of the Apostle John. You can see here the living continuity of the Faith. In his last years St. Polycarp was the sole survivor of the Apostolic Age, the last man still living who had personally known the Apostles. For this reason he was treated with great respect and veneration and “numerous disciples gathered around him to hear from his lips the last living echo of Apostolic teaching,” as we learn from his life.

The three generations of early Holy Fathers, which I’ve briefly outlined for you, brings us to the dawn of the third century, having covered roughly the first 170 years of the Church’s life, from the Ascension of Christ in 33 A.D. to the death of lrenaeus in 202. You can see that each of these Fathers was acutely aware of his living connection with the Apostles and the Teaching he had received from them.

It is my prayer that you will one day be enlightened by the Light of Christ and come to a fuller understanding of these things.
Sincerely, in Christ,
Fr. Alexey Young

The Saints Constantine and Helen Greek Orthodox Church in Webster, MA is…