The Inconvenient Testimony of the Myrrhbearing Women

Having women as witnesses of the Resurrection was such a monstrously losing PR movethat there can be only one explanation: they indeed saw the Risen Lord first. If the Apostles had begun to come up with colorful details to give credibility to their proclamation, they would have never, not for anything, nor under any circumstances have made women the first witnesses of the Resurrection.
Sergey Khudiev | 29 April 2012

In our age, the Church is often accused of the disparagement of women. Orthodox people point to the Myrrhbearing Women as one example (the other being the Mother of God) of how highly the Church regards women – so highly, that it was namely women who were the first to meet the Resurrected Lord, and it was namely they who became the first bearers of the good news while the disciples were still showing skepticism and disbelief. 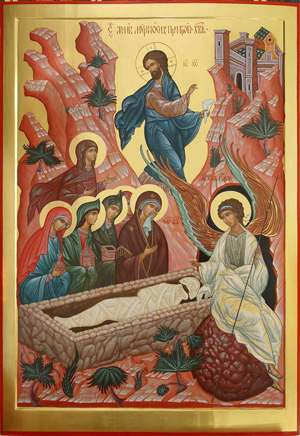 Let us recall the account from the Gospel: And, behold, two of them went that same day to a village called Emmaus, which was from Jerusalem about threescore furlongs. And they talked together of all these things which had happened. And it came to pass, that, while they communed together and reasoned, Jesus Himself drew near, and went with them. But their eyes were holden that they should not know Him. And He said unto them, What manner of communications are these that ye have one to another, as ye walk, and are sad? And the one of them, whose name was Cleopas, answering said unto Him, Art Thou only a stranger in Jerusalem, and hast not known the things which are come to pass there in these days? And He said unto them, What things? And they said unto Him, Concerning Jesus of Nazareth, which was a prophet mighty in deed and word before God and all the people: And how the chief priests and our rulers delivered Him to be condemned to death, and have crucified Him. But we trusted that it had been He which should have redeemed Israel: and beside all this, to day is the third day since these things were done. Yea, and certain women also of our company made us astonished, which were early at the sepulchre; And they found not His body, they came, saying, that they had also seen a vision of angels, which said that He was alive. And certain of them which were with us went to the sepulchre, and found it even so as the women had said: but Him they saw not. Then He said unto them, O fools, and slow of heart to believe all that the prophets have spoken (Luke 24:13-25).

The male disciples are openly of little faith: fools, and slow of heart. They were anything but filled with enthusiasm – on the contrary, they were deeply dejected and disappointed: “but we had thought that…” All this time, it was the women who were showing unwavering faith. It was they who were the “Apostles to the Apostles”; it was from them that the Apostles learned of the Resurrection. However, instead of responding with a joyful “Truly He is Risen!” the men simply did not believe: And their words seemed to them as idle tales, and they believed them not (Luke 24:11). This is an astonishingly anti-male text. One can only assume that militant feminists had a hand in writing it.

However, no such thing can be suggested, for fairly obvious reasons. The text, as has been verified by scholars, was written in the first century, and definitely not in the twenty-first century AD. In the first century AD there were no militant (or any other kinds of) feminists. It would not have even occurred to opponents to reproach the Church for being too patriarchal and for belittling the feminine. The ancient world was so rigidly patriarchal, so anti-feminine, that it is hard for us even to imagine. Pious Jews prayed daily with the words: “I thank Thee, O God, that Thou hast not created me a woman” – although, compared to the pagans, such an attitude still looked quite benevolent. Nonetheless, in the Old Testament, Eve is called a “helper,” “a help meet for him,” and “the mother of all living.” Many Biblical texts glorify pious women: housekeepers, mothers, wives, and even warriors and prophetesses. In Greek mythology the first woman was not Eve, but Pandora – the very same from whom the expression “Pandora’s box” entered every European language. Grievances have even been preserved from Greeks dissatisfied with their inability to have sons without the help of women: it would have been much easier to bring an offering to the temple and then pick up the child in the morning – but no, one has to deal with women.

In our days people can dream about a harmonious era of the “great goddess,” when people worshipped female deities, the status of women was high, and tempers were gentle and peaceful. There is no point at scoffing at such dreams: they reflect, however crookedly, a longing for paradise lost. But they have no connection to historical reality. The Athenians worshiped a goddess and lived in the most democratic society of the time – but at the same time, as the French historian Andre Bonnard writes: “The slave was not, however, the only human creature who had no part in Athenian democracy. Side by side with him, and despised almost as much, was woman” (Greek Civilization, [vol. 1, p. 126]).

In our days, we can point to the extremely high honor they were granted as something of which we moderns can likely approve; after all, we live in a civilization that has been formed for nearly two millennia by Christianity. But in those days, when the preaching of the Apostles was first being heard, when the Holy Apostle and Evangelist Luke was writing his Gospel, the fact that it was women who first saw the Resurrected Lord was extremely uncomfortable, even indecent. The pagans missed no opportunity to mock this. Celsus, one of the first anti-Christian polemicists, writes: “That while alive he was of no assistance to himself, but that when dead he rose again, and exhibited the marks of his punishment, and showed how his hands were pierced with nails: who beheld this? A half-frantic woman, as you state, and some one else, of those who were engaged in the same system of delusion.” Having women as witnesses of the Resurrection was such a monstrously losing PR move that there can be only one explanation: they indeed saw the Risen Lord first. If the Apostles had begun to come up with colorful details to give credibility to their proclamation, they would never, not for anything, nor under any circumstances have made women the first witnesses of the Resurrection.

This is an extraordinary testimony to the authenticity of the Gospel. As Bishop N. T. Wright, a prominent Biblical scholar, puts it: “Whether we like it or not, women were not regarded as credible witnesses in the ancient world. When the tradition had time to sort itself out and acquire the fixed form we already find in Paul’s quotation of it in 1 Corinthians 15, the women were quietly dropped; they were apologetically embarrassing. But there they are in all four gospel stories, front and center, the first witnesses, the first apostles. Nobody would have made them up. Had the tradition started in the male-only form we find in 1 Corinthians 15, it would never have developed, in such different ways as well, into the female-first stories we find in the gospels” (Surprised by Hope [p.55]).

If we give some thought to the historical context of the events of the Gospel, we can see just how precious is the Myrrhbearing Women’s testimony, a testimony given in a world in which no one wanted to treat the testimony of women seriously.

Most viewed articles
Five Signs of a Modern Pharisee208
ROC Holy Synod Discusses the Announcement of the Patriarchate of Alexandria Concerning the Establishment of the ROC Patriarchal Exarchate of Africa160
Bad Habits And Their Cure111
Medical Workers Walk 1.5 Km Through Snowdrifts and Save the Life of a 100-Year-Old Woman107
Grains of Wisdom and Piety Book Published87
Trial of Politician Defending Traditional Marriage Begins in Finland83
150th anniversary of the establishment of the North American diocesan see in San Francisco51
Time for a Course Adjustment?39
Church from time of St. Stephen the Great becomes monastery19
Most popular authors
Pravmir.com team488
Archimandrite Markell (Pavuk)208
Saint Nicodemus the Hagiorite111
Fr. Stephen Powley39
Ștefana Totorcea19