Why Were the Myrrh-Bearing Women the First to Learn the News of Christ’s Resurrection? 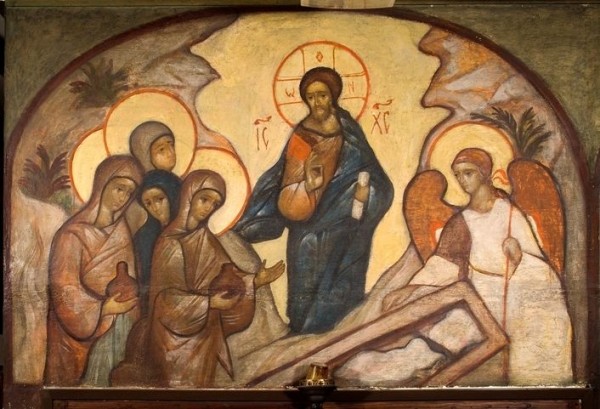 43 Joseph of Arimathea, a prominent member of the Council, who was himself waiting for the kingdom of God, went boldly to Pilate and asked for Jesus’ body. 44 Pilate was surprised to hear that he was already dead. Summoning the centurion, he asked him if Jesus had already died. 45 When he learned from the centurion that it was so, he gave the body to Joseph. 46 So Joseph bought some linen cloth, took down the body, wrapped it in the linen, and placed it in a tomb cut out of rock. Then he rolled a stone against the entrance of the tomb. 47 Mary Magdalene and Mary the mother of Joseph saw where he was laid.

When the Sabbath was over, Mary Magdalene, Mary the mother of James, and Salome bought spices so that they might go to anoint Jesus’ body. 2 Very early on the first day of the week, just after sunrise, they were on their way to the tomb 3 and they asked each other, “Who will roll the stone away from the entrance of the tomb?”

6 “Don’t be alarmed,” he said. “You are looking for Jesus the Nazarene, who was crucified. He has risen! He is not here. See the place where they laid him. 7 But go, tell his disciples and Peter, ‘He is going ahead of you into Galilee. There you will see him, just as he told you.’”

8 Trembling and bewildered, the women went out and fled from the tomb. They said nothing to anyone, because they were afraid.

Today’s Gospel reading is dedicated to the Myrrh-Bearing Women; to the simple women, who on the day following the burial of Christ the Saviour early in the morning hastened to His tomb to anoint the lifeless body of their Teacher with sweet spices.

On the whole, the Gospels focus very little on women. Partially this is due to the fact that women were considered to occupy a socially inferior position.  However, here we see the wonderful nature of femininity as such laid bare.  In one place only does the evangelist casually mention that, following Christ and His disciples, there were women who ministered to them (Mk. 15:41).  The words “ministered to them” represent to us the sincere sacrificial ministry of women which constitutes the very essence of the female nature.  It is remarkable that in God’s eyes women are first considered worthy of receiving the Angel’s testimony of the resurrection of their beloved Teacher.  It is not the disciples who, it would seem, had the right to be the first to learn of such a sublime occasion, but simple women.  Those who were kept in the background turn out to be worthy of the Angel’s blessed news.

Why are the Myrrh-Bearing women the first to be honoured with such news?  The thing is that feminine nature itself presupposes that love and sacrifice are its main quality and its fundamental value.  Any woman is by her very nature a mother, whether she is married or not.

And a mother is someone who can and ought to take to her heart every single person who is next to her regardless of their gender or age, whether they be virtuous or sinful. And this feminine love with a disregard for deliberations and perplexities triumphs over the despondency and depression that took hold of the disciples and drives the women to act without deliberating.

Unlike the disciples who, following Christ’s death upon the cross, went home depressed, despondent, and perplexed as to how they would go on living, the women simply act.  They take spices.  And as soon as the sun rises they run to the tomb of the Saviour, and – a miracle! They see that the tomb is empty; an Angel meets them and announces to them the joyous news of Christ’s resurrection. 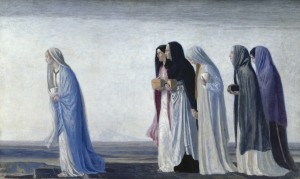