Numerous writers have mentioned the physical aspects of the prayer, the breathing exercises, the attention which is paid to the beating of the heart and a number of other minor features. The Philokalia is full of detailed instructions about the prayer of the heart, even with references to the Sufi technique. Ancient and modern Fathers have dealt with the subject, always coming to the same conclusion: never to attempt the physical exercises without strict guidance by a spiritual father.
Metropolitan Anthony of Sourozh | 04 August 2009 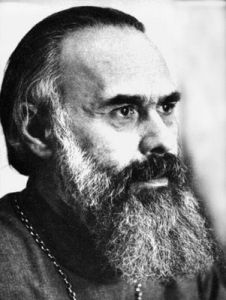 Those who have read The way of a Pilgrim are familiar with the expression ‘The Jesus Prayer’. It refers to a short prayer the words of which are: ‘Lord Jesus Christ, Son of God, have mercy on me, a sinner,’ constantly repeated. The Way of a Pilgrim is the story of a man who wanted to learn to pray constantly (1Thes 5:I7). As the man whose experience is being related is a pilgrim, a great many of his psychological characteristics, and the way in which he learned and applied the prayer, were conditioned by the fact that he lived in a certain way, which makes the book less universally applicable than it could be; and yet it is the best possible introduction to this prayer, which is one of the greatest treasures of the Orthodox Church.

All the messages of the gospel, and more than the messages, the reality of the gospel, is contained in the name, in the Person of Jesus. If you take the first half of the prayer you will see how it expresses our faith in the Lord: ‘Lord Jesus Christ, Son of God.’ At the heart we find the name of Jesus; it is the name before whom every knee shall bow (Is 45:3), and when we pronounce it we affirm the historical event of the incarnation. We affirm that God, the Word of God, co-eternal with the father, became man, and that the fullness of the Godhead dwelt in our midst (Col 2:9) bodily in his Person.

To see in the man of Galilee, in the prophet of Israel, the incarnate Word of God, God become man, we must be guided by the spirit, because it is the spirit of God who reveals to us both the incarnation and the lordship of Christ. We call him Christ, and we affirm thereby that in him were fulfilled the prophecies of the Old Testament. To affirm that Jesus is the Christ implies that the whole history of the Old Testament is ours, that we accept it as the truth of God. We call him Son of God, because we know that the Messiah expected by the Jews, the man who was called ‘Son of David’ by Bartimaeus, is the incarnate Son of God. These words sum up all we know, all we believe about Jesus Christ, from the Old Testament to the New, and from the experience of the Church through the ages. In these few words we make a complete and perfect profession of faith.

But it is not enough to make this profession of faith; it is not enough to believe. The devils also believe and tremble (James 2:I9). Faith is not sufficient to work salvation, it must lead to the right relationship with God; and so, having professed, in its integrity, sharply and clearly, our faith in the Lordship and in the Person, in the historicity and in the divinity of Christ, we put ourselves face to face with Him, in the right state of mind: ‘Have mercy on me, a sinner’.

These words ‘have mercy’ are used in all the Christian Churches and, in Orthodoxy, they are the response of the people to all the petitions suggested by the priest. Our modern translation ‘have mercy’ is a limited and insufficient one. The Greek word which we find in the gospel and in the early liturgies is eleison. Eleison is of the same root as elaion, which means olive tree and the oil from it. If we look up the Old and New Testament in search of the passages connected with this basic idea, we will find it described in a variety of parables and events which allow us to form a complete idea of the meaning of the word. We find the image of the olive tree in Genesis. After the flood Noah sends birds, one after the other, to find out whether there is any dry land or not, and one of them, a dove – and it is significant that it is a dove – brings back a small twig of olive. This twig conveys to Noah and to all with him in the ark the news that the wrath of God has ceased, that God is now offering man a fresh opportunity. All those who are in the ark will be able to settle again on firm ground and make an attempt to live, and never more perhaps, if they can help it, undergo the wrath of God.

In the New Testament, in the parable of the good Samaritan, olive oil is poured to soothe and to heal. In the anointing of kings and priests in the Old Testament, it is again oil that is poured on the head as an image of the grace of God that comes down and flows on them (Ps I33:2) giving them new power to fulfil what is beyond human capabilities. The king is to stand on the threshold, between the will of men and the will of God, and he is called to lead his people to the fulfilment of God’s will; the priest also stands on that threshold, to proclaim the will of God and to do even more: to act for God, to pronounce God’s decrees and to apply God’s decision.

The oil speaks first of all of the end of the wrath of God, of the peace which God offers to the people who have offended against him; further it speaks of God healing us in order that we should be able to live and become what we are called to be; and as he knows that we are not capable with our own strength of fulfilling either his will or the laws of our own created nature, he pours his grace abundantly on us (Rom 5:20). He gives us power to do what we could not otherwise do.

The words milost and pomiluy in Slavonic have the same root as those which express tenderness, endearing, and when we use the words eleison, ‘have mercy on us’, pomiluy, we are not just asking God to save us from His wrath – we are asking for love.

If we turn back to the words of the Jesus Prayer, ‘Lord Jesus Christ, Son of God, have mercy on me, a sinner’, we see that the first words express with exactness and integrity the gospel faith in Christ, the historical incarnation of the Word of God; and the end of the prayer expresses all the complex rich relationships of love that exist between God and his creatures.

The Jesus Prayer is known to innumerable Orthodox, either as a rule of prayer or in addition to it, as a form of devotion, a short focal point that can be used at any moment, whatever the situation.

Numerous writers have mentioned the physical aspects of the prayer, the breathing exercises, the attention which is paid to the beating of the heart and a number of other minor features. The Philokalia is full of detailed instructions about the prayer of the heart, even with references to the Sufi technique. Ancient and modern Fathers have dealt with the subject, always coming to the same conclusion: never to attempt the physical exercises without strict guidance by a spiritual father.

What is of general use, and God given, is the actual praying, the repetition of the words, without any physical endeavour – not even movements of the tongue – and which can be used systematically to achieve an inner transformation. More than any other prayer, the Jesus Prayer aims at bringing us to stand in God’s presence with no other thought but the miracle of our standing there and God with us, because in the use of the Jesus Prayer there is nothing and no one except God and us.

The use of the prayer is dual, it is an act of worship as is every prayer, and on the ascetical level, it is a focus that allows us to keep our attention still in the presence of God.

It is a very companionable prayer, a friendly one, always at hand and very individual in spite of its monotonous repetitions. Whether in joy or in sorrow, it is, when it has become habitual, a quickening of the soul, a response to any call of God. The words of St Symeon, the New Theologian, apply to all its possible effects on us: ‘Do not worry about what will come next, you will discover it when it comes’.

Most viewed articles
Critical Theory, Social Justice, and the Attempt to Disfigure the “Transfiguration”181
Patriarch Kirill Urges Believers to Fight New Idolatry in Their Own Lives125
The Frontier of Personhood119
Disoriented69
Bell-Ringing Unites Believers from Different Countries on the Day of the Baptism of Rus (+Video)57
Saint Macrina the Younger as a Model for our Lives1
Most popular authors
Pravmir.com team182
Eric Hyde181
Archpriest Stephen Freeman119
Fr. Stephen Powley69
Protopresbyter Fr. George Papavarnavas1