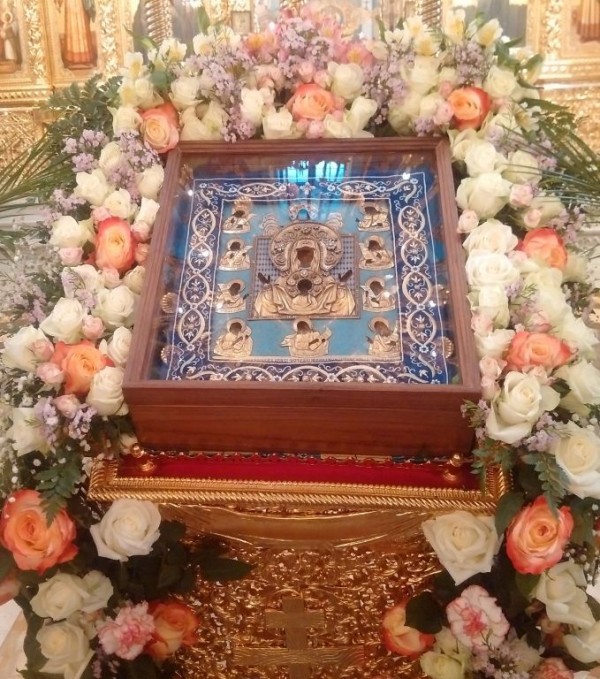 Greeting the delegation bringing the icon was His Eminence Metropolitan Nikon of Ufa and Sterlitamaksk and his clergymen. The icon was brought by a delegation from the Russian Orthodox Church Outside of Russia headed by His Grace Vicar Bishop Nicholas of Manhattan of the Eastern American Diocese. Accompanying him were: Mitred Protopriest Stefan Pavlenko, Rector of the Church of All Russian Saints in Burlingame, CA, of the Western American Diocese of ROCOR; Protopriest Vladimir Boikov, Rector of the Church of the Resurrection of Christ in Balmoral (Auckland) and Dean of New Zealand of the Diocese of Australia and New Zealand; Priest James Carles, Rector of St Panteleimon Church in Central Coast, Gosford, NSW, Australia, and Protodeacon Alexander Kichakoff of Holy Virgin Protection Cathedral in Chicago, IL, of the Diocese of Chicago and Mid-America.

The hierarchs then celebrated Divine Liturgy, followed by an akathist to the Kursk-Root Icon of the Mother of God.

Metropolitan Nikon then delivered a sermon during which he thanked His Holiness Patriarch Kirill of Moscow and All Russia and His Eminence Metropolitan Hilarion of Eastern America and New York, First Hierarch of the Russian Orthodox Church Outside of Russia, for granting their blessing for the icon to travel to Ufa and providing its people with the opportunity to pray before the great, world-renowned icon.

Vladyka Metropolitan emphasized the positive changes in Russia-having transformed from atheism to faith-which became possible due to the prayers and labors of the Russian diaspora; the emigration always prayed and continues to pray for its historic Homeland before the holy icons it preserved, especially before the Kursk-Root Icon of the Mother of God “of the Sign.”

In his response, Vladyka Nicholas expressed the overall joy felt by the Russian Church Abroad due to the fact that for the 7th year now, the main holy icon of the Russian diaspora is able to visit Russia. He noted that today the Mother of God Herself, through Her miracle-working icon, is with us all today; we should not seek out special miracles or signs, for She is present with us this day.