The Legacy of St Kosmas Aitolos 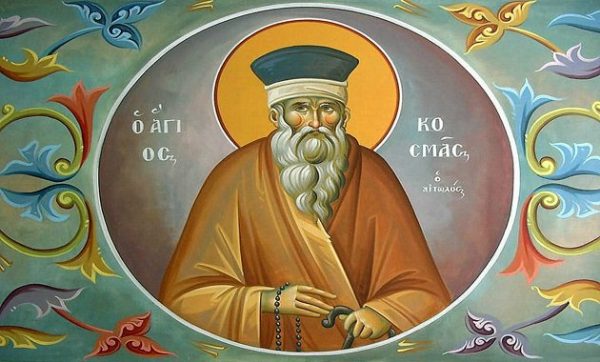 “If it were possible for me to climb up into the sky and shout with a great voice, to preach to the entire world that only our Christ is the Son and Word of God, true God and life of all, I would have done it.  But because I can’t do such a thing, I do this small thing of walking from village to village and teaching my brothers and sisters as I can, not as a teacher but as a brother.”

These words came from one of the great missionary saints of our Church, St. Kosmas of Aitolia, whose memory we celebrate on August 24th/ September 6. He is known as one of the greatest missionaries of our modern era as well as a founding father of the Greek nation. After spending 19 years as a monk on Mt. Athos, St. Kosmas decided to leave his monastery in order to preach the Gospel in villages throughout the then Ottoman Empire during the 18th century. For the last 20 years of his life, he traveled throughout the villages of northern Greece and Albania proclaiming the Good News of our Lord and helping people to discover the Kingdom of God.

St. Kosma came from a poor family, with no opportunity for education. Thus, he was illiterate until around 20 years old. Despite his illiteracy, he had a strong desire to learn to read and especially longed to read the Bible and writings of the Church Fathers. Thus, he traveled from village to village throughout his teenage years trying to find a school or a teacher from whom he could learn to read. Eventually, his travels led him to a school on Mt. Athos, the holy peninsula of Greece that houses numerous monasteries. After learning to read, and as he began studying the Holy Scriptures and Church Fathers, Kosma decided to become a monk at the Philotheou Monastery and imagined that he would spend the remainder of his life living in that monastery.

Little could he imagine that 19 years later he would hear God calling him to do something totally unexpected. He describes it in this way: “From studying the holy Gospel, I discovered many teachings which are pearls, diamonds, treasures, riches, joy – eternal life. Among these teachings I found Christ saying that no Christian can be concerned only with himself – how he can be saved – but must be concerned with those who don’t know Christ and who have never heard the Gospel.”

This revelation of God’s passionate love for the entire world transformed his own worldview. In fact, it made him see beyond himself and his own cares and led him to focus on the needs of the world outside.  Later he would say, “I looked out the window of my monastery and perceived the world wounded, bleeding, and crying for help. I saw people submerged by waves of ignorance, self-centeredness and hatred.  Thus I decided to not waste another moment.”

Compelled by this imperative call of God to “go forth” to all peoples, St. Kosmas did something quite unusual for the monks of his era. He decided to leave the monastery. He received the blessing of his elder, along with a blessing from the Patriarch on Constantinople, and began traveling from village to village preaching a very simple yet powerful message to the illiterate masses. This era of the 18th century was a critical time in the history of the Balkans. The vast majority of people were illiterate, the Church was greatly weakened, and especially in the regions of Albania many people were giving in to the pressures to convert to Islam. So Saint Kosma began proclaiming the Good News of our Lord, helping people to understand God and His commandments, and challenging them to commit their lives in a renewed way to Jesus Christ and His Church. He preached how Christians much love one another, including their enemies, forgive each other, and strive to live a holy life of peace joy, and humility.  His teachings were quite challenging.  He would remind people that true Christian love means, “If I have a loaf of bread to eat, and someone else does not have, I must not eat alone but share what I have. If I have clothes and another lacks them, I must give away part of what I have. If I open my mouth to gossip, at once I remember love and it deadens my mouth . . . And above all, I must forgive.” He even went on to say, “A man may insult me, kill my father, my mother, my brother, and then gouge out my eyes.  As a Christian, it is still my duty to forgive him.”

In many villages, the people responded well to St Kosmas and wanted him to stay with them.  His desire to share the gospel with all people, though, compelled him to continue traveling from village to village. “How can I stay in one village,” he would lament, “when there are thousands of villages where people have never heard the word of God.”  An extremely important thing that he would do before leaving each village, however, was to help the villagers organize a school, so that the village children could learn to read and then they could begin reading and understanding especially the Bible. In fact, one of the reasons why St. Kosmas is considered a founding father of modern Greece is precisely because he helped to start more than 200 elementary schools and 10 high schools throughout Greece.

Although Kosmas was loved by many people, his preaching obviously upset certain groups not interested in the spread of Christianity nor in the education of the masses. Thus, on August 24, 1779 St. Kosmas was seized in the city of Berat in Albania and hanged. (A little sidenote is during my years as a missionary in Albania, I was blessed to venerate and pray before his relics, which are now housed in the chapel of the Archdiocese in Albania.)

From this brief account of St. Kosma’s life, I want to lift up four lessons that we in our contemporary setting can learn from him and apply in our own lives. First, St. Kosmas believed it was extremely important for all believers to read and understand the Bible and writings of our Church Fathers. In fact, one piece of advice he would give in each village would be for the villagers to gather in groups of 10 or 15 and read the Bible together and then discuss what it said. Imagine, St. Kosmas was a proponent of Bibles study groups 250 years ago! We’re going to be starting up our own Church Bible Study groups next month, and St. Kosmas is reminding us of their importance.

Second, St. Kosmas realized that our faith is not parochial, but universal. Our faith does not simply serve ourselves, but is for all people. The Gospel teaches us to go forth and share the Good News with all people everywhere. We cannot be concerned only with ourselves, but as St. Kosmas reminds us, we must share God’s love with the world around us!

Third, St. Kosmas understood the need for education. Christianity is not an illiterate faith. We should all have a thirst to learn more about our faith, and never stop our learning! We have an endless treasure of spiritual riches, and thus, we all should continually read the Bible and other spiritual books, and strive to constantly learn and grow in our Orthodox Christian faith.

Finally, St. Kosmas believed that an authentic Christian life implies an ascetic struggle. We can’t just say we believe in God, but we must strive to live our lives according to His teachings. This implies concrete actions of love, forgiveness, mercy, compassion, generosity, caring for others, and following the basic teachings of Jesus Christ. To believe in Christ intellectually is one thing, to follow him practically is another!

As we celebrate the feastday of St. Kosmas Aitolos today, may each of us strive to follow his live-changing principles so that we can truly honor his legacy by living our lives in Christ, and radiating the light of Jesus on the world just as he did!

“Love your enemies, and pray for those who persecute you, that you may be children of your heavenly…

Do We Have a Desire to Change?

Christianity is a faith that meets people where they’re at. We welcome the believer and the one who…

One Thing Needful – Honoring and Imitating the Mother of God

“Martha, Martha, you are anxious and worried about many things but one thing is needful and Mary has…