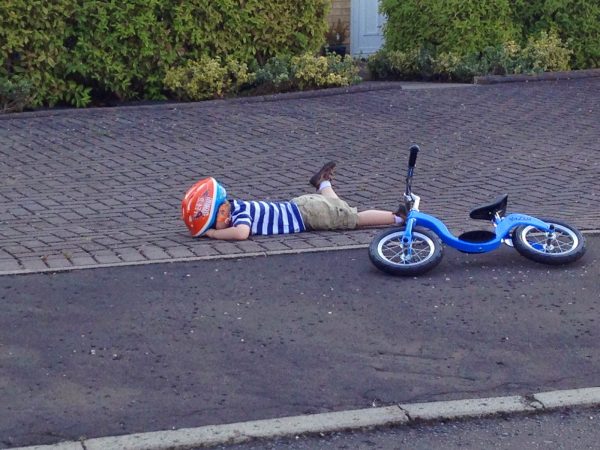 I have often used the example of riding a bicycle as an image of knowing God. There’s no difficulty learning how to ride if you don’t mind falling off for a while. But no matter how many years you have ridden, you cannot describe for someone else how you know what you know. But you know it. I also suspect that if you thought too much about riding a bicycle while you were riding it, you could mess up and wreck.

This, for me, is an example of knowing while not knowing. It’s very common. This form of knowledge is sometimes called “kinesthetic memory.” You know something, but not through discursive reasoning or self-conscious experience. I believe that the knowledge of God, our communion with Him, belongs to something similar. The Fathers describe the knowledge of God as “noetic” knowledge – something that works through the nous, rather than through discursive reasoning or the other experiences that make up our conscious psychology. If you ask, “What is the nous?” The fathers would say, “It’s that faculty by which you know God.”

But first, it is worth noting what it is not. The nous is not discursive reasoning. No amount of thinking will ever yield knowledge of God. That is a straightforward conclusion of the claim that the knowledge of God is “noetic.” Second, the knowledge of God is not a psychological experience, per se. I have stood on the edge of the Grand Canyon and felt that terrible vertigo in the bottom of my feet, and the overwhelming sense of its vast and dangerous depth. The knowledge of God is not like that, though it can indeed carry an element of overwhelming otherness. It is not the weepy excitement often associated with forms of ecstatic worship (Pentecostalism). I’ve been there. Done that. It’s not the same thing at all. It is not a “feeling,” nor even an intuition.

Fr. Thomas Hopko famously said, “You cannot know God – but you have to know Him to know that.” He clearly knew what he was talking about.

The Scriptures speak of knowledge as communion, a true participation in that which is known. The Scriptures are also familiar with discursive reasoning, the sort of factual knowledge that is quite common. St. Paul occasionally uses an intensified word for knowledge, epignosis.” Simple gnosis (the straightforward word for knowledge) would have been sufficient, but he instead employs this intensification. The knowledge that comes through communion is not a fact to be considered, rather, it is a knowledge that in the very act of knowing becomes part of you. The knower and the known share some manner of common existence.

The healing that is inherent in Christian salvation is not just found in what (Who) is known, but in the manner of knowing as well. The abstraction that we call “thinking,” etc., in the contemporary world is a diminishment of what it means to be human. We have learned to focus on a very narrow stream of information, and, in turn, have come to be possessed by the information on which we focus.

Communion is not a refined art to be mastered. It is always present and a factor in everything in our lives, though our culture largely ignores it. To use a sadly common example, anyone who has experienced exposure to pornography must admit that the images do not disappear when the computer is turned off. Studies have shown that such exposure (particularly among the young) makes profound changes in awareness itself. It becomes part of us. This reality is anticipated by St. Paul:

Knowledge is not entirely a choice, nor is seeing something to be turned off and on at will. Communion unites us to that which we see. It becomes part of us and we inescapably bear it within us. Sin is like a cosmic PTSD, an abiding and indwelling echo of that to which we have joined ourselves. St. Paul cries out, “Wretched man that I am! Who will deliver me from this body of death?” (Rom 7:24)

St. Paul also uses the term “heart” in describing the state of the nous (something that remains common in the Fathers):

…because, although they knew God, they did not glorify Him as God, nor were thankful, but became futile in their thoughts, and their foolish hearts were darkened. (Rom 1:21)

This “darkening” describes the effects of a communion with the dark things of the world. The passions (gluttony, lust, love of money, anger, dejection, despondency, vainglory, pride), and the distorted vision of creation that they produce, gain their power when we enter into communion with them. Our thoughts can never be “objective” in such a situation. Rather, we see the world through filters – those of various passions that have now become united to us.

The Path of Salvation

Within the writings of the Fathers, the life of salvation is described in three stages: purification, illumination and deification. These steps are not entirely sequential. Some measure of each of them is present in the whole of the Christian life (rightly lived). But their sequence abides: there is no deification without prior purification and illumination. Given the nature of our life in the world, it is almost always the case that purification forms the greater part of our struggle.

This process is referenced by St. Paul:

And do not be conformed to this world, but be transformed by the renewing of your nous, that you may prove what is that good and acceptable and perfect will of God. (Rom 12:2)

Note that St. Paul does not ground this renewal in some form of moral effort in which the will merely tries harder. The problem is within the nous, the heart. And it is that primary cognition of our human existence that must be transformed. It’s for this reason that I said earlier that the healing that is inherent in Christian salvation is not just found in what (Who) is known, but in the manner of knowing as well. It is the cleansing and renewing of the nous (heart) that is paramount in the life of salvation.

I will return to the image of learning to ride a bicycle. There is a two-fold element in that process, analogous to purification and illumination. Falling off and getting back on are the essential elements of purification. Fear and any number of passions could prevent this process from taking place. Falling off is not failure. Not getting back on would be failure. Our moral failures are almost beside the point. Repentance, the refusal to abandon the life of grace in Christ, is the one thing necessary. Illumination comes in time and with it comes a greater awareness and understanding of our failings.

It is vital that we make a beginning in this journey of inner renewal. We do not ignore what can be known through discursive reasoning, but we do not mistake it for saving knowledge. We recognize the reality of sentimentality in our lives but we do not raise it to the level of authentic spiritual experience. With prayer, repentance, and helpful guidance (there is no Christianity without some form of discipleship) we come to hear and know the Shepherd’s voice. We will fall down a lot. What matters is getting back up.