The Message of the Sacred Bishops’ Council to the clergy, monastics and all the faithful children of the Russian Orthodox Church

Source: DECR
Natalya Mihailova | 05 February 2016
The Bishops’ Council which took place in Moscow on February 2-3, 2016, addressed the clergy, monastics and all the faithful children of the Russian Orthodox Church. The text of the message is given below. 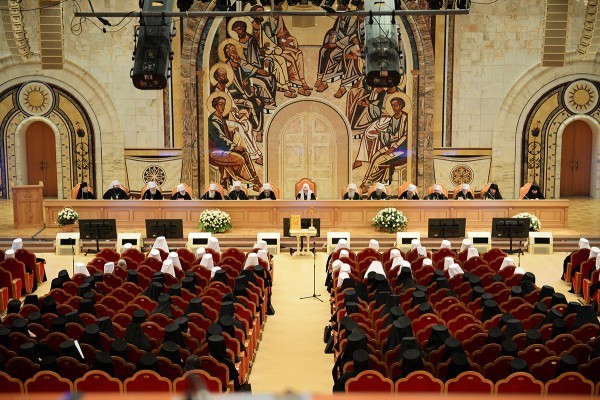 The Sacred Bishops’ Council which took place in the city of Moscow on February 2-3, 2016, sends to all of you the apostolic greeting – may grace, mercy, and peace, from God our Father and Jesus Christ our Lord(1 Tim 1:2) always be with you.

The Lord’s words, that all may be one (Jn 17:21), are of special relevance today when the world suffers ever more greatly from divisions. St Paul calls upon us, saying, Now I beseech you, brethren, by the name of our Lord Jesus Christ, that ye all speak the same thing, and that there be no divisions among you; but that ye be perfectly joined together in the same mind and in the same judgment (1 Cor 1:10). It is a duty of every Orthodox Christian, be it a bishop, a cleric, a monk, a nun, or a lay person, to strive to preserve the church unity.

This unity was manifested, among other things, by the Councils, from the first Apostolic Council of Jerusalem onwards. The following words, For it seemed good to the Holy Ghost, and to us, preceded the decisions of that first Council. Currently a Pan-Orthodox Council is being prepared. Taking part in it will be bishops of all universally recognized autocephalous Orthodox Churches. It is expected to open in Crete this year, on the Feast Day of the Holy Pentecost. The hierarchs who will represent the Russian Orthodox Church at the Pan-Orthodox Council will have to, in strict conformity with Christ’s truth and the undistorted patristic tradition that our Church has been preserving for over a thousand years, together with representatives of the other Local Orthodox Churches, respond to the questions facing the plenitude of Orthodoxy today. We ask for your zealous prayers so that the Lord might reveal His holy will to the participants in the forthcoming Holy and Great Council of the Orthodox Church and it might carry out its work to the glory of God and for the benefit of the ecumenical Orthodox family, strengthening its unity and preserving in purity our most holy faith (cf. Jude 1:20).

The inextricable link between the Heavenly and the earthly Churches was manifested by the canonization of Archbishop Seraphim (Sobolev, 1881-1950) of Boguchary, that took place at this Bishops’ Council. Archbishop Seraphim performed his ministry in Bulgaria where he ended his earthly pilgrimage. This saint set an example of righteous life and fervent and unfeigned love for his flock, and was glorified by God during his lifetime by blessed gifts and after his demise by miracle-working. In the following words, well-founded, strong and striking, he emphasized the necessity to zealously preserve the Orthodox faith: An important characteristic of the Church is immutability in her dogmatic and moral and canonical teaching which comes from God Himself, Our Lord Jesus Christ <…> It is this immutability of the teaching of the Orthodox Church which has preserved the apostolic faith in all its purity that distinguishes her from all other Christian confessions. It is by this awareness that the Russian Orthodox Church has been and always will be guided.

Rejoicing at seeing that the people of God have ever deeper veneration for saints pleasing unto God, the Sacred Council blessed the church-wide veneration of the synaxis of saints who had been locally venerated before, including the Passion-Bearer Yevgeny (Botkin), the doctor who had died together with the Royal Passion-Bearers. His church-wide veneration acquires special importance now when the Church seeks to find out the ultimate truth about the murder of the Royal Family.

These days a new stage has begun in examining the remains found in Yekaterinburg and allegedly belonging to the Royal Family. The Sacred Bishops’ Council insists on an unbiased and comprehensive scientific expertise, since for the Church the remains of passion-bearers are holy relics. The remains found in Yekaterinburg may be regarded as such only provided that any smallest doubt in their authenticity is dispelled.

The Russian Orthodox Church prays for the restoration of peace in the long-suffering Ukrainian land, since the armed confrontation is going on in the southeast of the country. At a time when churches are being seized and the children of the canonical Church are being persecuted, the Council calls upon her faithful to pray ever more zealously for the bishops, clergy, monastics and laypeople of the Ukrainian Orthodox Church.

The Church is deeply alarmed by the ongoing violence against the population of the Middle East and persecutions of Christians who are being tortured and driven out of their homes. Churches are being destroyed and shrines are being desecrated there. We are praying today for the peaceful settlement of the armed conflicts in the region.

The Orthodox Church has been always performing her salutary ministry, preaching Christ Crucified and Resurrected to those far and near. We all, archpastors, clergy, monastics and laypeople, are called to bear this witness in life and word. May the God of peace Who brought again from the dead our Lord Jesus, that great shepherd of the sheep, through the blood of the everlasting covenant, make us perfect in every good work to do His will, working in us that which is wellpleasing in His sight, through Jesus Christ (cf. Heb 13:20).