The Power of Memory: Chernobyl Thirty Years Later, a message from His All-Holiness 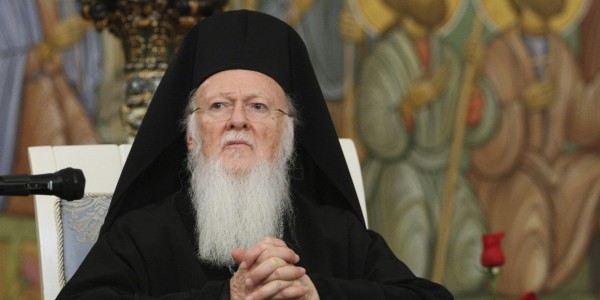 Thirty years ago, in the early morning of April 26, 1986, even as the Orthodox Church was about to embark on its holiest of weeks leading to the joy of Easter, the Chernobyl nuclear power plant in Ukraine exploded, creating the worst nuclear disaster that the world had seen up to that time.

The consequences of the disaster were felt far and wide: in the extension of contaminating radioactive particles into Russia, Belarus, as well as countries to the North and West; in human desertion and ecological destruction of vast surrounding areas; in long-lasting and permanent damage to health and loss of human life estimated at one million premature deaths.

With this painful background of experience and knowledge, what can we conclude as conscientious citizens? What can we resolve as committed believers? And what can we profess as responsible leaders?

First, we must never forget. We must forever remember. We must recall the names of all those, known and unknown, who lost their lives as a result of our actions, just as we must retain vivid in our heart and mind the tragic consequences of our failures. Memory is a powerful attribute in religion, and particularly in Christianity where it becomes a transformative force. It is the way in which we relate to the past, change our attitude and conduct in the present, and assume responsibility for the future.

Second, we have reached a point in technological development where we must learn to say “No!” to technologies with destructive side effects. We are in dire need of an ethic of technology. In the Orthodox Church, we profess and confess that God’s spirit is “everywhere present and fills all things” (From a Prayer to the Holy Spirit). However, we must also begin to embrace a worldview that declares and demonstrates the biblical conviction that “the earth is God’s and everything in it” (Psalm 23.1) so that we may refrain from harming the earth or destroying the life on it. We have been gifted with unique resources of a beautiful planet. However, these resources of underground carbon are not unlimited–whether they are the oil of the Arctic or the tar sands of Canada, whether they are the coal of Australia or the gas in Eastern Europe. Moreover, with regard to nuclear energy specifically, we cannot assess success or sustainability purely in terms of financial profit–the disasters at Three Mile Island (1979), Chernobyl (1986), and Fukushima (2011) have amply demonstrated the human, financial, and ecological cost. Nor, indeed, can we ignore the other problems of nuclear power, such as waste disposal and vulnerability to terrorist attacks.

Third, we have reached a point in our economic development where we must learn to say “Enough!” to the mentality of consumerism and the competition of market economy. It is time to be honest with ourselves and with God, acknowledging that the Christian gospel is not always really or readily compatible with the ways of the world; indeed, the message of Jesus Christ and the Church Fathers aims at restraining the crude passions of greed and avarice.

Finally, we have reached a point in our global civilization where we must learn to say “Yes!” to another reality beyond ourselves, to the Creator of all creation, before whom we should kneel in humility and surrender in prayer, recognizing that he and everything he created is for all, not just our own selfish desires. Perhaps the greatest lesson and recollection from Chernobyl is that we must share the world with all people. What we do in the world and for the world affects people’s lives–their health (with the inestimable number of cancer victims), their nourishment (with the inconceivable contamination of food), as well as future generations (whether with the insufferable birth defects and the indiscernible impact on our children). This is the lesson that, in the Church, we call communion. It is the foremost definition of “God as love” (1 John 4.8) and the highest expression of human love.

This new kind of thinking–this new ethic that aspires to “a new heaven and a new earth” (Rev. 21.1) –is what should be taught in every parish and every corner of the world. Chernobyl should be a lesson about restraint and sharing. We must show compassion; we must demonstrate respect; and we must make peace, not just with our neighbors, but also with the whole of creation.

As the Mother Church of Ukraine, we fervently pray that the memory of Chernobyl be eternal and not in vain.