The Priest as a Role Model

Source: OCA
To be a model for others requires an enormous amount of spiritual gifts to offset his glaring imperfections. And if he thinks of himself as a prototype for others, he’s already in trouble.
Archpriest Vladimir Berzonsky | 15 October 2015 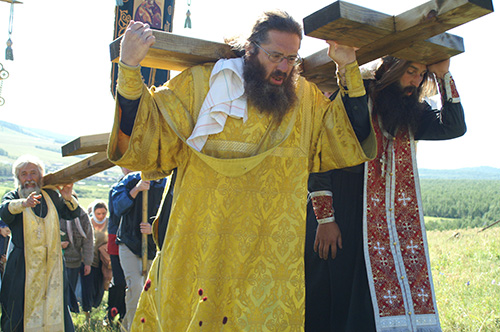 “Be an example to the believers in word, in conduct, in love, in spirit, in faith, in purity” (St. Paul’s first letter to Timothy 4:12)

Through the years I’ve been gifted with more than a few pectoral crosses, the sort that Orthodox priests wear in public, especially during the sacred services. Nearly all now are of gold, embellished with jewels, but the most precious is the heavy cross first given to me by a special person on my ordination day. It is of the sort made of silver, three bar Russian style, and on the back inscribed with the text above, the admonition to all priests, especially to the newly ordained. The last tsar of Russia, Nicholas II, had them struck and given to young priests before the revolution. I’ve turned it over and read it many times. “Be an example.” At that early age a young man hardly knows who he is himself. To be a model for others requires an enormous amount of spiritual gifts to offset his glaring imperfections. And if he thinks of himself as a prototype for others, he’s already in trouble. Too humble and he’ll be crushed, too sure of himself and he’ll be branded pompous, ridiculous or plain foolish. Nevertheless, he must be a paradigm of self-discipline and good conduct. He must be pure or he’s in the wrong profession; and if he is without faith, he’s a fraud. The hardest of those attributes above is the one that seems simplest: love. Whatever else a priest lacks, Lord have mercy on him if he is devoid of love. Yet unfortunately it does happen. Genuine love is both gift and challenge.

We were told in seminary to reread each year the famous explanation St. John Chrysostom gave to his friend St. Basil the Great when the latter wanted to know why St. John encouraged him to accept ordination, yet he himself was reluctant to do so. St. John said something about a vow he took to his beloved widowed mother to forego ordination until her death. He went on to emphasize the great burden of responsibility that came with the role of the holy priesthood. He said that when a lay person sins grievously, even to the extent of losing his place in God’s kingdom, there is a loss of one in heaven, but when a priest falls, he takes a hundred or more with him.

How tragic the plight of so many who had given up on God, Christ and the Church because of something that a priest said or did that offended his conscience. How difficult it is for any person to control his or her temper, but when a priest indulges himself in a temper tantrum, the spiritual shock waves are enormous. And he can never recover the loss of his position regardless of what he may say or attempt. An ancient proverb puts it thus: “An ill-trained doctor is a threat to life; an ill-trained priest is a threat to faith.”

To me the most difficult aspect of the holy priesthood is to hear confessions. Just to listen without bursting in with some comment is already a challenge, but to struggle with finding the proper response to what is revealed by the penitent demands at times the wisdom of Solomon. To appreciate that the person approaches the confessional with trepidation is to feel much like one is holding a young bird in the hand. Squeeze and it is crushed; open too soon and the bird flies off without the cycle of full confession, recognition, remorse, penance and absolution. The goal is spiritual transformation.

My seminary recently decided it will aspire to focus on preparing pastors for the ministry. All disciplines—scriptures, history, doctrine, and the rest—will be designed with the priest in mind. The goal is to send forth clergy equipped with all the spiritual tools a pastor will need to challenge contemporary society with the living gospel of Jesus Christ as uniquely presented by the Orthodox Church. May the Spirit of God be with them.