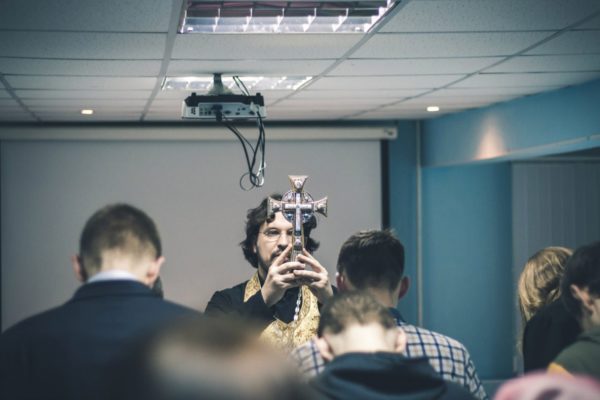 After His resurrection from the dead, the Lord Jesus appeared to His disciples in Galilee, as He had already told them, and He gave them the following commandment: “Go therefore and make disciples of all the nations, baptizing them in the name of the Father and of the Son and of the Holy Spirit, teaching them to observe all things that I have commanded you; and lo, I am with you always, even to the end of the age.” (Matthew 28:19-20)

Recall also what the Gospel mentions more than once: “Jesus went about all the cities and villages, teaching in their synagogues, preaching the gospel of the kingdom, and healing every sickness and every disease among the people.” (Matthew 9:35)

In these passages from the Gospel and others, He encourages His disciples (and among them, of course, pastoral priests) by way of imitating Him and through His commandments about the necessity of teaching, evangelizing, practicing the sacrament of confession and the forgiveness of sins, and healing soul and body.

We likewise see the Apostle Paul addressing his disciple Timothy and saying, ” be an example to the believers” and also “give attention to reading, to preaching, to teaching… take heed to yourself and to teaching” (1 Timothy 4: 12, 13, 16), with the result that priest must exert himself for the sake  of preaching and teaching and also for the healing of his own soul and the souls of others.

Of course, each one of us has his talents and his weaknesses. We pastors must know and admit our weaknesses and at the very least control them so that they will not become a stumbling-block. At the same time, we must develop our talents in order to build up the Church, the Body of Christ. In this way, the Church may contribute to the pastoring and healing of souls through us, the spiritual physicians.

Here I will address our beloved pastoral priests. A priest who is a pastor does not demand rights– he only has duties. The prophet Ezekiel says, “Woe to the shepherds of Israel who feed themselves… You eat the fat and clothe yourselves with the wool… but you do not feed the flock… The weak you have not strengthened, nor have you healed those who were sick, nor bound up the broken, nor brought back what was driven away, nor sought what was lost” (Ezekial 34:2-4).

In the New Testament we precisely see the profound, fundamental work of the pastor in following the example of the Lord Jesus, who alone is the Good Shepherd. He says, “I am the Good Shepherd. The good shepherd lays down his life for his sheep.”

The Lord practiced this pastoring all through His life on this earth in His sacrifice, as He suffered in secret on account of His love for man and his salvation from the establishment of the world and even to the end of ages. This is the highest model for imitation.