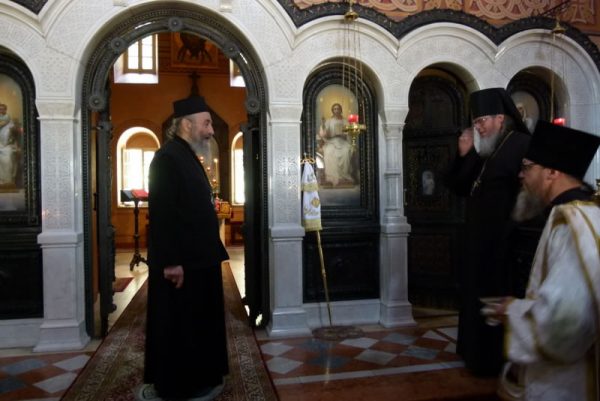 On Saturday, May 18, 2019, His Beatitude Metropolitan Onuphry of Kiev and All Ukraine visited the Convent of St Mary Magdalene in Gethsemane, Jerusalem, where he was greeted by Archimandrite Roman (Krassovsky), Chief of the Russian Ecclesiastical Mission in Jerusalem, his monks and Abbess Elizabeth (Smelic) and her nuns. Accompanied by the singing of “The Angel Cried,” His Beatitude venerated the altar table and holy relics of the “Royal Church” of the convent. After a brief prayer service, Fr Roman welcomed Metropolitan Onuphry, assuring him of the prayers for the canonical Church he heads and the people of Ukraine by the monastics of the Russian Orthodox Church Outside of Russia.

The Primate of the Ukrainian Orthodox Church expressed his profound gratitude for the prayers and support, wishing the monastics patience and heavenly aid in their difficult labors in the Holy Land. As they venerated the relics of Holy Grand Duchess Elizabeth and Nun Barbara, His Eminence anointed his fellow-travelers with oil from the lampadas which perpetually burn at their reliquary.

Metropolitan Onuphry then went to Ascension of the Savior Convent on the Mount of Olives. Here, under the peal of bells from the bell tower known as the “Russian Candle,” His Beatitude was greeted by Abbess Barbara (Novikova) and her sisters, proceeding to the church, where he venerated the holy altar table and the church’s relics, as well as the burial site of Archimandrite Antonin (Kapustin), one of the greatest Chiefs of the REM. In the chapel of St John the Forerunner of Christ, the pilgrims accompanying Metropolitan Onuphry made confession, and the Rules for Holy Confession were then read among the convent’s olive trees. His Beatitude then expressed gratitude for the opportunity to venerate the holy relics of the convent, and, together with Bishop Evsevy of Shepetovsk and Slavutsk and the pilgrims, departed for the Holy Sepulcher of the Lord for the celebration of night-time Liturgy.