Russians in the Holy Land: a New Book Published in Jerusalem

Source: ROCOR
Natalya Mihailova | 28 September 2015
A new Russian-language book has been published in Jerusalem devoted to the Russian presence in the Holy Land. 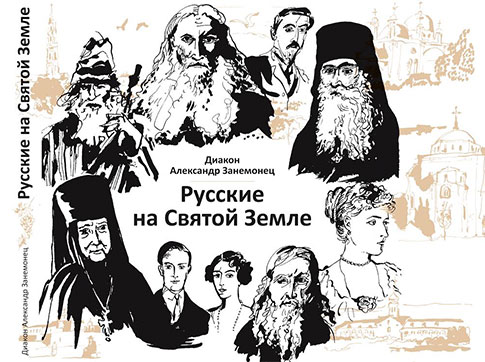 Written by Deacon Alexander Zanemontz, the book contains three hundred pages of text, hundreds of black-and-white archival and contemporary color illustrations and graphcs by the Moscow artist Ilya Viktorov. The foreword was written by His Eminence Metropolitan Hilarion of Eastern America and New York, First Hierarch of the Russian Orthodox Church Outside of Russia, and was published with the blessing of His Grace Bishop Agapit of Stuttgart, head of the publishing commission of ROCOR.

The story begins with the pilgrimage by Hegumen Daniil and St Evfrosinia of Polotsk in the 12th century and continues through the present day. From the life of St Evfrosinia we know that as early as the 12th century, during the time of the Crusades, there was a Russian monastery in the Holy Land. A great deal of attention is naturally paid to the period of the 19 th and 20 th centuries, with the official Russian presence in Jerusalem and mass pilgrimages from Russia were common.

The creation of “Russian Palestine” in the 19 th century was not only the result of government policy and Synodal decisions, but mostly a result of the ascetics who lived in the Near East. The Chiefs of the Russian Ecclesiastical Mission in Jerusalem and other clergymen, as well as nuns and laity chose to settle in Palestine. No one was there against his will; the Holy Land drew only those who wished to live and pray there. Archimandrite Antonin (Kapustin) headed the Mission for almost thirty years in the second half of the 19 th century, and did not return to Russia even once during the period; he felt at home in the Christian East and nurtured a genuine love for it. He was not even lured back to Russia with promises of being consecrated to the episcopacy, as was common in those days. As a rule, most of the members of “Russian Palestine” hailed from the free classes-the scholarly monastics, merchants and state serfs. There were the first to be emancipated and did not wait for instructions.

Many Russian monasteries and churches in the Holy Land were built through the labors and personal sacrifices not of individual benefactors, but by the Russian people as a whole. The land upon which Gorny Convent was built was purchased by means of collections from newspaper advertisements. The means to support Russian schools or the construction of pilgrim hostels-organized by the Orthodox Palestine Society-came from Palm Sunday plate collections. The OPS, later called the “Imperial” Orthodox Palestine Society, was one of the greatest social organizations in pre-Revolutionary Russia.

The book also focuses on the life of “Russian Palestine” in the post-Revolutionary period, which the contemporary Russian reader may know little about. As Metropolitan Hilarion writes in his foreword, “This is crucial, for the Russian Orthodox presence in Jerusalem continued uninterrupted even after 1917: the Russian Ecclesiastical Mission in Jerusalem and social organizations continued their service. Moreover, between the two World Wars, new communities were formed: in Bethany, and later in Gethsemane a convent took root, established by two Scottish nuns, converts to Orthodoxy… Great figures of the Russian diaspora labored there: Archbishop Anastassy (Gribanovsky) and Archimandrite Kiprian (Kern). The abbess of Ascension Convent on the Mt of Olives was for many years in the second half of the 20 th century Matushka Tamara (Bagration-Mukhranskaya), the daughter of Grand Duke Konstantin Romanov (the poet who wrote under the pseudonym “KR”) and a relative of the Tsar.

The book includes many old photographs from the archives of the Russian monasteries in Jerusalem and in France, from the collection of the Imperial Orthodox Palestine Society and the American colony in Jerusalem. Often old and new photos are juxtaposed, for the history of the Russian presence in the Holy Land continues to this day. “In our time, when borders have opened,” writes Vladyka Metropolitan, “we can make pilgrimage to Jerusalem and Bethlehem, to Galilee and the Judean wilderness. And we can participate in this service [of piety] which generations of our ancestors performed in the Holy Land.”

The author, Fr Alexander, is an Orthodox Christian deacon. Over the course of many years he has taught history in the colleges of Israel, and organizes and leads pilgrimages. He is the author of the guidebook “A Week in the Holy Land. A Pilgrim’s Guidebook.” The present book is available in bookshops in Jerusalem and Moscow, and in some churches of St Petersburg. For more information, contact the author at zanemonets@yahoo.com,