When an ordinary human being is deluded into thinking he possesses the personal power to singlehandedly redeem another, something has gone terribly wrong. He has succumbed to a blasphemy of the worst sort—the belief that he is a god, able to direct the destinies of lesser mortals. You can imagine what happens to this poor creature when he is unable to meet his own exalted expectations and comes crashing down to earth again...
Priest Richard Rene | 14 March 2010 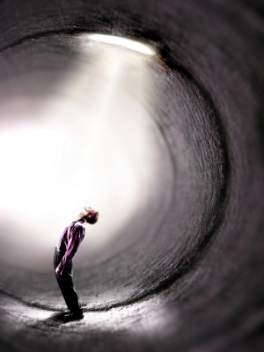 As a priest and a pastor, I am particularly susceptible to a temptation known as “the Saviour complex.” This is the belief that I possess god-given abilities, powers and charismas to manage and fix other people’s lives.

My “stinking thinking” goes like this: if I can be compassionate and kind enough to others, if I can devote enough time and energy to them, if I can preach or teach well enough, then I can lift those in my care above the chaos and destruction of their lives. Like some kind of spiritual Superman I can fly in and save the day!

It’s pretty obvious that such an attitude is personally destructive. When an ordinary human being is deluded into thinking he possesses the personal power to singlehandedly redeem another, something has gone terribly wrong. He has succumbed to a blasphemy of the worst sort—the belief that he is a god, able to direct the destinies of lesser mortals. You can imagine what happens to this poor creature when he is unable to meet his own exalted expectations and comes crashing down to earth again…

Yes, the problems with the Saviour complex are pretty clear. To quote a character from Corner Gas, “It’s not rocket surgery.” And yet I am not the only one who falls prey to these kinds of temptations. All of us who would actively practice our faith by regularly serving others can fall prey to the delusion that the salvation of those whom we serve rests on the extent and extraordinariness of our personal resources.

Does the transformation of human lives involve our gifts and efforts? Absolutely. The Apostle Paul says simply, “Bear one another’s burdens and so fulfil the law of Christ.” (Gal. 6:2) In addition, the Gospel offers almost countless injunctions and examples that predicate our salvation on mutual love and service.

But where does healthy involvement in the acts of charity towards our neighbours degenerate into the conviction that their eternal destinies depend on us and our efforts? How do we draw the line between simply obeying Jesus’ commands, and using those commands as an opportunity to stroke our own egos?

Mother Gavrila was well-known for her personal holiness and her care for all those who visited her. Day in and day out, visitors would come to her, so that there were often line ups for hours outside her monastic cell. The other nuns who observed these visits noted that while the visitor was present, Mother Gavrila would be so focused upon them, that the rest of the world would disappear. She would ignore both her own needs and the needs of the bystanders, making the concerns and sufferings of her visitor the centre of everything—laughing with them, weeping with them, suffering just as they did.

When the visitor departed, however, Mother Gavrila would go to the corner where she prayed and offer a few words of intercession for that person. Then she would forget about them. The burdens she had carried during the visit were lifted from her. She was light-hearted again, ready to make the next visitor the centre of her attention.

Mother Gavrila’s behaviour could, on first inspection, seem rather callous. In reality, though, she demonstrates the principle of dispassion, which is crucial to anyone who serves God by serving other human beings.

Ultimately, we are stewards of the things God has given us. Our gifts, abilities, ministries, belong to Him, and we are only entrusted with them for a time, charged to use them for His glory until He returns and calls us to account.

When we are called to perform a task or serve a person, that task or person must be central. We must prepare for the encounter with as much care as we can muster. When we get on with the task, all of our enthusiasm, effort, and emotion must be devoted to its completion—just as Mother Gavrila did.

Once the task is complete or the person leaves our presence, however, Mother Gavrila’s story reminds that it is time to commend them to God and disconnect from the effort. Whatever happened was ordered by God and accomplished according to His will. What He chooses to do with that event is in His hands, not ours.

Our challenge, then, is to simply offer what is past to Him and be done with it. If we made a mistake, we can amend it if or when the opportunity presents itself again, with as much consideration as anything set before us in the present moment.

Mother Gavrila’s dispassion is not by any means callousness or indifference. Agonizing over the destinies of others, however good-intentioned, is nothing more than pride, pure and simple. When people come before us, we serve and love them to the extent we are able in that moment. When they leave our sphere of activity, we relinquish them to the only One who controls their destinies—the real God and Saviour.

I was once told, “The ultimate significance of your life is none of your business.” Remembering that piece of advice—remembering to live simply as a creature, a servant, a steward—is difficult and challenging enough. We hardly need to take on the burden of controlling our own fate, let alone that of the rest of humanity.