One of the most beautiful of all the Gospel Lessons in our Church year is this Parable of the Prodigal Son. Only the Lord, who searches and knows the human soul, its every rising and falling, could have delivered such a parabolic masterpiece. No other parable adequately portrays the depth and the mysticism of the goodness of God towards His prodigal sons.
Protopresbyter George Dimopoulos | 24 February 2008

“It was meet that we should make merry and be glad: for this thy brother was dead, and is alive again; and was lost and is found” (Luke 15:11-32) 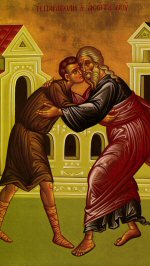 One of the most beautiful of all the Gospel Lessons in our Church year is this Parable of the Prodigal Son. Only the Lord, who searches and knows the human soul, its every rising and falling, could have delivered such a parabolic masterpiece. No other parable adequately portrays the depth and the mysticism of the goodness of God towards His prodigal sons. The Fathers of the Church purposely appointed that this parable be read the second Sunday of the Lenten Triodion, in order that young people might hear it, and that pastors might explain its significance in their lives. Another scholar of Sacred Scripture and Theology writes that the fathers placed this Gospel Lesson where they did because this is the time of year that many youths left home to seek employment elsewhere, some emigrating to other countries. Let us hear again the words of this beautiful lesson:

We hear of a father with two sons, a wealthy man, a good steward and master of his household. He had great love for and interest in his children, and he tried to give them an appreciation for the finer things in life. But one day he is approached by the younger son, who demanded his freedom. The kind of freedom he wanted is the freedom that the world talks about today: the freedom in whose name crimes may be committed, revolutions conceived, riots incited; in short, license, for which so much blood is spilled today in our streets by those who want their privileges, with no regard for the rights of their neighbors. The younger son foresaw for himself a bright future. In modern terms, he wanted to turn on to narcotics, to engage in lotteries and sexual passions to appease his lust. Today’s prodigal son is enticed by the world, with its hippies and yippies, its existentialists, nihilists, and revolutionary anarchists. He wants no part of self-discipline, a prodigal son. He wants his FREEDOM.

So our young man is enticed by the world and all its sinful allurements. He unashamedly stands before his father and demands his “rightful share” of his father’s estate, as if his father were already dead. The only time many young men today realize that their fathers exist is when they are in need of money. And the father in our parable, like so many fathers today, could not say no to his son; he gave him all that he asked for. And even then he did not stop loving him. As soon as the young man got what he was after he skipped town — off to the bright lights — to the big city — to wine, women and song, with perhaps a few perversions thrown in for good measure.

Away from the watchful eye of his loving and concerned father, the son could indulge in any type of sin he chose — no matter how depraved. Freedom from father — freedom from moral law; the young man had the freedom he wanted so badly, but he soon found himself enslaved to a dreadful master — sin. Well does St. Paul warn us, “Let him that thinketh he standeth take heed lest he fall” (I Corinthians 10:12)

In a short time, the young man’s money was gone, and so were his friends. Meanwhile, the local harlots were quite a bit wealthier, and the young man began to learn about the wages of sin. He had thought himself a slave in his father’s home. Was he free now? Was this freedom, starving to death in a cold gutter, laughed to scorn by those who now had his father’s money? “There is a way which seemeth right unto a man; but the end thereof are the ways of death” (Proverbs 14:12)

The young man had discovered that our lives are like a train on a track. As long as the engineer obeys the laws of safety while operating the train, it will reach its destination safely. But the moment that engineer becomes careless, the train can easily be derailed and smashed to pieces before the engineer even realizes what’s going on. The same happens when we disregard the immutable moral laws that God set in motion when He created the universe. Broken laws — when they are God’s laws — carry their own automatic punishment. “The wages of sin is death” (Romans 6:23) But there’s a bright side to that picture, because the second half of that same verse reads, “BUT (and someone has called that the most beautiful “but” in the Bible) the GIFT of God is eternal life through Jesus Christ our Lord.” Praise God!

No unrepentant prodigal ever comes into everlasting life, beloved; fortunately for him, our prodigal came to his senses. He grew tired of eating with the hogs he was tending. He decided to return to his father as a bondservant. Yet he was most pleasantly surprised; his father reinstated him as his son. And that is just what happens when we approach God through Jesus Christ. God adopts us as His own children. What a merciful Father! The prodigal in our parable decided it made more sense to return to his father than to continue in sin, which would eventually take his life. What about you? Aren’t you tired of rebellion; aren’t you sick of torturing yourself? Come to the Lord Jesus Christ. Give your life to Him, and find out what life is all about.