The Publican and Me

Source: Fr. Ted's Blog
One of the lessons of the Gospel Parable of the Publican and the Pharisee is that humility is a virtue needed as a precondition for further spiritual growth.
Archpriest Ted Bobosh | 01 February 2018 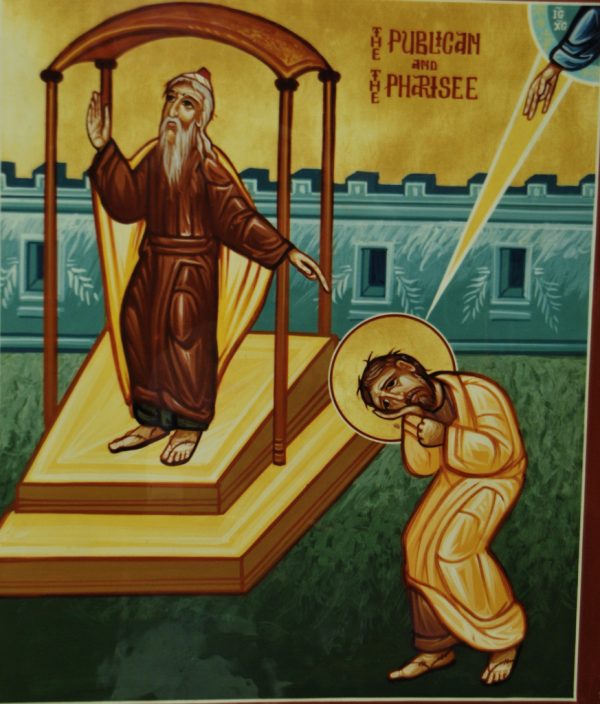 One of the lessons of the Gospel Parable of the Publican and the Pharisee (Luke 18:10-14) is that humility is a virtue needed as a precondition for further spiritual growth.  It isn’t a goal that we strive for and hope to achieve in some distant future after years of Christian maturation, but it is part of the foundation we need for further growth.

Think about Moses, that mighty hero of the Old Testament who defied the mighty Pharaoh of Egypt and led a slave rebellion against the Egyptian Empire.  God speaks to Moses face to face the Scriptures tell us (Exodus 33:11)and God even backs down when challenged by Moses who intercedes for Israel.   Yet, God calls Moses the most humble man who ever lived (Numbers 12:3).  Certainly, we see in Moses that being humble does not mean lacking courage.  But it is Moses own humility which God finds so virtuous in Moses.  Moses was not arrogant, did not seek things for personal gain, and served both God and the people faithfully even when the people and God were displeased with him.  In all of this, Moses is a Christ-like figure.  But humility was the virtue at Moses’ heart.

And Jesus Himself tells the Parable of the Publican and Pharisee to extol the virtue of humility.  We’ve all been told endless times that the Pharisee in the story is the religious zealot.  He does everything he boasts of doing.  He is not lying nor exaggerating but telling the truth about his piety.  He is laying claim to the reward he assumes God must bestow upon him for his virtue.  The Publican is the notorious sinner of the parable, who admits before God that he is a sinner and begs God’s mercy.  As even St. John Chrysostom notes it is not particularly humble to admit you are a sinner when in fact you are one – you are just acknowledging the truth of the matter.  The Publican has little to commend himself to God, and yet it is he not the pious and self-righteous Pharisee that is favored by God because God rejects the pride of the Pharisee and embraces the humility of the Publican.  The Publican goes beyond admitting to the truth and accepting the judgment that is laid on him.  Therein lies his humility.  He cannot lay claim to any reward for virtue, but opens himself to the mercy and love of God.

Almost everyone has a kind of person or sinner they particularly despise and wish evil on.  When I visit inmates in prison, the murderers despise the child molesters.  Everyone seems able to imagine a sinner worse than themselves, someone else who is the foremost of sinners and perhaps beyond God’s grace.

One inmate I visited in a prison told me a story which really was his living out the Parable of the Publican and the Pharisee.  He was in prison for having been involved in the manslaughter of his pregnant girlfriend and the baby she was carrying.  One day in prison, he learned he was being assigned a new table place at meals – directly across from a child molester.  He despised child molesters.  He was seething with anger that he would now have to sit across from this pedophile at every meal.  This ruined not only that day but threatened to ruin every meal he would eat.  As he sat at table with his food in front of him, stewing in his anger and hatred, the child molester sat across from him, and not even looking up, he humbly bowed his head and quietly said grace over his food:  “God, thank you for the food you have given me and for providing for me every day though I am a terrible sinner living in prison where I deserve to be.  Forgive me, Lord, for my sins are many.”   Sitting across from this man, shame came over the inmate.  For he had started eating without giving thanks to God or saying any prayer, and found himself consumed with hatred.  He felt total embarrassment that he was being so judgmental because he felt himself to be a Christian, and yet here was this man praying and confessing his sins at the table while all he did was internally rage with anger.   It is easy to be the Pharisee.

So, now retell the Parable of the Publican and Pharisee.  Who is the Publican in your life – the liar, the murderer,  the child molester,  the homosexual, the criminal, the adulterer, the thief, the user of pornography, the drug pusher, the abuser, the angry, the greedy, the narcissist, the obese, the person who doesn’t use their turn signal, the driver using their cell phone?   Who is the kind of person you really despise?  Now tell the parable:

Two people went to our church to pray.  I was one, and the other was . . . (name the worst sinner you can imagine – whether by name or by sin they commit). . .

I went to the front of the church and stood before the icon and prayed:  God I thank you that I am not like those who sin against You.  I fast most of the days during Lent, I pretty often remember my prayers, I donate some money to the church and to charity.  I am especially thankful that I am not like … (name that sinner or kind of sinner you hate the most) because he/she commits the most horrible kind of sin.

The … (name that sinner or kind of sinner you hate the most) … knelt in the back of our church, bowing his head before God, wringing his hands and quietly weeping in his heart, he prayed, “God be merciful to me the sinner.”

Jesus said:  “I tell you, this person went down to his/her house justified rather than the first; for every one who exalts himself will be humbled, but he who humbles himself will be exalted.”  (Luke 18:14)

Show Paradise Through What You Say & Do

Archimandrite Amilianos teaches: In conclusion, I would like to read a few lines from a discourse by St. Basil…

Is Being Good Enough?

Jesus never taught us “Be good.” He never said those words.

The Rich Ruler and the Average Orthodox Parishioner

"Now a certain ruler asked Him, saying, “Good Teacher, what shall I do to inherit eternal life?” So…