Source: Antiochian Orthodox Christian Archdiocese of North America
The Holy Orthodox Church begins a four-week period of preparation for Great Lent with the reading of the parable of the Publican and Pharisee.
Fr. Nicholas Belcher | 17 February 2019 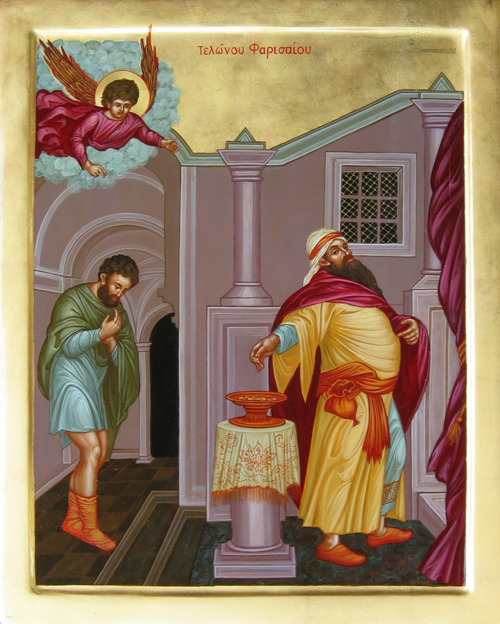 Let us not pray, brethren, Pharisee-like; for he who exalteth himself shall be abased. Wherefore, let us humble ourselves before God, crying by means of fasting, with the voice of the publican, saying: God forgive us sinners. First Sticheron of Vespers

The Holy Orthodox Church begins a four-week period of preparation for Great Lent with the reading of the parable of the Publican and Pharisee. We hear Our Lord describe two men going to the Temple to offer prayers. One is a Pharisee, who zealously keeps the Law through prayer, fasting, and tithing; the other is a publican, who brazenly breaks the Law through extorting his own people on behalf of the Roman occupiers. The Lord teaches that after each had prayed, the publican is the one who “went to his house justified rather than the other.” How did the one who was unjust leave justified in the eyes of the Lord, while the other was left unjustified?

The answer lies in the way the two men approached their prayers in the Temple. The Lord describes the prayer of the Pharisee with this illuminating turn of phrase: “[he] prayed thus with himself.” In other words, the Pharisee’s prayer was not directed towards God but to his own ego. He deluded himself into thinking he was offering gratitude to God for his righteousness, but in reality he was simply boasting of his fasting and tithing and exalting himself over “other men” – including the tax collector standing nearby. St. Nikolai of Zica teaches of this “prayer” of the Pharisee: “He is not thanking God for anything; on the contrary, he is blaspheming against God by blaspheming against the rest of God’s creation. He is thanking God for nothing; everything that he says about himself is expressed as his own doing, achieved without God’s help.”

St. Theolphylact, in his commentary, rightly points out that if the Pharisee were truly grateful to God for his “virtues,” he would recognize that any good deed of his came from God’s grace, not his own efforts, and he would thus be unable to judge himself better than anyone. He also failed to realize that his righteousness was merely an external righteousness, not the “humble and contrite heart” God actually desires.

The publican, with an acute awareness of his sinfulness, offered his prayer with downcast eyes while beating his breast, saying only: “God, be merciful to me a sinner!” His prayer had no boasting, only humility. He offered no excuses or justifications for his actions, merely pleas for forgiveness. He judged no one, condemning only himself. Although his sins were great, the Lord granted him forgiveness and justification. St. John Chrysostom, in his reflection on this beautiful parable, boldly encourages us thus:

Truly, who is worse than the tax collector? He took advantage of others’ misfortune, embezzled in others’ hard work, and shared in others’ earnings; he was a ruthless extortioner, a courteous crook, a lawful sinner. If, therefore, such a person received this great gift solely because he displayed humility, how much more will be given to a virtuous person who is humble? Therefore, if you confess your sins and you become humble, you will be justified and reconciled with God.

As we begin our journey to Lent, let us take to heart the Lord’s example of these two men and their way of prayer. When we fast and give alms during Lent, we must keep in mind that the Pharisee did these things and remained unjustified. When we go to more church services and offer more prayers, we must remember that going to the Temple to pray did not bring the Pharisee God’s mercy. To be justified, we must flee from the Pharisee’s pride in his spiritual achievements and his judging of others. We must embrace the humility and contrition of the publican and his complete lack of self-justification.

The Church offers us a week that is free from fasting on the Wednesday and Friday following the reading of this parable. We can choose to look at this week as a time of gorging ourselves ahead of the coming fast, but we would be missing the point. In a certain way, we should change our mindset this week from “we don’t have to fast” to “we don’t get to fast.” The Church takes the fasting from us so that we are reminded that fasting is not an end unto itself. We don’t get to fast so that we cannot boast – as the Pharisee did – that we always keep a fast twice a week, and thus we put ourselves during this week into the humble position of that sinful Publican.

Let us spend this week reminding ourselves that the spiritual work that lies ahead of us will only be fruitful and profitable if it is accompanied by asking mercy from God with sincere contrition and true repentance, and granting mercy to others from our whole hearts. As we refrain from fasting, let us cultivate that humility of the Publican to carry with us for our Lenten journey. Let us place firmly in our minds – as the hymn quoted above teaches – that the fasting we will do later on will only be our means of being able to humble ourselves and cry out: “God forgive us sinners.”