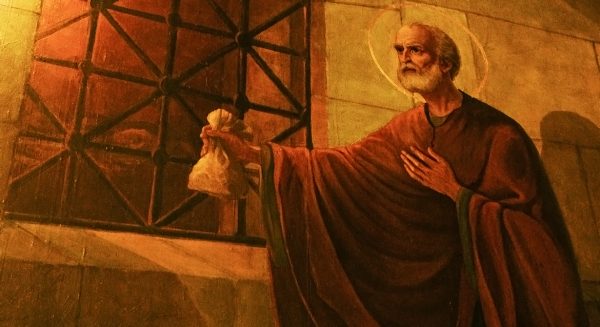 Sinter Klaas, the Dutch name that we Americans transliterated into Santa Claus, obviously refers to Saint Nicholas, one of the most beloved of all saints throughout the world, and whose memory is actually celebrated today on December 6th/19th. Travel across Europe and you can literally find thousands of churches named in honor of St. Nicholas. Greece and Russia look upon St. Nicholas as the patron of their country. In fact, in almost every port throughout Greece you will find a St. Nicholas Chapel, signifying him as the patron of sailors. And not only sailors, but orphans and children turn to St. Nicholas as their patron and protector.

Although our American secular society has tried to turn this greatest of real life saints into a jolly, fat man who wears a funny red outfit and brings a good spirit and lots of gifts to children on Christmas day, Christians never lose sight of the real Saint Nicholas, the 4th century Christian Bishop of Myra, whose real life has inspired so many people throughout the world that they have created countless legends and stories lauding his Christ-like spirit.

Since childhood, many of us have heard stories of Nicholas’ generosity, like when the saint helped the poor man with three daughters by tossing bags of gold into his house. Although certain stories or legends may seem far fetched, we must take care not to lose their underlying meaning, which lift up the many Christ-like virtues which St. Nicholas so beautifully exemplified in his life, and which we also are called to cultivate in our own lives.

What were some of these holy characteristics that Saint Nicholas possessed?

First of all, St. Nicholas stood up for the truth of God, even suffering for it. Nicholas lived through the persecutions of Diocletian, the last Roman emperor who persecuted Christians in the early part of the 4th century. Under the threat of imprisonment and even death, Nicholas continued to proclaim the Good News of God’s love through Jesus Christ. And he suffered for it. The Romans imprisoned him and threatened his life, yet he wouldn’t deny the truth, nor waver in his strict stance for the standards of the Gospel. This same zeal for the truth came out during the First Ecumenical Christian Council, when Nicholas was one of 317 bishops who articulated and defended the fullness of the Christian faith – specifically that Jesus is fully God as well as fully human, and that Jesus is one with the Father.

His courage and boldness to live out life like Jesus, even when the surrounding society ridiculed and even threatened such a lifestyle, is something with which we contemporary Christians must learn. Christianity, as an authentic way of life, is not for the fainthearted. Christianity was never meant to be a ‘status-quo,’ comfortable, easy religion of the masses. Christ called his followers to a life of divine love, which automatically implies a life of sacrifice and humble service to others. This is why Jesus reminded us that few people will have the courage and commitment to walk that narrow path! St. Nicholas was one who faithfully walked this path.

This leads us to a second quality that stands out from the life of St. Nicholas. Not only as a bishop and a good shepherd of the Church, but also as a faithful Christian, Nicholas fought against the temptation of self-centeredness – an illness of our fallen nature that plagues each of us – and he did this by constantly looking for ways to reach out to others, especially helping the oppressed, defenseless and marginalized people of society. Bishop Nicholas was not a leader who reveled in power and authority, but he understood himself as a disciple of the One who washed His disciples’ feet and who constantly cared for the poor. Being a Christian is all about serving others, thus Bishop Nicholas modeled true Christian leadership as servant leadership – always placing the needs of others before himself!

We have many stories of Nicholas reaching out in compassion and kindness to the orphaned, to the estranged, to the prisoners, and especially to the defenseless. The Christian Gospel always points its followers to love “the other,” to love those outside of ourselves. True love of God equals a love of our neighbor, a love for all others. The Church and all Christians must always have our central attention on charity, outreach and mission – bringing God’s love to others!

The world outside can be an isolated, lonely, often harsh, and an even mean place to live. How bright our light will shine if we radiate Christ’s unconditional compassion, kindness, love and charity, as St. Nicholas did throughout his lifetime.

A third virtue from St. Nicholas’ life is his generosity. Bishop Nicholas suffered the life of an orphan, losing both his parents during his teenage years. Yet from the moment that Nicholas received a rich inheritance, he generously distributed his wealth to those in need. He did not seek to use his wealth for his own well-being and comfort but realized his wealth must be used to enrich others!

When Christ’s Spirit fills the heart of a disciple, we joyously want to imitate our Lord’s example by giving all that we have to help others. True joy comes through giving. True meaning in life comes from helping and serving others. And the generosity of our giving reflects the maturity of our faith!

A final aspect that St. Nicholas so beautifully exemplified in his giving was the spirit of anonymity. He gave generously, but never for fame or for praise. He simply gave because he understood how generous God was to him first. He understood that everything he had was God’s, and he didn’t want to take credit for anything he gave away. How much can we all learn from that – to give in a secret manner, all for the glory of God!

A courageous and bold defender of the truth, a compassionate and loving helper of the defenseless and needy, and a generous and humble steward of God’s gifts – these represent some of the many virtues of the true Santa Claus, St. Nicholas.

Throughout this Advent season, when we see and hear many references to a fat, jolly old man in a red suit, and even as we read books or tell stories to our children and grandchildren about Santa Claus, let us never lose sight of the true Santa Claus – Saint Nicholas, Bishop of Myra. And let us try to live out and teach our children and grandchildren about the Christ-like virtues that made Nicholas one of the world’s most beloved patrons and saints!