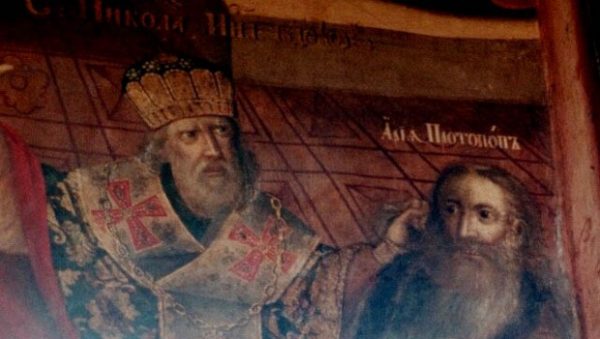 The Nativity Fast has begun and Christmas is just around the corner. Trees are soon to be decorated. Children around the world will make lists, check them twice and anxiously await the arrival of Santa Claus. However, parents beware! Jolly old St. Nick served time in prison. I’m not kidding! The man who slides down your chimney with a bag full of presents went to jail for assault.

Should parents be concerned? Should we run a background check on Santa before letting him into our homes this year? Before we rush to fit Santa with a bright orange jumpsuit, a look back into history is needed.

The man the world knows as Santa Claus is actually the embodiment of one of the great spiritual figures of ancient times. His name is Nicholas of Myra, and long before Evangelical TV star Kirk Cameron popularized his story in his latest movie, Orthodox Christians were celebrating his life every year on December 6th. Nicholas is not simply another Christmas legend among many – for Orthodox Christians, he is honored as a saint and wonderworker.

St. Nicholas of Myra was born during the third century in what is modern-day Turkey. The son of wealthy parents who died during an outbreak of disease, St. Nicholas chose to use his inheritance to serve the poor -especially children. One story tells of a man with three daughters who were to be sold into slavery because their family had no money. Amazingly, three bags of gold appeared in their home, providing the needed money for the family. The bags of gold, tossed by St. Nicholas through an open window, are said to have landed in shoes left before the fire to dry. This led to the custom of children hanging stockings.

So how did St. Nicholas end up in jail?

St. Nicholas’ service to the poor led him to become a bishop in the city of Myra. As part of his duties, Nicholas attended the Council of Nicea in 325 AD. The Council of Nicea was a meeting of leaders who came together to understand the fundamentals of the Christian Faith. At this meeting, a skilled orator named Arius argued against the beliefs we know as Orthodox Christianity today. Nicholas, hearing these arguments, became enraged and struck Arius in front of the Roman Emperor Constantine. The Council was horrified, and St. Nicholas was stripped of his leadership position, put in chains, and thrown into jail for his crime.

St. Nicholas was wrong to strike Arius and knew that violence in the name of faith can never be justified. He prayed for forgiveness while remaining steadfast in his defense of the Orthodox Christian Faith. Ancient Tradition then has it that God, seeing his faith and humility, visited St. Nicholas in his prison cell one night, removed his chains, and returned to him his garments and staff. The next morning, the prison guards found him in his jail cell dressed as a bishop silently reading and praying. The Emperor received word of these mysterious events and quickly ordered him released, realizing that God had sent him a message. Nicholas then rejoined the Council of Nicea and helped put into words what we know as Orthodox Christianity today.

So yes, Santa Claus went to jail and in doing so taught that forgiveness is better than revenge and that humility is a quality that makes us uniquely human. Today, the works of St. Nicholas of Myra inspire people around the world, and many say that even now he walks among us, making the impossible possible.

At a time when the holidays are defined by Black Friday and family stress, what better way to return to our roots then to pause on December 6th and celebrate a man who reminds us that our lives have meaning when we practice forgiveness and serve others? This year, remember the time Santa Claus went to jail and the life of St. Nicholas of Myra -the saint who knows how to not only throw a mighty punch but more importantly works wonders even today.

And let’s all be sure to remind Kirk Cameron and his Evangelical friends that the story of St. Nicholas of Myra was first told in the Traditions of the Orthodox Church.