The Saint Who Was Santa Claus 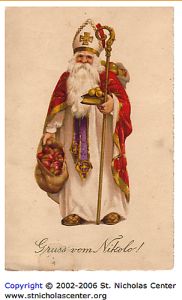 Dominating our Christmas, rather “holiday” season, (we do not want to be offensive to our non-Christian and non-believing friends) , is the Santa Claus legend. The Santa figure and the gift giving displays find their source not in Jesus Christ as much as in the story by Clement Moore, “The Night Before Christmas.” which is itself a distorted derivative of the actual life of the great Orthodox bishop Nicholas who lived in the small coastal town of Myra in what is today Turkey.

In the Moore poem, a modern family is invaded by a well-meaning old man who leaves gifts nobody seems to have asked for or even want. This is the first distortion of the real situation. May we all live our lives and lack nothing! Yet if we can penetrate the stories told of the actual fourth century bishop, under the layers of legend that cover St. Nicholas throughout the centuries, we find one feature common to each tale, no matter how distorted: Bishop Nicholas always aids those in dire need. Despite the myths surrounding the event, the extreme circumstances of those in the tales of St. Nicholas are much more like the life we know than the family in the Moore story.

We cannot imagine a “right jolly old elf” who has no contact with our lives, who we neither call upon nor need, yet who brings us gifts we could well do without. What purpose does it serve to perpetuate this story in the fantasies of our children?

We can, however, conceive of one who lived among his people, praying with them weekly and for them daily, knowing their lives as well as they. Could he have prayed for them without wanting to come to their aid? Would he not have done whatever was possible, going to any conceivable length to protect or to help those whom he loved? Not only did he “know if they’d been bad or good,” because they would have confided in him as bishop, confessor and guide. It was no mystery that he would have known what they lacked, and he did whatever he could to obtain it.

After the age of the Lord’s first apostles, who went about the known world preaching of the messiah they had lived with for three years, Jesus of Nazareth; and after the death of even those who could say they had spoken with one of the original apostles, a deep spiritual need was felt throughout the Christian church.

It was not enough to speak of Christ; only for awhile could all the baptised Christians be satisfied with the promise of His second coming. Those who called themselves followers of Christ had to show by their living example what it meant to walk in the footsteps of the Savior. How are we to be like Christ in the world? Just what is expected of us here, now, in our world?

This is what Bishop Nicholas is to us; the one who showed how to believe in Christ and yet be in the world of our times. He taught by example the way one follows Christ. This is what is meant by calling those like him “saints.”