The Holy Church glorifies him in its hymns as a feeder of the hungry, a guide to those lost at sea, and the quick helper of all who are in trouble and afflictions. And, indeed, his entire life is a continuous series of benefactions rendered to suffering people.
Archimandrite Kirill (Pavlov) | 19 December 2014 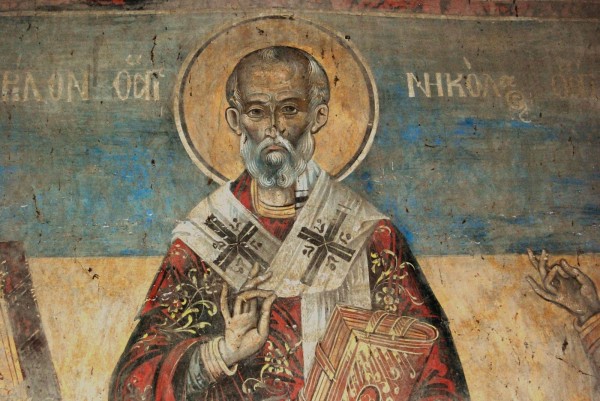 Dear Brothers and Sisters! When the Lord was preaching the word of God on earth, He was surrounded and thronged by thousands of people. His disciples crowded the closest to Him; there were others who desired to hear the holy preaching; there were also those who came with the secret hope of finding healing from their various afflictions. In short, a river of human sorrow sought out the feet of the Merciful Teacher. And He, having granted healings, stood on the plain and opened His mouth, speaking for all times the immutable Divine commandments: Blessed be ye poor in spirit: for yours in the kingdom of God. Blessed are ye that hunger now: for ye shall be filled. Blessed are ye that weep now: for ye shall laugh. Blessed are ye, when men shall hate you, and when they shall cast out your name as evil, for the Son of Man’s sake. Rejoice ye in that day, and leap for joy: for behold, your reward is great in heaven (Luke 6:20-23).

Did humanity respond to these holy appeals of his Savior? Yes, it did respond: in the persons of the Apostles, Holy Hierarchs, Martyrs, Venerable Ones, and all true followers of Christ. Their humble hearts accepted His commandments, bringing forth rich and abundant fruit. Humility became the root from which other fruits of the holy faith grew. Humility elevated people, granting them manifold gifts of grace and glorifying them in the Heavenly Kingdom. Among those humble and meek laborers and ascetic strugglers of virtue was he who is now being honored by Christ’s Church, St. Nicholas, the great God-Pleaser who, having heard of Christ and His saving teaching, followed Him steadfastly and faithfully, precisely fulfilling the Gospel commandments, and striving in all things to imitate His Master.

Born in the Lycian country of the pious parents Theophan and Nonna, St. Nicholas grew from childhood into a humble and God-fearing youth. Inspired by simple, but living and heartfelt faith, in his zeal for God’s glory he was akin to other great zealots: the Prophet of God Elias and the Baptist of the Lord John. His zeal for the glory of Christ God was manifest when, at the First Ecumenical Council, he could not tolerate the heretical blasphemy of the heretic Arius and slapped him on the cheek, for which he was condemned by the Fathers of the Council. But the Lord, Who appeared along with the All-Holy Theotokos to certain of the Holy Fathers, acquitted him and restored him to the epsicopal rank: the Fathers saw a vision in which the Savior Himself gave him the Gospel, while the Mother of God gave him an omophorian. He was justified, because his action was not the consequence of depravity of heart or rudeness, but came as the result of zeal on behalf of the glory of God.

On another occasion, his righteous soul, revolted by the unjust condemnation of the innocent, became inflamed with zeal for their salvation and he, laying down his own soul for his neighbor, saved them from death. Thus, too, does he visit prisoners in jail and miraculously save those at sea.

Thus has Christ’s Holy Hierarch, St. Nicholas, been glorified for his mercy, compassion, and help for those in need. After all, we, due to our weakness, mostly turn to God and His saints for help in our bodily and spiritual needs, and most often to those saints who have shown especially many works of mercy and help for the suffering. With a severe, strict, and silent external appearance, the Christ’s Holy Hierarch possesses rare spiritual goodness, tender-heartedness, and compassion for all those who are afflicted and suffering, and always hastens to the help of those who call upon him. Therefore he enjoys the special love and veneration not only of the Orthodox people, but even among Jews, Muslims, and other heterodox. Everything under the sun is full of his miracles, which are generously bestowed upon all who in sorrows turn to him.

The Holy Church glorifies him in its hymns as a feeder of the hungry, a guide to those lost at sea, and the quick helper of all who are in trouble and afflictions. And, indeed, his entire life is a continuous series of benefactions rendered to suffering people.

Here is one such example. One unfortunate man went broke and, having three grown daughters, in his desperation was determined to improve their lot in a vile way: by selling the girls’ honor. The Saint learned of the plight of this family and, without waiting for a request, sought to prevent sin and evil, wanting to save both the souls and bodies of the innocent girls from shame. Under the impenetrable veil of midnight, he came to the house of the poor people and secretly threw a bag of gold coins through the window and then discreetly hid himself. He made sure that the father of the girls disposed of his gift well and, making reasonable use of it, he twice repeated his blessing, until all three girls were arranged for. But the grateful father waylaid his secret benefactor the third time, throwing himself at his feet and saying: “How can I thank you, O man of God!” “By silence,” replied the Holy Hierarch. Not only during his life, but after his death he has not ceased to do good to those who turn to him with prayers. Therefore, of the whole assembly of God-Pleasers, St. Nicholas enjoys the special love of our Russian Orthodox people. Many churches were built in his honor, his very name is beloved by the Russian Orthodox, and therefore it is often encountered in Christian families.

Let us pray to him, that he would ask for spiritual gifts for us: humility, meekness, and love. Holy Father Nicholas, pray unto God for the salvation of our souls! Amen.

With the Saints Give Rest

Commemorating our departed ancestors in Christ today, it is timely for us to speak for our edification about…