The Second Theological Convention in the Patriarchate of Alexandria

Together with Archimandrite Elias Habib, the pastor of Archangels Church, I established the idea of convening a periodic theological conference. We felt that there is an urgent need for a public and influential voice for the Orthodox Church in a country like Egypt because of the massive challenges the country is facing.
Minas Monir | 10 June 2010

An Orthodox Christian Witness in a different culture 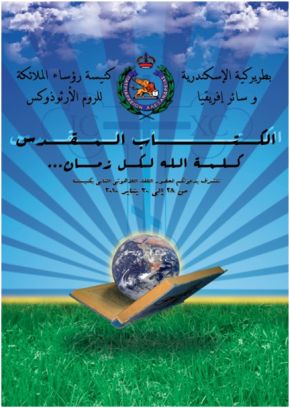 Under the title, “The Holy Scripture: the word of God for every age”, the Patriarchate of Alexandria and all Africa and the Holy Archangels Greek Orthodox Church in Cairo organized the Second Theological Convention in January 2010.  The objective was to be a living witness to the enlightening role of the Orthodox Church in the Middle East region, whether in the Antiochian Patriarchate or the Alexandrian one.

The Poster the Conference

Together with Archimandrite Elias Habib, the pastor of Archangels Church, I established the idea of convening a periodic theological conference.  We felt that there is an urgent need for a public and influential voice for the Orthodox Church in a country like Egypt because of the massive challenges the country is facing. There can never be an alternative to the Christian speech that is able to give a true face to tolerance, based on faith in Christ. The wounds of the Middle East region, and especially Egypt, cannot be cured with simple words of sympathy but only through a serious will for change and development.  Change needs a positive will that can respond and react to the needs of people.

To move forwards positively, we should start from principles and values. Today, a key problem in the Middle East in general is a crisis of coexistence between the different ethnic and religious communities. The reason is the lack of understanding the “other”. For example, Egypt suffers from sectarianism and religious violence. This theological convention took place just after a sectarian shooting in Southern Egypt. During this incident six Christians were shot and many were injured while they were coming out of a church after celebrating the Christmas feast liturgy.

Diplomacy and meetings alone cannot resolve this problem. Actually, they have proved to be a failure. Now, we – as Christians and Orthodox – should start handling our responsibility. This responsibility starts with awareness based on faith. Because ideology and religious fanaticism are part of the reason and motive of such violence in Egypt, then the Christian faith can be the origin for reconciliation and love. Declaring this faith, based on the word of God, and the Person who is the Word of God, i.e. Jesus Christ, is the starting point for mature steps towards spreading love and light. That was the point of departure for launching a campaign of publications and conferences emerging from our beloved Orthodox Church.

The aim is to acquaint Egyptians from different Christian confessions and even our Muslim partners in this country with the origin of our “love”, to give an answer to every man that asks you a reason of the hope that is in you with meekness and fear (1 Peter 3: 17). On the other hand, we need to know that “other” and more importantly understand him. Through the foundation of faith, we can move on towards reconciliation, coexistence and even unity.

Day 1: Christ is the living word of God

On that basis, a three day conference was established to gather different confessions around the table and to let them express their faith and relationship with the others. Fr. Elias and I started together designing the programme of the convention. The first day was about the living Word, Jesus the Logos. We invited two scholars: Dr. Fadi Georgi, professor of Dogmatics at St. John of Damascus Antiochian Orthodox School of Theology, and a prominent Roman Catholic scholar, Paul Feghali, professor of the Holy Scripture in Lebanon.

The word of Georgi was valuable. It was not simply a definition or explanation of Christ’s identity but it was questioning how to deliver such an identity the believers, as well as how to print Christ’s image on them so they become Christ-like persons. This is exactly the Church’s role; to bring forth Christ-like people.

The message from this day is clear; all Christendom confesses that Jesus is the Word of God, and He is the way. In the presence of al-Azhar (the highest Islamic religious foundation in Egypt) Sheikhs, different denominations and people of the parish, there was a voice calling for declaring that Christ is the Alpha and Omega, the beginning of Christian message and its goal.

Ecumenical dialogue and cooperation is an Orthodox Christian duty, there is no compromise coming out of a reciprocal agreement on common basis. Declaring it in a Muslim majority region is a crucial issue. Coexistence and cooperation doesn’t require any kind of compromise or change but it glorifies confessional mission and witness to the church’s own faith.

How beautiful it was to see the first day as a feast where people gathered around Christ, the bridegroom and the Lord of the house. It set the tone for the remaining days of the Convention as one of dialogue, which offered a place for scholars from Greece and Lebanon, as well as politicians, to speak about the role of the church and its message, preserved in the word of God which is “for every age”.