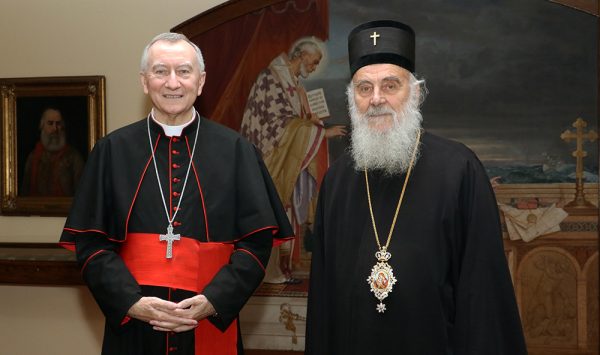 His Eminence thanked His Holiness for the cordial reception, during which a discussion was held on numerous topics concerning the  life of the two Churches. Patriarch Irinej expressed his gratitude to Cardinal Parolin for the  visit and a message of Pope Francis of Rome as well as for the official position of the Vatican which prefers  dialogue between Belgrade and Pristina to an unilateral recognition of an independence of the southern Serbian province of Kosovo and Metohija.

The reception was attended by His Excellency Luciano Suriani, Apostolic Nuncio in Belgrade; His Eminence Porphirije, Metropolitan of Zagreb-Ljubljana; His Grace Bishop Irinej of Bachka; mons. Giovanni Gaspari, official of the State Secretariat of the Vatican; mons. Filipo Kolnago, First Secretary of the Nunciature; Revd. Aleksandar Ninkovic, associate of the Nunciature, and deacon Dr. Aleksandar Prascevic, head of the Serbian Patriarch’s Office.