Source: DECR
Natalya Mihailova | 24 September 2014
On September 22, 2014, the 13th plenary session of the Joint Commission for Theological Dialogue Between the Orthodox and the Roman-Catholic Churches completed its work, at Amman, Jordan. 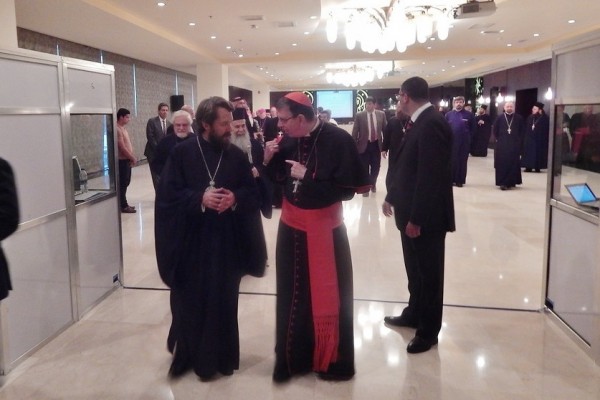 The meeting was attended by twenty three delegates from the Catholic side and representatives of the Orthodox Churches of Constantinople, Alexandria, Antioch, Jerusalem, Russia, Georgia, Serbia, Romania, Cyprus, Poland, Albania and the Czech Lands and Slovakia.

The Moscow Patriarchate delegation was headed by the chairman of the Department for External Church Relations, Metropolitan Hilarion of Volokolamsk. It included Hieromonk Stephan (Igumnov), DECR secretary for inter-Christian relations, and Rev. Alexy Dekarev, a DECR staff member. 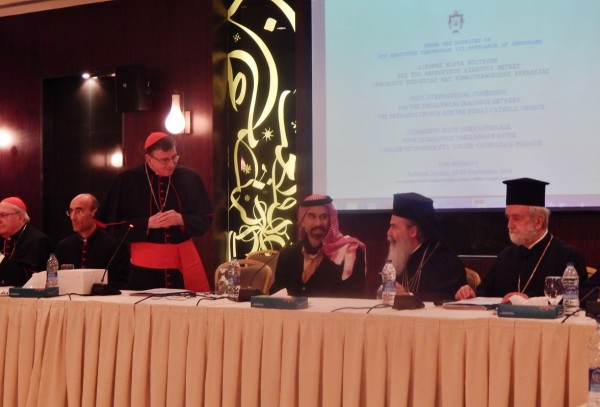 The Commission considered a draft document on “Synodality and Primacy” prepared by the Commission’s coordinating committee in 2012 in Paris. As the text aroused a number of fundamental objections, it was decided to prepare a new draft to be submitted to the current plenary session. A drafting committee was formed to prepare a new draft document entitled “Towards a Common Understanding of Synodality and Primacy in the Church in the First Millennium”. After prolonged discussions, which revealed serious disagreements on the problem of primacy in the Church, it was recommended that the Joint Commission’s coordinating committee have the text improved by its meeting to be convened in 2015. 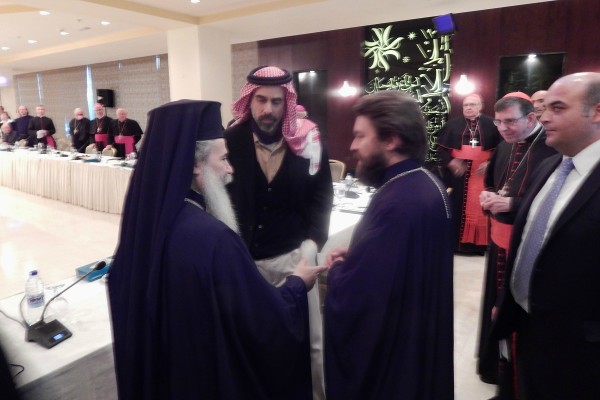 In the discussion on synodality and primacy in the Church, criticism was expressed with regard to the document “Ecclesiological and Canonical Consequences of the Sacramental Nature of the Church” adopted by the Joint Commission on October 13, 2007, in Ravenna. Metropolitan Hilarion underlined in particular that this document had found no consensus among Orthodox Churches since it had been adopted in the absence of representatives of the Russian Church whose critical remarks to the text made at various stages of its drafting were ignored. Metropolitan Theodore of Akhaltsikhe stated that the Georgian Church rejected the document.

The final meeting of the plenary session was honoured by a visit of His Beatitude Patriarch Theophilos III of Jerusalem and All Palestine and Prince Ghazi bin Muhammad, a member of the Kingdom of Jordan’s ruling dynasty and King Abdullah’ adviser on religious affairs. The co-chairmen of the Joint Commission, Cardinal Kurt Koch and Metropolitan John of Pergamon (Patriarchate of Constantinople), speaking on behalf of the Orthodox-Catholic dialogue members, thanked his Highness and, in his person, King Abdullah II for their assistance in organizing the plenary session in Amman and for their hospitality.

The session adopted a joint communiqué in which the Joint Commission pointed to the grave situation of Christians in the Middle East and called for immediate release of all the hostages including Metropolitans Paul of Aleppo (Patriarchate of Antioch) and Mar Gregory Ibrahim (Syrian Orthodox Church), and for immediate cessation of bloodshed and restoration of peace in the Middle East. 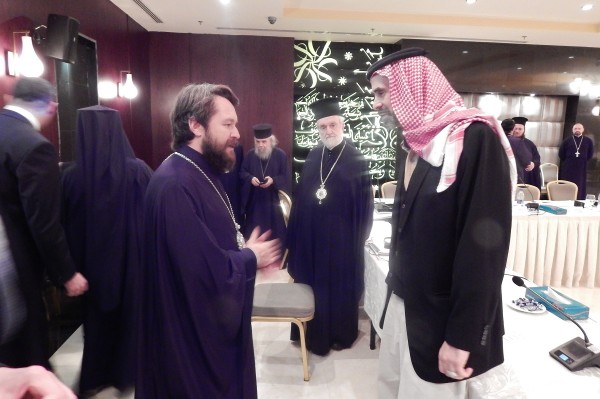 After the final session, Metropolitan Hilarion had a brief talk with Prince Ghazi bin Muhammad, who spoke about the plans for further development of the territory on the Jordan River bank, where various Christian confession are establishing pilgrims centers. Metropolitan Hilarion thanked the prince for his attention to the project and spoke about his visit to the pilgrims center of the Russian Orthodox Church. Participating in the talk was His Beatitude Theophilos, Patriarch of Jerusalem.