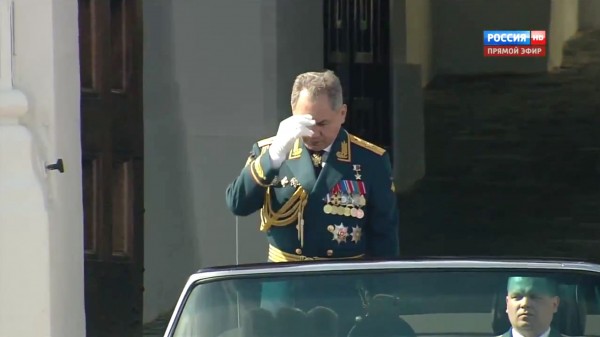 Russia's Defence Ministry Sergei Shoigu making the sign of the Cross before the beginning the Victory Day parade in Red Square in Moscow, 2015.

I was in a small town in Cyprus. I was inside an ancient monastic chapel off a cobbled street. Tourists were passing by, curious as always, with their omnipresent cameras at the ready to snap a photo of whatever seems interesting, whether or not they grasp what it might be. A Divine Liturgy was taking place, the Byzantine chanting loud enough to catch the attention of the passersby. A man stood at the entrance. He was a layman, swarthy and rather portly. His duty was to see that the services would not be disturbed by the curious who had little interest in the worship, were dressed in shorts and cutoffs, and just wanted to gaze around, snap a photo and go on to hunt for the next bizarre and exotic sight to capture with the camera’s eye.

A young woman, not more than a teenager and obviously an American tourist by her dress, appeared at the portal and attempted to enter. The doorkeeper raised his arm to block her entry. He flicked his fingers in the signal to keep on her way. She made a finger steeple. He was not impressed. “But I am Orthodox,” she protested. He glared at her. She was explaining in sign language that despite her camera, she wanted to go inside to pray. He looked intently at her and in a low, guttural voice said:“Make cross.”

“Pardon me?” she whispered. He rasped a bit louder in broken English,“You make cross.” This time the girl understood. She bunched her thumb with pointer and tall finger of her right hand and touched first her forehead, then her chest, right shoulder and the left, without flexing her wrist. “N’daxi,” said the porter. “Sorry?” she queried. “Is OK. Go inside,”he waved, and stood aside to permit her to pass.

Orthodox Christians are a disparate amalgamation of persons and personalities. So many lands and languages, backgrounds and personal traits, yet we all form the fingers of our right hands the same way and do the same sign of commitment to Christ and His cross. Different from those western Christians who also make the sign of the cross left to right, but our tradition is to mirror the blessings that we receive from the bishop or priest. That in itself displays a basic difference between Orthodox Christians and Christians of the west, especially Roman Catholics. We in the naves of the church do what the clergy do when facing us. We receive the blessing. Even if we say that we bless ourselves, we actually return the blessing that comes from Jesus Christ through the bishop or priest.

Beyond that identical action the times of blessing ourselves and the number of times we do so varies from one ethos to another. The Russian tradition is to approach an icon by crossing oneself and making a bow, then the same ritual once more, kissing the icon [some even nearly touch the icon with the forehead] and then a third time cross and bow. Upon leaving the sacred space one will turn and face east, the place of the holy altar, crossing and bowing three times before turning to leave. Most of us cross ourselves whenever we drive or walk past an Orthodox church or enter a cemetery. In the Old World, especially in Slav lands, upon entering a home or apartment one looks for the “Beautiful corner” where icons are displayed, first bowing in that direction and crossing oneself, then greeting the hosts. At least that was the traditional norm.

Customs vary. Well-bred Orthodox Christians from the orient will never sit in a church with their legs crossed. [In most churches outside of North America there’s nowhere to sit anyway.] But crossed legs are called the “upside down cross.”

When and how we make the cross sign may vary; nevertheless, that we do so and the manner in which we do is the universal sign that we belong to Jesus Christ and as such, to one another.