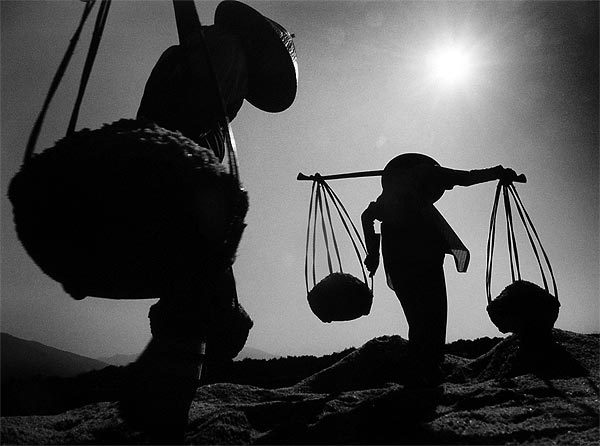 I have frequently heard it said that God never gives us more than we can bear. I disagree with this statement. In my own experience, God has frequently burdened me with circumstances far beyond my strength and ability.

I think, for example, of the first funeral I ever served. I was asked to bury an Eritrean man who had committed suicide, leaving behind his wife (who had been living in Canada only two months at the time) and a two-year-old daughter.

I remember clearly standing at the graveside, facing two hundred members of Calgary’s Eritrean community, all of them wailing and ululating in true African fashion. I remember the man’s widow, so distraught that she could not stand, being half-carried, half-dragged to the edge of the grave by two female relatives. I remember having to preach through an interpreter, and using my pastoral authority to make the widow eat something after eight days of self-starvation. I remember these things and I again must say: God frequently gives us tasks that lie well beyond our strength, ability and experience. Indeed, such situations are the very places where we discover the meaning of the spiritual life.

The Old Testament offers plentiful examples of the overwhelming tasks that God often sets for His people. Consider Moses, a murderer and a coward who was “slow of speech and slow of tongue,” (Exodus 4:10) but whom God nevertheless called to free His people from bondage to the Egyptians and lead them to the Promised Land. Consider David, a boy who faced a fully armed Goliath with nothing but a sling and five pebbles. Consider the disciples asked to feed the five thousand with five loaves and two fish.

But of all the occasions on which God gave His servants more than they could bear, my favourite is the story of Gideon.

In the time following the conquest of the Promised Land under Joshua, Israel regularly fell prey to invading tribes, who were understood as God’s punishment for the people’s infidelity. On one such occasion, the land was conquered by the Midianites, who threatened to destroy the entire land. (Judges 6) To lead an army against this enemy, God sent an angel to Gideon, greeting him as a “mighty man of valour!” (Judges 6:12) When Gideon protested that he was the least of the weakest clan of the lowest tribe of Israel, God replies, “Surely I will be with you, and you shall defeat the Midianites as one man.” (Exodus 6:16)

Once Gideon had assembled his army of 32,000 men, God (as it were) added insult to injury. He commanded Gideon to permit anyone in the army to leave if they were afraid. 22,000 men departed. Then, through a rather strange test, God whittled the army down even further, so that in the end, Gideon was left with only three hundred men. Finally, God asked Gideon to attack the Midianite camp armed only with trumpets, pitchers, and torches. The result was miraculous: terrified by an earlier dream prophesying their defeat, the Midianites believed that their adversary was far greater than he really was, and fled in a panic.

The key in this entire story, in my opinion, is the reason God gave for reducing Gideon’s army, which was ultimately the same reason He chose Gideon in the first place: “The people who are with you are too many for Me to give the Midianites into their hands, lest Israel claim glory for itself against Me, saying, ‘My own hand has saved me.’” (Judges 7:2)

The point is clear: as with Gideon, God gives us greater challenges than we are able to meet precisely so that we are unable to trust in our own strength, and must therefore seek His help. After all, if He never gave us more than we could bear, we would never need Him, and therefore could not relate to Him as God.

The question is, though, how do we deal with these situations? Again, the purveyors of platitudes remind us to “do the best that you can with what God has given you.” And once again, I must disagree. How can my best effort be sufficient for a task that is by definition beyond my capacity to handle? And besides, how often do we really “do the best we can,” anyway? In reality, we almost never operate at 100% efficiency. Committing to “do the best I can” is simply setting ourselves up for failure.

The task involved when faced with our “Gideon situations” is threefold, and well expressed in the language of the Twelve Step program:

1. Admit you are powerless over that situation.
2. Come to believe that a power greater than yourself can restore you to sanity.
3. Turn over your will and your life to the care of God.

I would add a fourth step in the process: when confronted with Gideon situations: do whatever the present moment allows you. Don’t be unrealistic in your expectations of yourself, committing to “do your best” and then beating yourself up forever afterwards, wondering if you could have done better. Just try to stay as fully present as you can, and commit the resources before you to the task at hand.

Gideon could have done his best with 32,000 warriors (and no doubt he would have failed against an adversary that was too numerous to be counted). God, however, gave him only three hundred men, and because he was obedient to what God gave, Gideon triumphed. So too is it with us. Whatever resources God gives us to work with in each moment is all that is required in that moment. Perhaps it’s not our best and perhaps we could do better, but whatever we have and whatever we give is all that God needs to accomplish on our behalf both the miracles and triumphs of our lives.