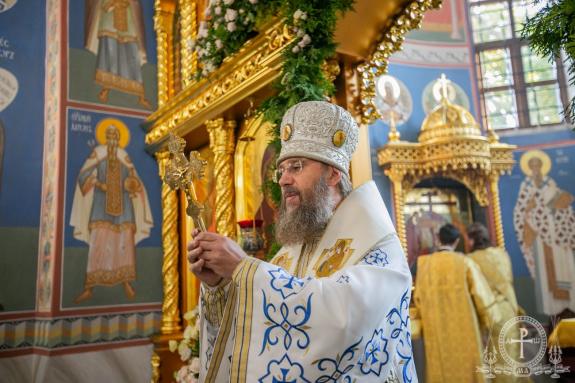 – In the Church everything is so wisely organized that desired answers can be found on the surface. This Sunday in churches we listened to a passage from the Gospel, to which we should pay special attention in anticipation of future events. The words of the Scripture are relevant and prophetic. They contain the answers to our questions:

“So it was, as the multitude pressed about Him to hear the word of God, that He stood by the Lake of Gennesaret, and saw two boats standing by the lake; but the fishermen had gone from them and were washing their nets. Then He got into one of the boats, which was Simon’s, and asked him to put out a little from the land. And He sat down and taught the multitudes from the boat”.

The passage from the Gospel of Luke, read this Sunday in Orthodox churches, tells us about a miracle, revealed by Christ to His disciples.

Since the Gospel was written by the Apostles after the completion of the earthly path of the Savior, it tells us not only about a specific historical event, but also refers us to future events. Every line of the Gospel is invisibly connected to their reader, directly applies to everyone, and tells us about what is going on around us.

“When He had stopped speaking, He said to Simon, “Launch out into the deep and let down your nets for a catch.” But Simon answered and said to Him, “Master, we have toiled all night and caught nothing; nevertheless at Your word I will let down the net.” And when they had done this, they caught a great number of fish, and their net was breaking. So they signaled to their partners in the other boat to come and help them. And they came and filled both the boats, so that they began to sink”.

What do we see here? With the help of a wonderful catch, Lord points His disciples to their future ministry: Apostolic preaching, and teaches them to trust Him. The Apostolic mission is compared to fishing, and the big catch symbolizes a great number of people, who will become the followers of Christ’s disciples.

“When Simon Peter saw it, he fell down at Jesus’ knees, saying, “Depart from me, for I am a sinful man, O Lord!” For he and all who were with him were astonished at the catch of fish which they had taken; and so also were James and John, the sons of Zebedee, who were partners with Simon. And Jesus said to Simon, “Do not be afraid. From now on you will catch men.” So when they had bought their boats to land, they forsook all and followed Him”.

The Apostle Peter, seeing the number of fish caught, was afraid and asked Lord to forsake the boat. Terror seized him and everyone with him. But then we see a miracle, a miracle of transfiguration: Peter copes with his fear, trusts the Savior and follows Him willingly and absolutely consciously.

Nobody forces him, he makes his own choice: to follow Christ.

This passage reminds us of a very important thing that many may have forgotten about: the point of the Christian mission. Its path is honest, free, and open. The Apostolic ministry has never been based on lies, deceit, suppression by authority, or intimidation. The Church has never forced anyone to follow Christ, it is a conscious choice and step for everyone. And misunderstanding of this fundamental principle leads to terrible distortions in people’s minds. Christ gave Peter a choice: to follow Him or not. He gives this choice to everyone.

He tells us, “Do not be afraid”, but we choose to trust Him at our own will.

This Gospel passage is addressed to everyone for comprehension: where and who we follow.

The path of the true Apostolic mission cannot be confused with anything. Guided by God’s spirit, it brings us out of the darkness, fears, it unites, transforms, and saves us.

The spirit of darkness operates in a deceptive way: it offers a false mission based on division and submission. Lost souls, which have fallen into the hands of tempters, risk their eternity by becoming toys in the hands of manipulators.

Each new era gives its own special cross. Today’s trials allow us to understand the power of God. For only then is God understood, when a person realizes all their weaknesses and impotence in the struggle against temptations and trials. Lord withholds His power for a time, allowing a person to feel it, and only then manifests Himself.

Thus, a person learns humility, begins to expect the help of God.

Only in temptations a person acquires a firm faith and courage.

If we humbly accept the will of God and patiently submit to God, He Himself will lead us to light.