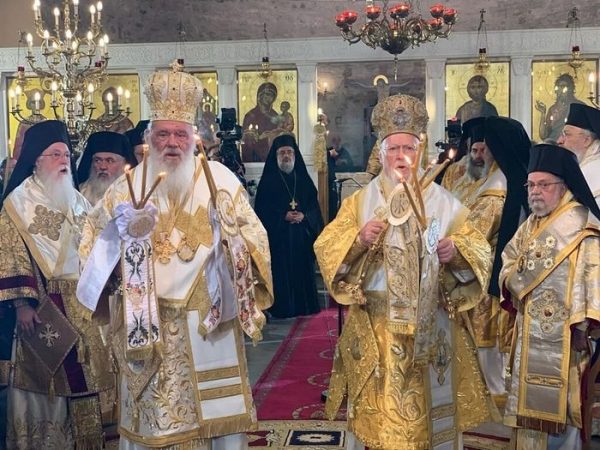 Archbishop Ieronymos of Athens and All Greece and Patriarch Bartholomew of Constantinople concelebrated the Divine Liturgy in Thessaloniki today together with a number of hierarchs from their respective Local Churches.

Most significantly, “Metropolitan” Epiphany Dumenko, the primate of the schismatic “Orthodox Church of Ukraine,” created by Pat. Bartholomew and ex-President Petro Poroshenko of Ukraine, was commemorated in the service as a primate of a Local Church.

Several hierarchs of the Greek Church, most notably His Eminence Metropolitan Seraphim of Kythira, had urged Abp. Ieronymos to avoid the threat of a schism in the Greek Church by not attending the Liturgy and not commemorating Epiphany.

Pat. Bartholomew thanked Abp. Ieronymos for recognizing the OCU and thereby standing by the Patriarchate of Constantinople. Several hierarchs of the Greek Church argued at last Saturday’s session of the Bishops’ Council that they had to recognize the OCU out of solidarity with their fellow Greek, Pat. Bartholomew, and to stand up to supposed “Russian aggression.”

The Greek outlets vimaorthodoxias.gr, orthodoxia.info, the Orthodoxia News Agency, and Orthodox Times (the English version of Romfea) also report that Epiphany was commemorated.

The Russian Holy Synod announced on Thursday that it authorized His Holiness Patriarch Kirill to cease commemorating Abp. Ieronymos in the event that he begins to commemorate Epiphany. However, the Russian Church intends to maintain communion with the Greek Church through those hierarchs who stand for Orthodoxy and continue to resist the lawlessness of Constantinople.