Hierarch of the Church of Jerusalem: We Pray for the Unity of Orthodoxy in Ukraine – in the Canonical Church 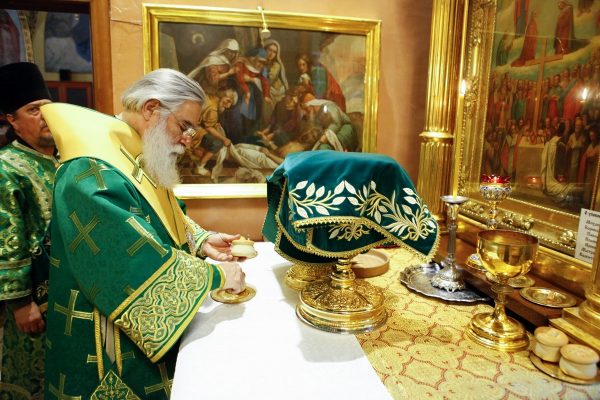 “We are hurt by what is going on in Ukraine, we pray for the unity of Orthodoxy but for the right unity, the unity in the canonical Church. We wish that the Ukrainian Orthodox Church could continue her salvific journey without political obstacles”, said Metropolitan Timotheos of Vostrol (Patriarchate of Jerusalem) after the Divine Liturgy he celebrated on June 27, 2019, at the Pochayev Monastery of the Dormition.

“You are in the right ark”, he stressed addressing the faithful of the Ukrainian Orthodox Church and invoking on them the Lord’s blessing for their faithfulness to the Orthodox Church under the spiritual guidance of His Beatitude Metropolitan Onufry.

“I have come from the Holy Land with a blessing of His Beatitude Theophilos, Patriarch of the Holy City of Jerusalem and All Palestine, to take part in celebrating the name day of His Beatitude Onufry, Metropolitan of Kiev and All Ukraine, who is the canonical hierarch and pastor of Ukraine. I have come to share the joy of the God-preserved flock, all the Ukrainians, who are faithful children precisely of the canonical Church”, he noted.

The archpastor underscored how important it was to stay in the fold of a true Orthodox Church. “For me, it is a special honour to lift up together with you our prayers to the Lord for peace in the Church. I feel the special grace of the Mother of God Who is always present here and blesses all those who come here to venerate Her holy image”, His Eminence said, “We should thank God for being in a canonical Orthodox Church, for in it the grace of the Holy Spirit works and the Mother of God protects all the faithful”.

Metropolitan Timotheos also said that in Jerusalem and throughout the Holy Land people are praying to the Mother of God for peace in the world and peace in the Church.

He reminded the congregation that with faith any hardship can be overcome: “With the coming of hard times the faith of each one of us is tested. And those who remain faithful to the Church of Christ are called confessors. Despite all the hardships and sometimes persecution, if our faith in Christ is firm, we will remain where we should – in the Church”.

Metropolitan Timotheos conveyed to the congregation and especially to the brethren of the Pochayev Monastery a blessing from the Patriarch of Jerusalem and All Palestine.

“Patriarchs of Jerusalem, in hard times when the unia sought to subject Orthodoxy in Western Ukraine, came here despite great difficulties and even dangers to their lives in order to support people by word and not only by word. They consecrated bishops so that Orthodoxy could be asserted in Western Ukraine. And I dare say that thanks to Patriarch Theophanes (in the 17th cent. – ed.) hierarchy has been preserved in Ukraine. It is not a sermon against other Christian believers; on the contrary, the Orthodox Church has always had to defend herself against the attack of adherents to different creed. And we in the Middle East are experiencing many difficulties but we believe that you, our brothers – hierarchy, clergy and laity, are lifting up prayers for us as well”, he said.

Most viewed articles
Blasphemous and Obsessive Thoughts Come Into My Mind. What Do I Do?154
An Extraordinary Session of the ROCOR Synod of Bishops Convenes113
Funeral Services for His Eminence Metropolitan Hilarion of Eastern America and New York79
Is God a Fool?73
How to Respond to Opposition to the Gospel56
Metropolitan Joseph, Bishop Thomas Celebrate Centennial of Little Falls Parish55
A Piece of Rock Falls Down on the Skete of St. Anna on Mt. Athos43
PRAY: 14 Students, One Teacher Dead After Texas Elementary School Shooting41
His Beatitude Metropolitan Tikhon Issues Statement on Tragic School Shooting in Texas29
Most popular authors
Pravmir.com team235
Fr. Eugene Murzin154
Archpriest Stephen Freeman73
Archpriest Basil Ross Aden56
Subdn. Peter Samore55
Associated Press41
Metropolitan Tikhon of All America and Canada29