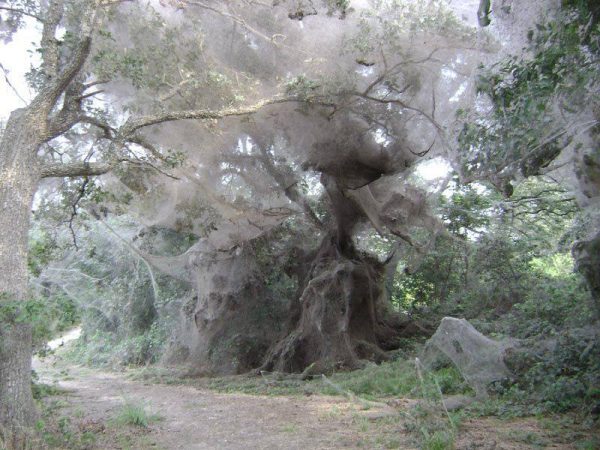 Sir Walter Scott (1808) famously wrote: “O what a tangled web we weave, when first we practice to deceive.” A modern pundit has rephrased it: “Always tell the truth…it’s easier to remember.”

Lies inevitably create a web of false narratives. In many ways, it’s a metaphor for sin itself. Sin begets sin that begets sin and the web ensnares us into a world of un-truth. A single thread of a spider’s web is tiny and weak. However, the combination of hundreds of such threads works to effectively hold its prey.

The odd “nature” of evil is that it is nothing. Evil has no being. Only God can give anything the gift of being. All that God has created is, thus, inherently good in its nature. Evil, according to the Fathers, is a parasite, a distortion of the good, a mis-direction. Every lie shares this aspect of nothingness (it is even less than a strand of spider-silk). Nevertheless, lies, taken together, have a way of weaving a false reality.

If we pay attention to the web of lies through time, it becomes apparent that the “narrative reality” of our world is largely one of make-believe. Of course, if enough people believe the make-believe, it adds a greater heft to the “nothingness” around us (as paradoxical as that might be). As much as our lives are caught-up in the narrative reality of our culture, we struggle like flies caught in a spider’s web.

Fortunately, there’s a world of difference between a culture’s narrative-reality and the actual world itself. Trees do not lie. The ground does not lie. Spiders’ Webs do not lie. The rocks speak the truth. Of course, the narrative about these things can be as false as any lie. This distinction between the world-as-truth and the narrative-as-lie can be very helpful in thinking through the Christian life.

When this statement is compared to John 3:16 (“For God so loved the world that He gave His beloved Son…”) it is easy for some to become confused. “God so loves the world…” but “if anyone loves the world, the love of the Father is not in him…” Which is it? The answer is found in the use of the word, “world,” for it’s doing double duty. In John 3:16, “world” refers to all the people of the earth. In 1 John 2, “world” is describing the “narrative-reality” and the somewhat demonic, unseen structures they create that govern our lives. Context is required.

The Epistle of St. James uses even stronger language than St. John in condemning the sinful “web-world”:

“Adulterers and adulteresses! Do you not know that friendship with the world is enmity with God? Whoever therefore wants to be a friend of the world makes himself an enemy of God.” (James 4:4)

He is not addressing literal “adulterers and adulteresses.” Instead, he is declaring that our friendship with the dark powers and forces of the “world” and its false narratives draws us away from the singleness of our loyalty to God. We become spiritual adulterers. It is something that comes to mind when I hear voices that suggest that we should be in “dialog” with secularity – that the life and teaching of the Church should consider various accommodations to modernity (as a false narrative).

None of this suggests that we should live in fear, nor that we abandon the love of every human being. It is, instead, a reality check that calls us to understand the nature of what is around us, as well as the position of the gospel within it. Classically, we are taught to be “in the world” (in the best sense of the word), but not “of the world” (in the worst sense of the word).

The tangled web of lies that constitutes much of our culture has a way of drawing us from the love of Christ. For example, I have written repeatedly about the modern narrative of “making the world a better place.” It has been a slogan, in one form or another, of virtually every program of mass murder in modern history. I have written carefully about it because it is among the more pervasive and widely accepted lies in the web that binds us. It provides cover for vast amounts of human activity in which we imagine ourselves to be doing “good” – but do so by false measures and in the service of a false vision. We have never been commanded to “make the world better.” Only God knows what would constitute “better.” We are commanded to do “good,” as measured by the teachings of the gospel.

The flat truth of the matter is that the web of lies that surrounds us is not going to improve. Nowhere in the Scriptures is it suggested that this aspect of our lives and their context will change. Indeed, the Scriptures indicate that the trend is in the other direction:

“But know this, that in the last days perilous times will come: For men will be lovers of themselves, lovers of money, boasters, proud, blasphemers, disobedient to parents, unthankful, unholy, unloving, unforgiving, slanderers, without self-control, brutal, despisers of good, traitors, headstrong, haughty, lovers of pleasure rather than lovers of God, having a form of godliness but denying its power. And from such people turn away!” (2 Timothy 3:1–5)

These “perilous times,” it should be noted, are constituted by human behaviors. It is in the web of those behaviors, in the lies we tell ourselves and each other, that danger is present for our souls. Nothing about the world (the factual world of God’s creation) itself has changed. The trees, rocks, and everything around us remains good. It is a reason that I urge people to pay attention to what is close at hand, doing “the next good thing.” The things that are at a distance are, as often as not, relayed to us through false narratives, distorted. The “news,” for example, is almost never “news.” It is a story told to us with a purpose, and the purpose is always more than relaying information.

Christ did not, and has not abandoned us to the powers of this “world.” He gave us to one another in the fullness of the life of the Church. There, we are told to “speak the truth in love.” Few things could be more essential to the life of a Christian. We do not ask, “Where is my place in the narrative structures of this world?” There will come a day when everything that is not of the truth (born of God) will be swept away in its nothingness. Only that which has true being will remain. That will be the nature of judgment.

As we move towards the great feast of the Mother of God’s Falling Asleep (Dormition), this verse from her Akathist comes to mind:

I close with these words of St. Paul – true then – true now:

See then that you walk circumspectly, not as fools but as wise, redeeming the time, because the days are evil. Therefore do not be unwise, but understand what the will of the Lord is. (Eph 5:15-17)