The Truth of Pascha

A friend gave me a striking comparison the other day. Do you know how the police and investigators learn how to spot counterfeit bills? They meticulously study every aspect of genuine currency. They take the measure of every real bill – they immerse themselves in the truth, so that it becomes second nature. This means that when they’re confronted with a fake, they can immediately spot all the ways in which it is faulty. This is why it is so important to immerse yourself in the Truth. Otherwise, you’re easy prey for deception.
Douglas Cramer | 21 April 2009

I’ve recently been spending time with an old college roommate, a man dying of cancer in his 30’s. He’s not Christian, not married, has no children. We spend a lot of time talking about death. “What do you believe happens when we die?”, my friend asked unprompted one afternoon as we sat outside his home. “You know I’m a Christian,” I answered. “This is what I believe.” And I talked about the Resurrection, about how I believe the truth is that we are created for life, body and soul. That death is not the end. That we are called to live, to live the life of the New Man.

This is what I believe. This is what I know. Death is not our end. I know that this is true. In the Gospel of John, we read Jesus Christ’s words to Pontius Pilate before His crucifixion: “For this cause I have come into the world, that I should bear witness to the truth. Everyone who is of the truth hears My voice.” And Pilate answers: “What is truth?”

What is truth? What is falsehood? These are the questions we all need to ask. What do you believe to be true? If a dying man with no knowledge of God asked you what you believe about death, what would you say? God wants us to have an answer. He wants us to know that there is Truth. “Everyone who is of the truth hears My voice,” Christ teaches.

Questions of truth are crucial when we consider writings like the so-called “Gospel of Judas”, an ancient heretical text which has made headlines. The Church has had a response to these kinds of ancient texts for two thousand years. The early Church selected the books it would include in the Scriptures, and left to the side vast amounts of writing that they as the direct descendants of the Apostles understood to be faulty.

Yet still, so many people are fascinated and seem to believe they’re uncovering something true that has been hidden from them. Ancient secret texts that question authority – we’ve all got a deeply rebellious, curious, skeptical streak that rises up at the prospect of uncovering a secret. But reality is different. The reality is that the Church isn’t trying to hide the Truth. The Church is trying to reveal the Truth. And the Truth of Christ as revealed in the Four Gospels is vastly more powerful, profound, and provocative than the so-called secrets of long-rejected ancient writings.

A friend gave me a striking comparison the other day. Do you know how the police and investigators learn how to spot counterfeit bills? They meticulously study every aspect of genuine currency. They take the measure of every real bill – they immerse themselves in the truth, so that it becomes second nature. This means that when they’re confronted with a fake, they can immediately spot all the ways in which it is faulty. This is why it is so important to immerse yourself in the Truth. Otherwise, you’re easy prey for deception. 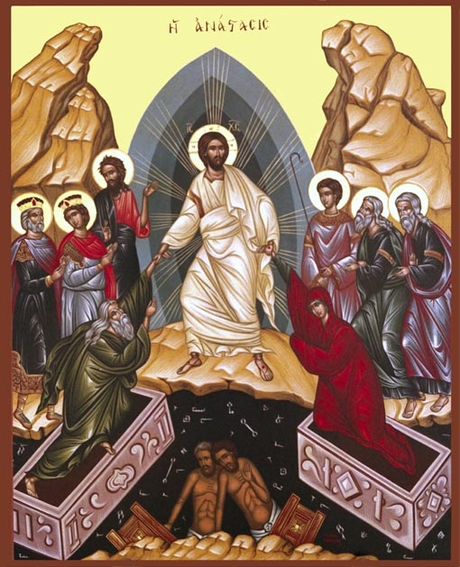 Each of us is called to ask, “What do I believe to be true?” Faith doesn’t require us to avoid asking questions. We must question what we believe. Even more, we must find answers. Consider St. Paul’s words to the Corinthians (1 Cor. 15:12-19):

Without Christ, death reigns. Our relationships will die. Our goals will go unfulfilled. Our hopes will fail. We are abandoned. We are forgotten.

But this is not the truth! St. Paul continues: “But now Christ is risen from the dead, and has become the firstfruits of those who have fallen asleep. For since by man came death, by Man also came the resurrection of the dead. For as in Adam all die, even so in Christ all shall be made alive.”

This is the New Man.

On Pascha, we will proclaim, “Christ is Risen!”

But will we believe it? Is it the truth?

“For as in Adam all die, even so in Christ all shall be made alive.”

St. Paul teaches us in his Epistle to the Colossians that we must “put off the old man … and put on the new man who is renewed.” For anyone hungering for a hidden truth, a truth that is unknown to most, here it is – in Adam all die, in Christ all live. This Truth is hidden in plain sight – with us, in the worship of the Orthodox Christian Church. It is nothing less than the answer to life.

God created us for life. He created us to receive His life. In our sin we turned from Him, and death entered the world. But He does not allow it to be the final answer.

So often Holy Week is considered one of the “beautiful traditions” or “customs,” a self-evident “part” of our calendar. We take it for granted and enjoy it as a cherished annual event which we have “observed” since childhood, we admire the beauty of its services, the pageantry of its rites and, last but not least, we like the fuss about the paschal table. And then, when all this is done we resume our normal life. But do we understand that when the world rejected its Savior, when Jesus . . . died on the Cross, “normal life” came to its end and is no longer possible. For there were “normal” men who . . . killed Him precisely because He was troubling their normal life. It was indeed a perfectly “normal” world which preferred darkness and death to light and life. . . . Pascha means passover, passage. . . . And Christ was the fulfillment of Pascha. He performed the ultimate passage: from death into life, from this “old world” into the new world into the new time of the Kingdom. And he opened the possibility of this passage to us. . . . We must also perform our own passage, we must condemn the old Adam in us, we must put on Christ in the baptismal death and have our true life hidden in God with Christ, in the “world to come. . . . And thus Easter is not an annual commemoration, solemn and beautiful, of a past event. It is . . . announcing the Beginning of the new life.

Life is God’s answer to the old man. Christ entered the tomb. And He came forth again. He trampled down death by death. He is the firstfruits of the dead. He is the first new man. The True, New Man.

As we sing on Good Friday: “Hades . . . trembled with fear. Its locks were shattered; its doors broken; the tombs were opened; and the dead awoke. . . . O Christ, you closed the chambers of death and hades, and demolished all its kingdoms.”

This is God’s word to us – “In Christ all shall be made alive.” He offers us the life of the New Man, the New Adam. Christ lives. Christ is life. Life for us. Our faith is not empty. Our faith is not futile. We will not perish. We do not hope in vain. If this is what you want, reach forth and claim it. Claim the new life that Christ offers you.

This is the truth. Truth is a Person. A Person who shows that death is not the final answer. A Person who wants us to act with truth, goodness and beauty. May we all rejoice in the Risen Christ.

This reflection is adapted from a speech originally written for Fr. Christopher Metropulos of St. Demetrios Greek Orthodox Cathedral of Ft. Lauderdale, FL, and SCOBA’s Orthodox Christian Network. Learn more about the powerful ministries of OCN on their website, www.myocn.net.