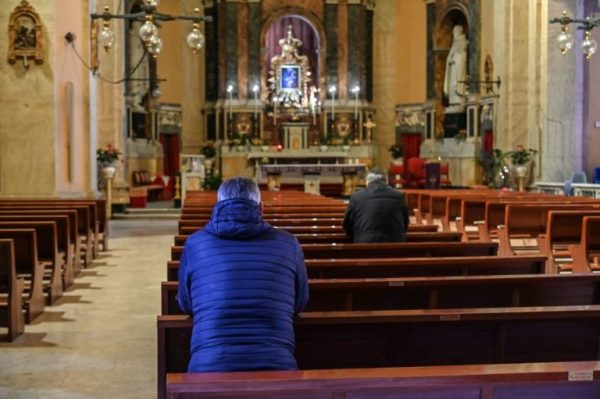 The Holy Synod of Constantinople, convened under Ecumenical Patriarch Bartholomew, recommended that “all the faithful adhere to the official directives of both the World Health Organization and the pertinent pronouncements and legal regulations issued by the civil authorities of their respective countries.” For the USA and much of Europe and beyond this meant a total shutdown of Lenten services.

My mind was completely blown. When was the last time this happened? Had it ever happened? Has the Orthodox Church ever closed its services for an entire Lenten season? It never would have occurred to me to even ask the question prior to a couple weeks ago (as it turns out, this last happened during the bubonic plague of the 14th century).

My initial reaction was that this was nonsense; that Christians, particularly during the Lenten season, should not allow sickness to sideline them from communion; that we were effectively canceling Christ’s resurrection out of fear; that we were all treating our communion in Christ’s death and resurrection as something optional, something to do when things were peaceful and safe. I could not help but think that this was hypocrisy, since we consider spiritual illness worse than physical illness. Shut the doors to God’s faithful during Lent? Have we lost our minds?!?!

I know it sounds dramatic, but this was literally how my mind was processing the information as it came in by the second (it’s not always wise or safe to let others in on your private self-talk, but there it is).

After some reflection, it dawned on me that I was reacting from a mindset informed by my old Word of Faith-Evangelical upbringing. Not to say that there aren’t Orthodox with the same mindset, but it’s the exception rather than the rule. As a WoF-Evangelical I understood all illness was of the devil, and was to be conquer through faith. If a Christian was unable to conquer it then clearly it was due to lack of faith. The only other option was that God was responsible – that the illness served His divine judgement – and hence, still an issue of lack of faith. For many reasons that I won’t get into here, the Orthodox have for 2 millennia resisted the urge to slide down this theological cliff, and have instead developed a robust view of illness and a profound understanding of death, far deeper than anything I was acquainted with during my time as an Evangelical.

But there was something else. As an Orthodox I find a bit of pride in the fact that we are incapable of having Church without the gathering of the people. As an Evangelical it didn’t really matter if I attended a church service or if I watched via livestream. There’s nothing happening there which necessitates one’s presence: the center of the service is the tithe, the preaching of the word, and the praise and worship – all of which can be done online.

But the Orthodox Church, like other high-churches, requires an actual gathering. As Fr. Andrew Damick summarized well in a recent tweet: “Churches that are centered on the Eucharist as the early Church was understand this well. People cannot receive the Eucharist over livestream. Actual gathering is required.” A gathering is required because the Eucharist elements are real – are really the body and blood of Christ. They are not mere symbols of faith or taken for memorial sakes. Eucharist, as with all the sacraments, is a recreative event which requires physical participation by the believer. This sort of theology safeguards the faith from Gnosticism and other philosophies which would attempt to displace the body as nonessential, and reduce the faith to a list of mental exercises catered to the clever and the educated.

At first I was worried that canceling Lenten services and the Church’s participation in the Eucharist would set the psychological wheels in motion for the Orthodox Church to embrace the sort of reductionist faith described above. But this fear speaks to my own immaturity in the Orthodox faith. The idea that the ancient faith and her bedrock theology would somehow crumble due to a pandemic is comical. Christ did not say, “And the gates of hell will not prevail against it, unless there is a really, really bad plague someday.”

So, after a few weeks of thought and discussion with friends and family, here is where I’ve landed with this whole situation:

1.  The decision to cancel Lenten services to the public will achieve at least two things: (a) Obviously, it will save many lives, but it may also help protect believers from the temptation to put their faith in their faith (something I was well familiar with prior to Orthodoxy), instead of humbly seeking God and His mercy. (b) It will serve to grant a new orientation to many believers who have learned to take the divine services and the Eucharist for granted, as if it will always be there whenever we want it. Speaking for myself, I can’t remember a time when I have desired communion more in my life.

2.  Similar to the last point, a good friend of mine brought me to an interesting line of thought. When I explained some of my troubled thoughts he simply said, “This is a time of exile.” Indeed, we are not the first generation, and probably not the last, that will experience exile from the chalice. Perhaps this “exile” is exactly what many of us need at this time. Exile may be painful, but it seemed to work out for the best on many occasions for the apostles and saints.

3.  Finally, I’m struck by the realization that this event is anything but uncharted waters. As a matter of fact, it’s a familiar scene when compared to the very first Pascha. The original Passover event recorded in the book of Exodus, foreshadowing Pascha (“Pascha” comes from the Hebrew word for Passover – Pesach), began with God instructing his people to shelter in place while a plague ravished Egypt. To avoid the plague the Hebrews had to isolate from one another in their homes, alone without the ability to gather en mass; alone to work out their faith in fear and trembling. With this in mind I have stopped struggling with the idea of spending this Pascha in isolation as an attack on the faith; I’m finding rest in the thought that maybe it is a return to the very roots of the faith itself.