The works of the small Synaxis of the Primates have begun. The Message of the Holy and Great Council will be addressed today

Source: Basilica.ru
Natalya Mihailova | 17 June 2016
This morning, at 09.00 a.m., the Heads of Orthodox Churches arrived at the Monastery of Our Lady of Gonia, in Kolymbari, Crete, where they said a prayer in the opening of the small Synaxis, the last Sinaxis of the Primates previous to the Holy and Great Council. 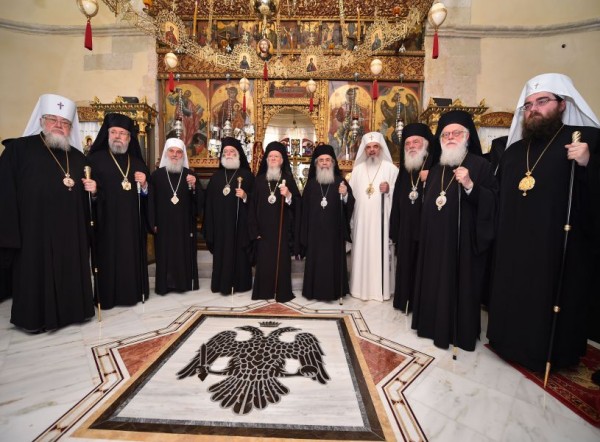 In this Synaxis participate the Primates and two hierarchs on behalf of each Autocephalous Orthodox Church. The works of the Synaxis will be carried out today and regard the analysis of the Message of the Holy and Great Council, the final communique which will be published at the end of the works of the Council.

His Eminence Iosif, Romanian Orthodox Metropolitan of Western and Southern Europe, stated that besides the Message, during the Synaxis the Primates will approach the absence of some Heads of Churches from the works of the Council.

The Message of the Council is very meaningful, somehow approaches the themes addressed by the Holy and Great Council and offers a message of hope. It expresses the desire for the unity, in Christ’s Church, of all Orthodox Christians, led of course by their hierarchs.

In an interview for the national television Kriti TV, His Eminence Emmanuel, Metropolitan of France, offered several explanations regarding the works of the Synaxis and the contents of the Message of the Holy and Great Council:

His Holiness will present today the Message to the Primates, who, by their authority, will approve it and bring amendments, in order to submit it further to the works of the Holy and Great Council.

The Message is a message to the world, and it is a message that will remain. This means it will be a historical text. Besides the other documents that will be approved by the Holy and Great Council, this will be a message addressing especially the world. First of all, we have to offer to the world a hope addressed to the 21st century man, something different that he expects to hear, and not what we intend to convey. I consider this an occasion to speak another language, to address the issues existing in the world today and exactly this thing will be described in the Message. Therefore, it will not repeat the subjects on the agenda of the Holy and Great Council.

In reference to the absence of the four Heads of Autocephalous Churches who decided not to participate in the works of the Council in Crete, Metropolitan Emmanuel said:

We hope always. Hope dies last. We hope that the absent Churches will finally come. And why would they not come? As I said yesterday, Orthodoxy is present here and calls everybody here. We do not set limits. We must show the unity of the Orthodox Church. This is the goal of the Holy and Great Council.

Finally, the Metropolitan of France said that the absent Churches are still present here, and are members of the Holy and Great Council.