The Year of our Lord

That we begin our reckoning of time with Christ’s birth is a fact which has long been but a mere convention for many. Seldom does one recall and recognize the great event from which we count time. So do we betray our ignorance and insensitivity. In ancient days, time was computed from the Incarnation of God the Word. It signifies that we live in a world which has been renewed and redeemed already, that even now we live in the realm of grace and already reckon the years of the new creature. Time itself has been illumined by the light which the darkness cannot consume. In a new and higher sense God is with us from that mysterious day forward, from that mysterious night in Bethlehem. “God was manifest in the flesh.” (I Tim. 3: 16) Since then we worship God who came down from heaven. 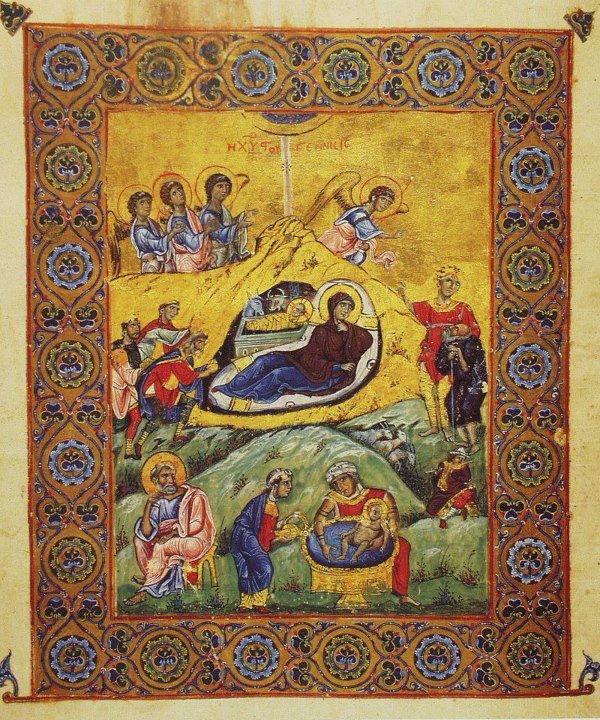 In the fullness of time God sent into the world his Son born of a woman. The Son of God became the Son of the Virgin. Here is the assurance and the beginning of salvation, the guarantee and source of eternal life. This is the reason for both, those on earth and those in heaven, to rejoice—the mystery of Godmanhood, the glory of the divine Incarnation. The kingdom of God then began and was truly revealed in history itself; in the meekness and humility of a simple life. The star of the eternal covenant stopped and shone over the cavern in Bethlehem. The humiliation of the cavern testifies that the kingdom then revealed is not of this world. Although it happened then, in the days of King Herod, in the city of Bethlehem, this “then” is, in the true sense of the word, an everlasting “now.” It was truly a beginning, the beginning of something new—of the Gospel history: It was then the New Covenant was revealed. The prophecies came true. 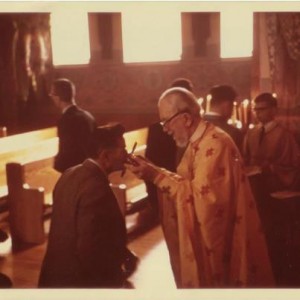 The divine descent is not only divine condescension, but at the same time it is the revelation of glory. Then was human nature healed through the ineffable divine assumption, and was reintroduced into communion with everlasting life. The action of grace reentered the world where it had been stopped by human sin. “Christ is born and earth and heaven are united: today God came down to earth, and man ascended into heaven.” From now on human nature is inseparably united with the Godhead in the indivisible unity of the hypostasis [=Person] of the Incarnate Word. Everything became new. Thus was accomplished the pre-eternal mystery and council of love divine. “He, who established the being of every creature, visible and invisible, by a sole act of will, before all ages and before the existence of the creaturely world, determined ineffably that He himself should truly become united with human nature in the true unity of his hypostasis [=Person], thus making man God through union with him.” So spoke St. Maximus the Confessor about the pre-eternal council of God. God creates the world and reveals himself in order to become a man in this world. Man is created in order that god may become man and it is by this union that man is deified. Or as St. Irenaeus of Lyons expressed it: “The Son of God became the Son of man in order that man would become the Son of God.” This purpose was realized in the mystery of Christ’s birth, when the foundation of the Church was already prefigured.

But the road from Bethlehem to Zion is long, and is leading us through Gethsemane and Golgotha. Already in Bethlehem the newborn Godchild is presented with funeral offerings by the Wise Men from the East. “Today God leads the Wise Men to worship through the star, prefiguring His three-day burial in gold, frankincense, and myrrh.” The very doors of the Bethlehem cavern are nearly stained with the innocent blood of the children who were killed for Christ’s sake. The way of the Cross is mysteriously foreshown. The Lord is born for this very hour of the Cross, “For this cause came I unto this hour.” (John 12:27) The Lord is born for death and crucifixion: “He had a body that he might take death upon himself.” So wrote St. Athanasius the Great. Through the voluntary passion and death is the Christmas joy transfigured into Resurrection joy. This is the second and higher victory of life. In the very birth of Christ the order of nature is potentially overcome. It is not so much that the natural birth is sanctified as that the higher is prefigured and revealed. “The tongue cannot tell the mystery of thy birth.”

In the birth of Christ is revealed not only the glory of Godmanhood, but also the mystery of Godmotherhood. The Church testifies to the mystery of the Incarnation in very precise and vigorous terms, calling us to a responsible firmness and exactness in our confession of faith. Through the use of the important name “Theotokos” the Church confesses the glory of the divine Incarnation, the glory of the Only Begotten who was then born of the Virgin, according to his humanity. St. John of Damascus said: “This name includes the whole mystery of salvation.” For this glorious name testifies to the oneness of the divine human personality. We contemplate the duality of natures in the inseparable unity within the indivisible hypostasis [=Person] of the Incarnate Word. To the Indivisible One are ascribed both glory and humiliation. “If the one who gave birth is the Mother of God, then the One who is born of her is a true God and a true man. For how could God, having existed before all ages, be born of a woman without becoming man!”

The incomprehensible mystery of Godmotherhood is not exhausted by birth only, even as natural motherhood is not exhausted by the fact of physical birth. The fulfillment of motherhood lies in sacrificial love. By this love for the one born the passive self-centeredness of the heart is broken. In this love is shown the natural image of love for another person, for the neighbor. “As thou lovest thyself.” In its depth and its fulfillment motherhood has not only a physical, but also a spiritual meaning. These features of the true natural motherhood are transcended in the ineffable virginal Godmotherhood. The love of the Virgin for the one who was born of her can be neither transient nor limited.

In the mystery of Incarnation the Divine Love is disclosed as descending and bringing peace and goodwill into the world. But human love is also disclosed as answering the Divine Revelation in meekness and obedience.

“If one should ask what we are worshipping and adoring, the answer is ready: we are honoring love.” (St. Gregory of Nazianzus) “For God so loved the world that He gave His only begotten Son…” (John 3:16)

This is the mystery of Christmas—and now in the days of sacred memories we sing and solemnize it. We are remembering not only what has already happened and passed, but that which was fulfilled.

CHRYSOSTOM was a powerful preacher. He was fond of preaching, and regarded preaching as the duty of a…

“This is the day which the Lord hath made; let us rejoice and be glad therein.” Pascha is…