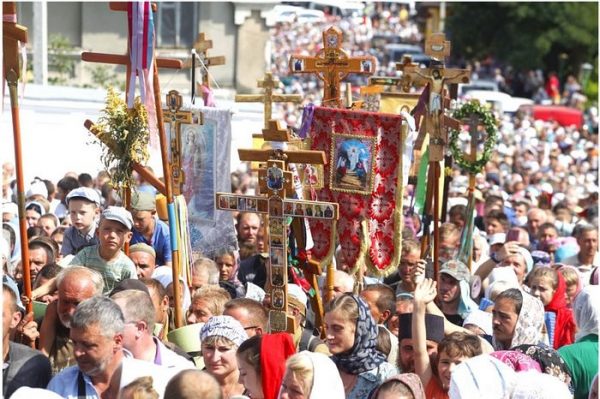 Every year, multiple cross processions set out from various points throughout Ukraine, headed for the sacred Holy Dormition Pochaev Lavra to celebrate the Great Feast of the Mother of God. The Ukrainian faithful are traditionally joined by pilgrims from other Orthodox countries as well.

Several tens of thousands of pilgrims arrived to the Lavra on Sunday in a procession that began on the feast of Transfiguration, August 19, in Kamanets-Podolsk, reports the monastery’s website. Met. Vladimir greeted and thanked the pious pilgrims for their devotion to the Mother of God, noting that by the procession they “we confirmed what we believe, and our works show that our faith is alive.” The pilgrims were then sprinkled with Holy Water and invited to a meal at the monastery.

The procession was easy and joyful this year, Abp. Job told the Union of Orthodox Journalists. “Apparently, after these past tense years in our country, enmity towards our Church has subsided.” Another procession arrived yesterday, having set out from the Holy Trinity Monastery in Brailov, reports the Information-Education Department of the Ukrainian Church. The pilgrims, led by His Eminence Metropolitan Barsanuphius of Vinnitsa, covered more than 160 miles in 8 days, singing prayers and akathists for peace in Ukraine and for the entire Orthodox Church along the way. The pilgrims were met by the brothers of the monastery. “We hope that your prayers will be taken up by the angels of God and carried to the throne of God,” one of the monks said. They also expressed the hope that the prayerful podvig of those who made the procession would serve as a good example for others.

The Ukrainian pilgrims were joined by faithful guests from Australia, Russia, Moldova, Belarus, Georgia, and Poland.