Three Candidates for the Office of Metropolitan Chosen

Source: Antiochian Orthodox Christian Archdiocese of North America
Natalya Mihailova | 06 June 2014
On June 5, 2014, hierarchs, clergy, and laity delegates convened in Chicago, IL at the Hyatt Regency Hotel to participate in the historic Archdiocese Special Convention, with the purpose of selecting three candidates whose names will be submitted to the Holy Synod of the Patriarchate of Antioch for the office of Metropolitan of the Antiochian Archdiocese of North America and Canada. 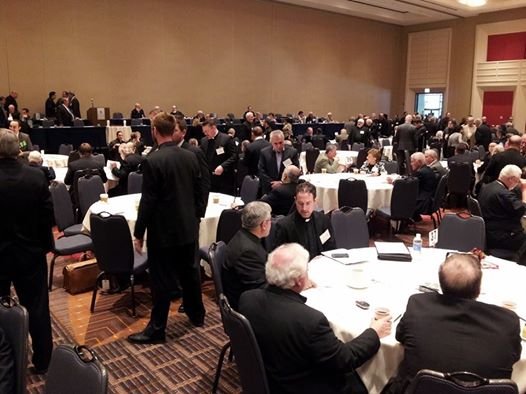 Vicar General for the Antiochian Archdiocese The Very Rev. Thomas Zain was interviewed by Ancient Faith Radio immediately following the vote, announcing that the Special Convention has nominated the following (in alphabetical order): The Right Rev. Bishop Basil, Diocese of Wichita and Mid-America; The Right Rev. Bishop John, Diocese of Worcester and New England; and The Most Rev. Archbishop Joseph, Diocese of Los Angeles and the West and Locum Tenens for the Diocese of Eagle River and the Northwest.

In the interview, Fr. Thomas also thanked Metropolitan Silouan of Buenos Aires and all Argentina, who has served as the Patriarchal Vicar of New York and all North America since the repose of His Eminence Metropolitan Philip of Blessed Memory on March 19, 2014. “His Eminence has done a magnificant job of guiding us since he arrived here; he gave us a masterful speech of the land mines of this process and he anticipated our questions ahead of time. It seemed everyone is of one mind.”

“The Synod in Antioch has the right to choose any one of these three as the next Metropolitan. God willing, the Holy Spirit will work among them,” Fr. Thomas said.

Listen to the AFR interview

Most viewed articles
A Noetic Life54
Will Everyone Be Saved?49
We Must Pray for All: The Salvation of the World According to St Silouan29
Metropolitan JOSEPH’S Encyclical for the Year of Youth18
Patriarch Kirill Consecrates Restored St. Alexander Nevsky Cathedral in Volgograd9
“Basic Sight-Singing and Ear Training for Church Singers” Course to Begin October 49
The Birth of Our Most Holy Lady: Reason for Spiritual Joy and Exaltation1
Most popular authors
Archpriest Stephen Freeman53
Jacob Sparks49
Metropolitan Kallistos (Ware)29
Pravmir.com team18
Archbishop Joseph of New York and Metropolitan of All North America18
Maria Trushanina1
Archimandrite Ephraim of Vatopedi1