Up to100,000 believers join ranks in Cross-procession in Kiev

Source: TASS: Russian News Agency
The all-Ukraine Cross-bearing procession in the name of peace, love and prayer began in the east of Ukraine on July 3 and in the country’s west on July 9
Natalya Mihailova | 28 July 2016
KIEV, July 27. /TASS/. More than 80,000 people joined ranks on Wednesday in a Cross-bearing procession that thronged down Kiev streets to the world-famous Monastery of the Caves, more broadly known as the Pechersk Lauva (the latter word meaning a monastery of the highest rank, officials at the information department of the Ukrainian Orthodox Church reporting to Moscow Patriarchate said on Wednesday. 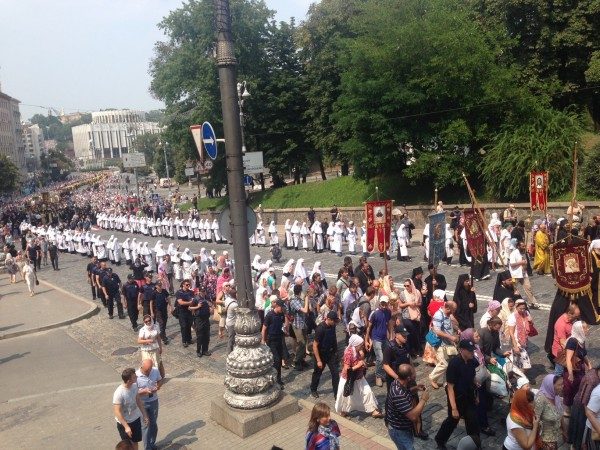 “Even the roughest estimates show from 80,000 through to 100,000 people took part in the celebrations,” a spokesman for the department said.

Like in all the major religious processions in the realm of Eastern Orthodox Christianity, participants in this processions carried miracle-working icons with them. The column of believers that moved from the east of the country to Kiev carried the icon of the Virgin Mary of the Holy Mountains, while the column that moved from the West brought along with it the icon of the Virgin Mary of Pochayev. 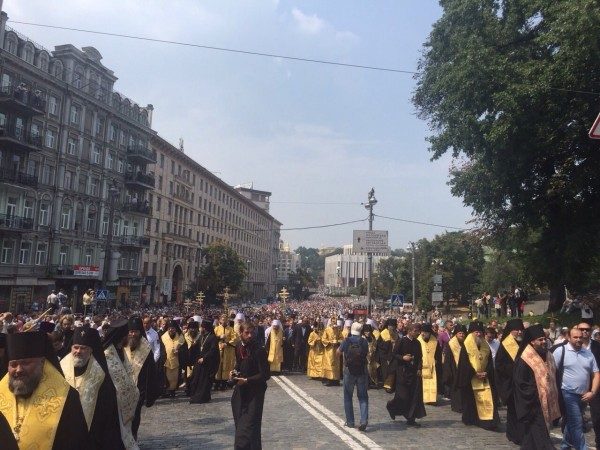 The pilgrims had a prayer on St Vladimir’s Hill in Kiev earlier in the day and then moved towards the Pechersk Laura. A vast vespers service was conducted in the open air on the square in front of the Laura’s Assumption Cathedral.

A liturgy will be chanted on Thursday morning at the same site.

The all-Ukraine Cross-bearing procession in the name of peace, love and prayer began in the Holy Mountains Laura in the east of Ukraine on July 3 and in the Pochayev Laura in the country’s west, on July 9.

The believers entered Kiev in two columns on Tuesday.

They were taken by busses to the St Vladimir Hill from the camps on the compounds of Orthodox churches where they had stayed for the overnight. Upon converging into one column, they had a collective prayer, after which they walked down the city streets to the Laura,

All the events were quiet and peaceful, with about 6,000 policemen guarding law and order.

The number of believers who took part in the all-Ukraine action in the name of peace, love and prayer on Kiev streets shows the true moods that Ukrainian society lives by, the Opposition Bloc party said in a statement in connection with the Cross-bearing procession. 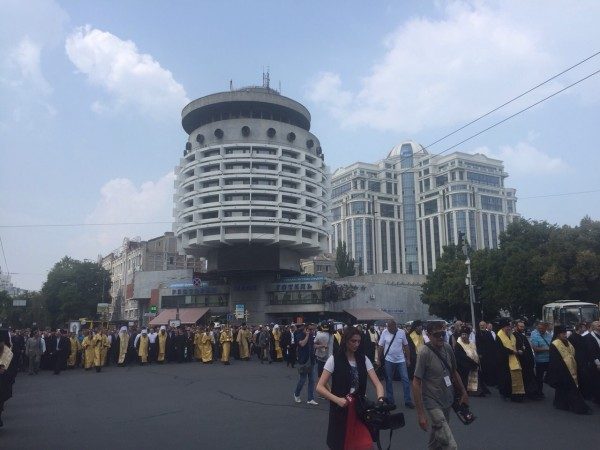 “Mass participation of Ukrainians in the Cross-bearing procession for peace showed the true moods that are widespread in society today,” the party said. “The collective prayer on the St Vladimir Hill where the two columns of believers, one moving from the east and the other, from the west, met together showed that this country is united in its desire to live in peace.”

Participants in the procession spent three weeks crossing vast spaces so that they could “show through prayer their will to live in peace and unity and to pray together for an end to war, as well as for a return of tranquility and stable life to Ukraine.”

In order to continue a broad public dialogue, the Opposition Bloc is initiating the creation of a public platform entitled ‘National Dialogue on Peace’. It invites all the political organizations concerned, religious denominations and peacemaking public associations to join in.

In connection with the all-Ukraine action of the canonical Ukrainian Orthodox Church, which reports to Moscow Patriarchate, the Opposition Bloc has demanded once again that the authorities heed the voice of the rank-and-file Ukrainians and start making real practical steps to end the armed civil conflict in the east of the country.