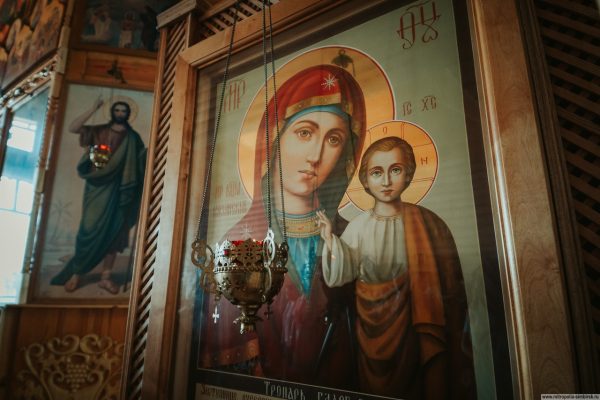 The Commemoration of the Deliverance of Moscow From the Poles by the Kazan Icon was established in gratitude for the deliverance of Moscow and all Russia from the incursion of the Polish in 1612. The end of the sixteenth and beginning of the seventeenth centuries is known in Russian history as “the Time of Troubles.” The country suffered the onslaught of Polish armies, which scoffed at the Orthodox Faith, plundering and burning churches, cities and villages. Through deceit they succeeded in taking Moscow. In response to the appeal of His Holiness Patriarch Hermogenes (May 12), the Russian people rose up in defense of its native land. From Kazan, the wonderworking icon of the Mother of God was sent to the army headed by Prince Demetrius Pozharsky.

St Demetrius of Rostov (September 21), in his Discourse on the Day of Appearance of the Icon of the Mother of God at Kazan (July 8), said:

“The Mother of God delivered from misfortune and woe not only the righteous, but also sinners, but which sinners? those who turn themselves to the Heavenly Father like the Prodigal Son, they make lamentation beating their bosom, like the Publican, they weep at the feet of Christ, like the Sinful Woman washing His feet with her tears, and they offer forth confession of Him, like the Thief upon the Cross. It is such sinners whom the All-Pure Mother of God heeds and hastens to aid, delivering them from great misfortunes and woe.”

Knowing that they suffered such misfortunes for their sins, the whole nation and the militia imposed upon themselves a three-day fast. With prayer, they turned to the Lord and His All-Pure Mother for help. The prayer was heard. St Sergius of Radonezh appeared to St Arsenius (afterwards Bishop of Suzdal) and said that if Moscow were to be saved, then people must pray to the Most Holy Virgin. Emboldened by the news, Russian forces on October 22, 1612 liberated Moscow from the Polish usurpers. A celebration in honor of the Kazan Icon of the Most Holy Theotokos was established in 1649. Even in own day this icon is especially revered by the Russian Orthodox nation.

The Kazan Icon is also commemorated on July 21 (8).

O fervent Protectress, / Mother of the Lord Most High; / you intercede for all before your Son Christ our God, / granting salvation to all who seek refuge in your protection. / Protect us all, O Queen and Sovereign Lady, / for we are stricken with grief and wounded by sin. / With tears we stand before your pure Icon, / praying with contrite souls and humble hearts. / All our hope we place in you, / May we be delivered from evil. / Grant to all what is expedient, / and save all, O Virgin Theotokos: / For you are the Holy Protection of your servants!

Let us run to the gracious and quiet haven / the fervent helper, ardent and eager to save all. / Let us run to the Virgin’s protection and hasten to repentance. / The pure Theotokos grants us unfailing mercy / she comes to help all, delivering her faithful servants from tribulations!