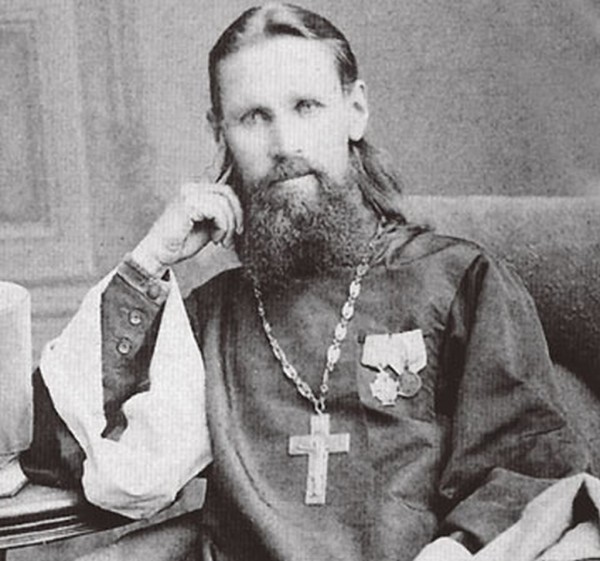 St John of Kronstadt was born in the village of Sura in Archangel province on October 19, 1829, and was called John in honor of St John of Rila (August 18). His parents were very poor but were very devoted to the Church. Even though he was poor, as a young boy John learned to feel compassion for others in their misfortune. His neighbors frequently asked him to pray for them, as they noticed this special grace-endowed gift in him. When John was ten, his parents were able to raise some money and send him to the local school which was attached to the church. At first, the boy had an extremely difficult time with his studies. He worked for days on end, but still failed to keep up. 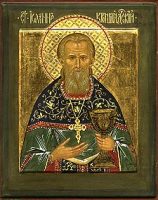 Writing about his life he once recalled an evening when everyone had already gone to bed. “I could not sleep, and I still failed to understand anything I was taught. I still read poorly and could not remember anything I was told. I became so depressed I fell to my knees and began to pray. I don’t know whether I had spent a long time in that position or not, but suddenly something shook my whole being. It was as if a veil had fallen from my eyes, and my mind had been opened, and I remembered clearly my teacher of that day and his lesson. I also recalled the topic and the examples he had given. I felt so light and joyous inside.” After this experience he did so well he became one of the first in his class to be chosen to go to seminary, and after seminary to the Theological Academy in St Petersburg (a great honor at that time).

Throughout his studies, John thought about the importance of forgiveness, meekness, and love, and came to believe that these were the very center and power of Christianity, and that only one path – the path of humble love – leads to God and the triumph of His righteousness. He also thought a great deal about the Savior’s death on the Cross at Golgotha, and pitied those who did not know Jesus Christ. He wished to preach to them about His death and Resurrection. He dreamed about becoming a missionary to distant China, but saw that there was a great deal of work for a genuine pastor of Christ’s flock both in his own city and the surrounding towns.

When John graduated from the Academy he met Elizabeth Nesvitsky who lived in the town of Kronstadt. They dated, he proposed, and they were married. After his studies, John still desired to learn more about his faith and his Church.

It was in this frame of mind that he prepared to be a priest and to enter public ministry. He was ordained a deacon on December 10, 1885, and then priest on December 12. He was assigned to St Andrew’s Cathedral in the city of Kronstadt. He said, “I made myself a rule to be as sincere as possible in my work, and of strictly watching myself and my inner life.”

Fr John wanted most of all to earn the love of the people in his care, because only a loving attitude could provide the firm support and help he needed as he faced the difficult work of the priesthood. His constant thought was how he would come before the Last Judgment and have to give an account, not only for his own deeds, but also the deeds of his flock, for whose education and salvation he was responsible. To him no one was a stranger; everyone who came to him for help became a friend and relative. He would tell people “The Church is the best heavenly friend of every sincere Christian.” He conducted divine services daily and offered the prayers of the faithful. He called all who rarely receive Holy Communion to prepare themselves and live their lives in a Christian way so that they could receive more often. Listening to Fr John, many people changed their lifestyle, repented sincerely, and joyfully received Holy Communion on a regular basis.

At that time the government exiled murderers, thieves and other criminals to Kronstadt. Life was horrible for the exiles. Even children of exiles would become thieves and criminals. He would go to their dugouts, hovels and shacks to visit with them. Not satisfied with staying for five or ten minutes to administer some rite and then leave, Fr John believed he was coming to visit a priceless soul, his brothers and sisters. He would stay for hours, talking, encouraging, comforting, crying, and rejoicing together with them.

From the beginning he also concerned himself with the material needs of the poor. He would shop for food, go to the pharmacy for prescriptions, to the doctor for help, many times giving the poor his last few coins. The inhabitants of Kronstadt would see him returning home barefoot and without his cassock. Often parishioners would bring shoes to his wife, saying to her, “Your husband has given away his shoes to someone, and will come home barefoot.” He would also write articles for the newspaper exhorting the people of Kronstadt to “support the poor morally and materially.” These appeals touched the hearts of many and Fr John organized many charitable efforts. Realizing that his individual charity was insufficient for aiding the needy, he founded the Orthodox Christian House Parish Trusteeship of St Andrew the First-Called. This brotherhood coordinated many charitable efforts throughout the city and helped many needy people.

St John has performed more miracles than almost any other saint, with the possible exception of St Nicholas. Through his prayers he healed the sick, gave hope to the hopeless, and brought sinners to repentance.

Fr John labored endlessly in his work for the Lord preaching, teaching, and helping those in need. Having spent his entire life serving God and His people, Fr John fell ill and died on December 20, 1908. Almost immediately, people from near and far began to make pilgrimages to the monastery where he was buried. Even today millions of Orthodox Christians in Russia and around the world pray to him to intercede for them as he had always done from his childhood.

St John was glorified by the Russian Orthodox Church on June 8, 1990.