Tomos Signing Ceremony in Constantinople Ends with Shouts of “Glory to Ukraine!” 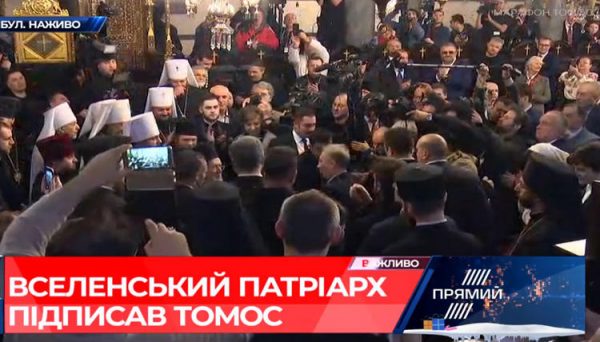 Istanbul, January 5, 2019 – Patriarch Bartholomew of Constantinople ceremoniously signed the tomos of autocephaly for the new nationalist Ukrainian church today, which he will give to its primate “Metropolitan” Epiphany Dumenko on January 6 during the Divine Liturgy.

The ceremony was broadcast live on Ukrainian television.

The Ukrainian delegation included, in addition to Epiphany Dumenko, former Metropolitans Simeon Shostatsky and Alexander Drabinko, who apostasized from the Church of Christ to join the Ukrainian schismatics, two bishops from the “Kiev Patriarchate,” one bishop from the “Ukrainian Autocephalous Orthodox Church,” Parliament Speaker Andrei Paruby, and Ukrainian President Petro Poroshenko, the main architect of the new church, along with Pat. Bartholomew, who took center stage at December 15’s “unification council,” reports the Union of Orthodox Journalists.